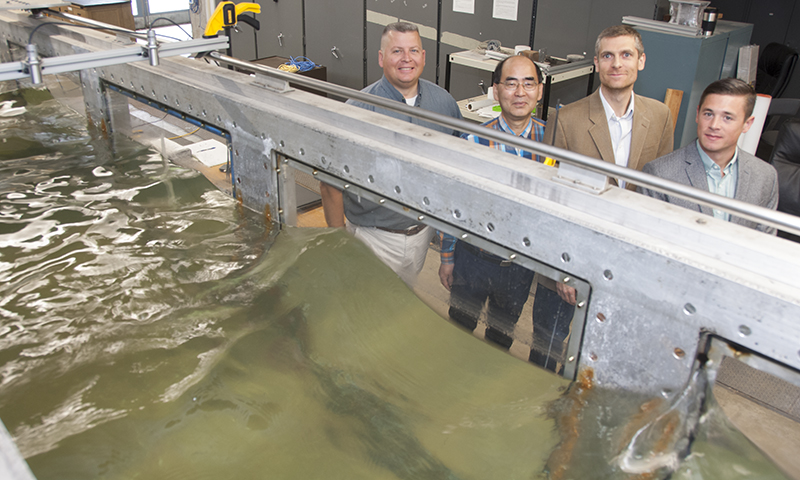 Researchers in NPS’ Departments of Mechanical and Aerospace Engineering (MAE), and Systems Engineering (SE), have given an old tow tank new life, completing the installation of a student-designed wave-making machine, providing enhanced research capabilities in several areas, including fluid mechanics and hydrodynamics.

“This tow tank was developed around 1970 by [NPS Distinguished Professor and Fellow] Dr. Turgut Sarpkaya,” said Distinguished Professor Young Kwon. “I took over it for part of my research to gather various types of data. We realized that we needed to have something to simulate sea waves, so you can see interaction with different structures and the waves.”

As part of his thesis, NPS graduate Ensign Ryan Tran designed the wave propagation machine that was then fabricated entirely in the MAE department, a project that took more than two years to complete. Research Assistant Professor Jake Didoszak worked with Tran, helping adapt his design to the existing tank.

“This will help a few departments, including systems engineering and mechanical engineering,” said Didoszak, emphasizing the interdisciplinary advantages of the new research tool. “It really falls into naval architecture, to some degree, with fluid dynamics and hydrodynamics, but also brings in control systems. Ultimately, this is going to assist with [research in] unmanned systems in the wave zone.”

Assistant Professor Joseph Klamo explains how the new capabilities of the tow tank will impact other research in the Systems Engineering department.

“Before, if you were doing ship pattern dynamics, you were pretty much just stuck towing a body through calm water. You would have short run lengths, and you had to keep your speeds pretty low,” explained Klamo. “With the wave maker now, you can explore the same things in waves, which is a much more interesting problem. You can explore zero speed type scenarios in waves. You can increase your run length, your model size, and you aren’t limited by the length of the tunnel. You get more capabilities.

“We have talked about a lot of things we envision using the tank for, but because we have waves now, we have opened this up to other departments,” continued Klamo. “Oceanography could be studying nonlinear wave interactions. You can have people who work on sensors or acoustics wanting to know how a sensor will work when you are near the surface. Lots of people outside fluid mechanics and hydrodynamics are interested in waves and the things they cause.”

Ensign Marshall Jones is a current NPS student in the undersea warfare program studying mechanical engineering. His thesis work is to create a virtual model based upon the wave propagation machine to allow for larger scale and longer timeline research projects. To accomplish this, Jones is utilizing a high-performance computational fluid dynamics software tool.

“Working with the wave machine, there is another side to this, a computational side by simulating what is going on in this tank in a virtual environment through a program called ANSYS CFX,” said Jones. “Basically, what I am trying to look at is if ANSYS CFX is valid and suitable for doing experiments in the wave maker in the virtual domain for different situations where the tow tank would not be available.”