NPS Faculty Deliver Cultural Education While Deployed with the Fleet

NPS Faculty Deliver Cultural Education While Deployed with the Fleet 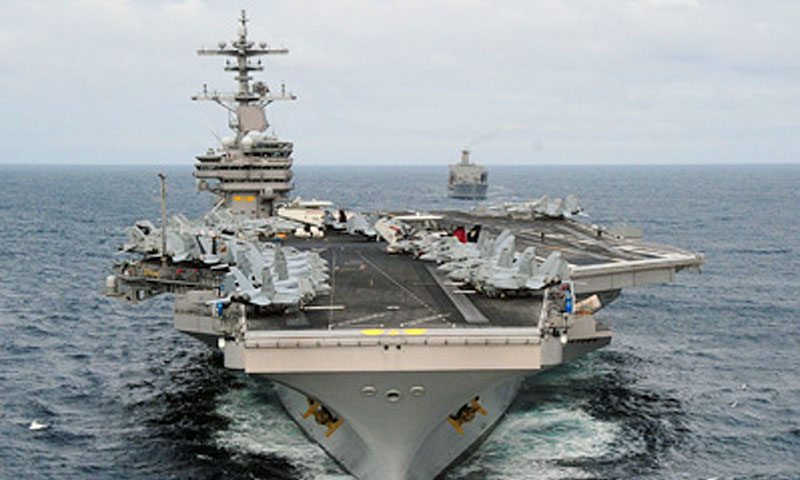 While the aircraft carrier USS George H.W. Bush (CVN 77) steams across the Atlantic Ocean on her maiden deployment, NPS faculty teams are on board delivering a series of educational lectures and training on language, regional expertise and cultural awareness. The George H.W. Bush has been deployed to the U.S. 6th Fleet area of responsibility in support of maritime security operations and theater security cooperation efforts.

For soldiers, sailors, airmen and Marines deploying to unfamiliar regions, the challenging cultural, political and social differences can add to the pressures of the job at hand. Members of the U.S. military serve as representatives of their country, and are key to international relations and collaboration. The minute they step foot ashore overseas, each one of them becomes an ambassador for the United States.

The Naval Postgraduate School’s Regional Security Education Program (RSEP) brings the experts directly to the fleet, working with the Center for Language, Regional Expertise and Culture (CLREC) to offer briefings on the regions to which the Strike Groups will be deploying. The objective is not to provide tactical information or intelligence, but to give military personnel an understanding of the operational relevance of their mission within an historical and strategic  construct.

Most recently, the team briefed the leadership and crew of the George H.W. Bush Carrier Strike Group (GHWB CSG) for her maiden deployment, bringing a ten-day series of educational lectures and training on language, regional expertise and cultural awareness.  GHWB CSG will be supporting maritime and theater security operations in the Fifth and Sixth Fleet Areas of Responsibility (AOR).

With over 300 sessions aboard the USS George H.W. Bush, the RSEP and CLREC team tailored lessons to include presentations ranging from the “History of Afghanistan” to “Art of Speaking through an Interpreter,” all with the goal of giving GHWB CSG’s 6,000 sailors a better understanding of the region in which they will be working.

The value of cultural and regional understanding became clear after an attack on the USS Cole in the Yemeni port of Aden killed 17 sailors in 2001.

“RSEP was an outreach initiative of NPS following the bombing of USS Cole,” explained retired Rear Adm. Steve Loeffler, Senior Lecturer and Director of Program Development and Regional Security Education at NPS. “With many lives lost, and the investigation completed, the Chief of Naval Operations asked all the assembled Admirals why no one in Cole’s chain of command understood the dangers of sending Cole into Aden to refuel, and why no one understood the political climate, and problems in Yemen.”

“Now, under new directives from the Secretary of Defense, the services are required to provide Language, Regional Expertise and Cultural Awareness (LREC) to all deploying forces. And RSEP is part of the Navy’s LREC program.”

In 2008, the Chief of Naval Operations placed renewed emphasis on LREC, noting that education is key to not only understanding potential adversaries, but also to retaining allies. Because the oceans and seas borders on so many countries around the world, it is critical that sailors understand the best ways to serve as representative of the U.S military while deployed.

“The number and variety of cultures and foreign languages the Navy faces in this new environment far and away exceeds the level faced in the Cold War,” wrote then Vice Adm. John C. Harvey, Jr. in a 2008 U.S. Navy Language Skills, Regional Expertise and Cultural Awareness Strategy. Now a four-star, Harvey at the time was Deputy Chief of Naval Operations for Manpower, Personnel, Training and Education, and is currently serving Commander of the U.S. Fleet Forces Command. 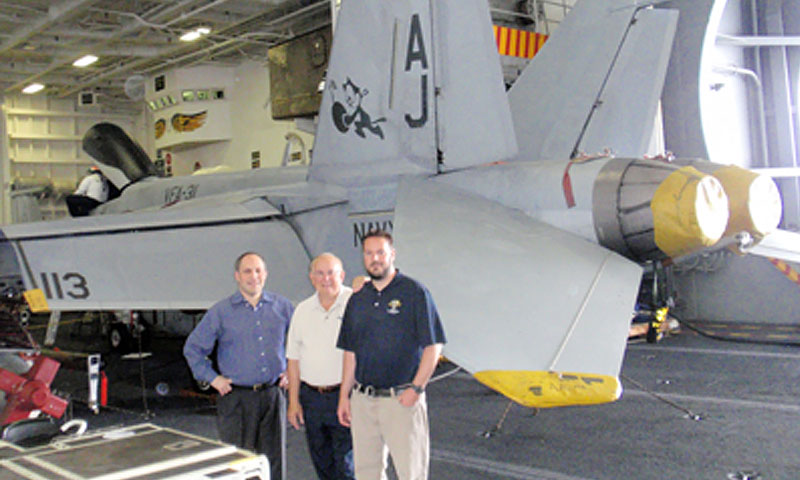 NPS’ Regional Security and Education Program Team, from left, Michael Ruben, Steve Loeffler and Matt DuPee in the hangar bay of the USS George H.W. Bush. The team delivered over 300 cultural presentations to sailors during a ten-day stay aboard the carrier.

“Strategic, operational and tactical success will depend to some degree on practical skill in less commonly taught languages,” he continued. “It will also require an awareness of unfamiliar regional cultures, many of which were long suppressed by foreign domination, and some of which are resistant to the 21st Century global system. Navy LREC competencies will be indispensable to penetrating cultural barriers, and understanding unfamiliar, ambiguous, and seemingly irrational behaviors.  Considering the cultural and linguistic diversity of this new security environment, we will require comparably diverse LREC capabilities.”

RSEP has brought regional education to Navy and Marine Corps deploying forces since 2001, and continues to look for new opportunities to deliver information to military personnel of all ranks in the maritime domain. In its first year, RSEP averaged five programs per year. Today, they average 10-13 annually, with growing interest from senior leadership. That growth has allowed the RSEP team to foster new relationships with regional experts at other universities to help provide the graduate-level briefings on all global issues and regions.

“When the program first began, our primary source was our own [National Security Affairs] faculty and other faculty with the regional expertise or knowledge of the issues at hand,” said Loeffler. “With the expansion of the program, we have significantly increased participation by faculty members from other universities including the Naval Academy, Harvard, Columbia and some of the University of California campuses.”

“RSEP seeks to prepare our forces to more effectively operate in a complex world where relationships matter, context counts, and perceptions have high potential to shape operational outcomes,” Girrier noted in a letter of appreciation to NPS leadership.

“The cultural awareness and historical perspectives RSEP provides will help maximize the effectiveness of Ronald Reagan Strike Group,” he continued, “and our Navy team across our many lines of operation in a diverse world.”

The RSEP and CLREC team also recently visited the USS Enterprise Strike Group to prepare the crew and embarked personnel for operations in the Fifth Fleet AOR.

“From my senior leadership to the most junior sailors and Marines, the feedback I received was overwhelmingly positive regarding the RSEP and CLREC presentations,” said Kraft. “This was a positive and valuable experience both for those with previous overseas experience as well as those on their first deployment.”