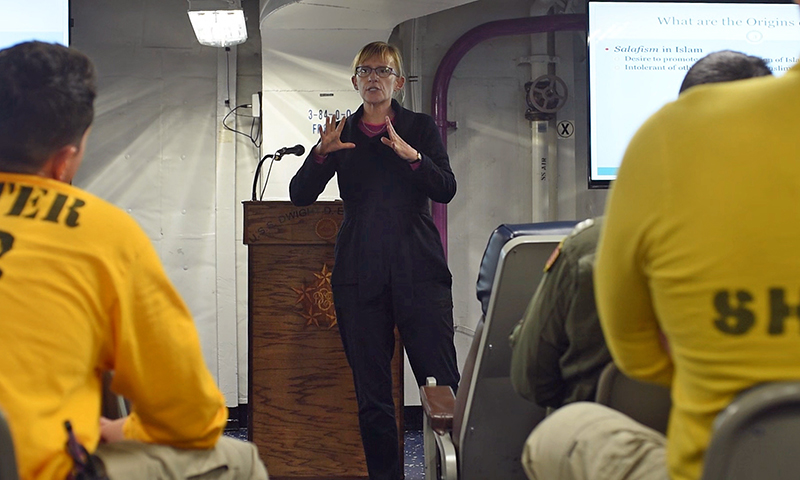 Dr. Heather Gregg, an Associate Professor in NPS’ Department of Defense Analysis, lectures on board the USS Eisenhower (CVN-69) as part of the Regional Security Education Program (RSEP) team. Through the program, faculty from NPS and leading universities across the nation join deploying forces to provide key members of the crew with custom briefings on current issues and the evolving culture within the regions they are deploying to.

When the USS Eisenhower arrived to Mediterranean Sea last week, a cadre of faculty from the Naval Postgraduate School (NPS) and other universities across the nation were part of the crew.

Dr. Heather Gregg, an Associate Professor in NPS’ Department of Defense Analysis, and Adjunct Faculty member Dr. Michael Rubin were on board to support the Regional Security Education Program (RSEP), providing key members of the crew with in-depth briefings on current issues and the evolving culture for the specific regions they are deploying to.

“I will be instructing on my specialty, which is causes and preventions of religiously-motivated violence,” said Gregg during an interview before her deployment. “I will also be looking at social movements with a focus on the Arab Spring, the Palestinian-Israeli conflict as a failed social movement, and the potential for a social movement in Iran.”

This was Gregg’s fourth RSEP team, having deployed with two other aircraft carriers and a Marine Expeditionary Unit on an amphib. Her experiences have taken her through Kantar, Israel, Palestine and neighboring regions.

“As a team, what we are trying to do is combine both the subject matter expertise and the frameworks for analysis,” said Gregg. “I’m going to be focusing on frameworks providing an overview of what social movement theory is.” The Social Movement Theory is an academic theory that looks at the conditions under which grievances are transformed into mass movements for political or social change.

Rubin is a veteran of the RSEP program, making his 16th deployment, all of which focused on his research into the Middle East, Turkey, Iran and diplomacy.

“RSEP was created as a program within NPS, and so it has sought out NPS instructors from the very beginning,” said Rubin. “The goal is to enhance situational, political and cultural awareness guiding events in the region beyond the day-to-day tactical issues upon which Sailors and Marines focus.”

The goals of RSEP continue to develop as conditions and threats in the region change. In the current security environment of the Middle East, certainly at the top of the threat list is the Islamic State, or ISIS.

Part of Gregg’s curriculum includes discussions on apocalyptic war, the belief that the faithful can bring about the end of the world as we know it.

“Most religions have an expectation of the end of times, and that there are signs that accompany the end,” explains Gregg. “In the context of an apocalyptic war, there is a charismatic leader who stands up and says, ‘These are the end of times, these are the signs, and this is what the faithful need to do.’”

With the continuing social and political strife in the region, Gregg remains optimistic that a positive outcome will emerge.

“I think that the Arab Spring shows that average people want things that [Westerners] have, civil liberties, freedom of speech, and freedom of the press. They want the right to choose their sovereign leadership, and I think that is encouraging,” said Gregg. “As with most democracies, this is a process that takes time.”

“Not only do subject matter experts get to go into detail in their fields of their expertise, but being onboard a deployed ship and seeing how the Navy works is an education for any civilian instructor or professor who might teach at NPS but never have served in the Navy,” said Rubin. “To come off each RSEP trip is to gain a far greater understanding about how the U.S. Navy works, and makes us far more effective instructors.”