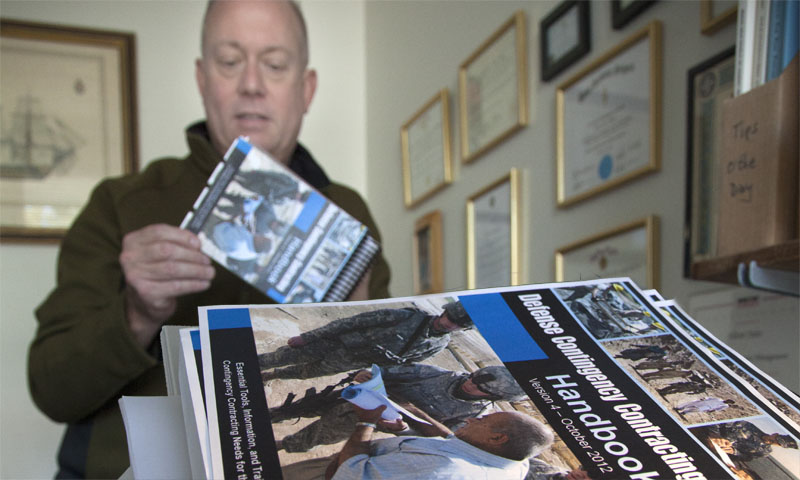 NPS Senior Lecturer E. Cory Yoder displays a copy of the Defense Contingency Contracting Handbook he played a lead role in authoring. The handbook will be used by service members and Department of Defense employees around the globe to ensure contingency contracts are executed ethically and effectively.

Contract procurement during contingency operations has become increasingly important to mission success in post disaster operations, and in high-conflict areas like Iraq and Afghanistan. Contracting officials in both stateside and overseas contingency operations require specialized training in what can be challenging operational environments.

“In the past, we sent guys into the field without the proper training,” said Yoder. “Regulations were violated because the people on the ground did not have the tools and training necessary to get the job done.”

This becomes especially problematic in places where business practices deviate from Western norms. Contracting in the Middle East has proven to be particularly difficult. Gift giving is a common Middle Eastern practice and it is not unusual for Middle Eastern contractors to employ family members or members of a particular ethnic community. The latest guidebook deals with these and other challenges faced by contractors in a contingency environment.

Yoder’s involvement in the DCCHB came about after a series of papers written by Yoder about the contracting process in Iraq and Afghanistan were recognized.

“I had written some papers, published by the NPS Acquisition Research Program, and was not aware of their impact. I later learned that they were picked up by Dr. Jacques Gansler, the former Under Secretary of Defense for Acquisition, and lead author of ‘Urgent Reform Required: Army Expedition Contracting – Report to Congress,’” said Yoder. “He used my papers to make recommendations to congress … My recommendations were eventually incorporated into federal law.”

Yoder credits several of his colleagues at the Naval War College, the Defense Acquisition University and contributors from the Department of Defense for collaboration on the current edition.

“This wasn’t an individual effort by any means … a lot of people were instrumental in all aspects of program management, production, and content, the specialists on the working group, the program office at DPAP [Defense Procurement and Acquisition Policy] including, but not limited to U.S. Air Force Lt. Col. Anne Christianson, and the LMI contracting team, including Chris Coy, among many others, were instrumental in making the book a success,” said Yoder.

“Naval War College Associate Professor Dr. Dayne Nix and William “Bill” Long, a professor at the Defense Acquisition University, were instrumental in re-writing the book,” continued Yoder. “Bill was instrumental in developing the very first DCCHB, and we’ve been involved ever since.”

Yoder also solicited information and lessons learned from students in his contingency contracting course at NPS.

The handbook is already showing promise and has received encouraging feedback from senior leaders and project sponsors.

“Professor Yoder's work on the Defense Contingency Contracting Handbook is a prime example of the close interrelationship between our faculty, our students and our research and curriculum sponsors,” said the Dean of NPS’ Graduate School of Business and Public Policy School, Dr. Bill Gates.

“To capture the latest regulations, policies and best practices for contingency contracting, our contracting program sponsors sought the expertise residing at NPS. They asked Professor Yoder to co-author a handbook that will be issued to operational contracting officers throughout the world,” continued Gates.

Nix worked with Yoder to ensure that the handbook emphasized the role of contracting officials in the joint planning process. Nix teaches operational planning at the Navy War College.

“I work hard to make sure that individuals involved in contracting are incorporated into the planning process … In the operational world we live in today, contracting is a very important aspect of what we do,” said Nix. “In modern conflicts, up to 50 percent of personnel are contractors … It is necessary to have a contracting officer on the combatant commander’s staff.”

“Wars today are fought jointly, everyone that is involved in operational planning needs to understand how the joint world operates,” continued Nix.

But its not just joint operations and remote locales that make the contracting world so challenging; the contracting process itself is inherently difficult. Contracting is governed by myriad regulations, laws and procedures, which are coupled with documentary requirements, and local protocols than can easily overwhelm a non-specialist.

“In contracting there is a great deal of legislation,” said Yoder. “Protocols, checks and balances, no one can remember them all. We began to ask ourselves, ‘how do we change things to meet the unique requirements of men and women in the field?’”

The latest handbook is, amongst other things, Yoder’s attempt to answer that question. In addition to information on basic contingency contracting, the updated handbook features information for senior officers who are transitioning from tactical contracting to operational and strategic-level contracting, and contains links to training, Power Point presentations and exams.

Of note, Anne Christianson, when PM at DPAP on the project, was instrumental in bringing my work into the prior editions of the handbook, helped include papers that I had published, and was key in getting my name and the Naval Postgraduate School name into the prior editions of the book.   For the current edition, DCCHB V4, I worked closely via online communication and phone with LMI contractor Chris Coy, in particular for the work that Bill, Dayne and I did, along with essential content elements that I worked with students in the MN3318 Contingency Contracting course.