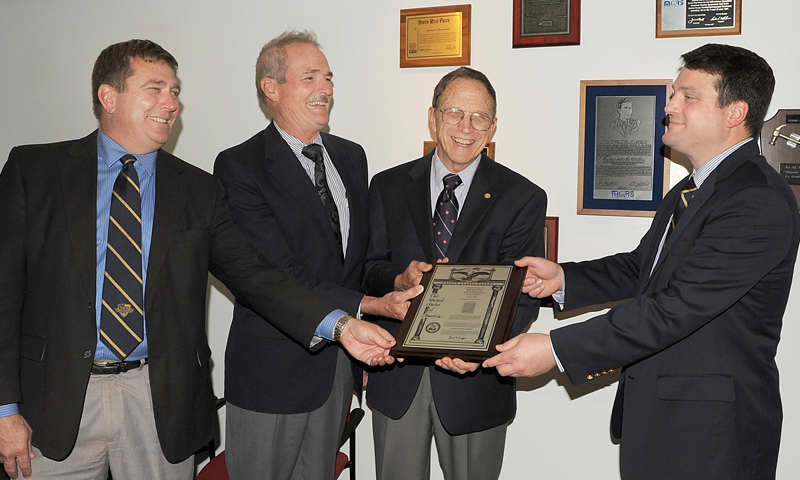 From left to right, NPS Senior Lecturer Jeff Kline, and Distinguish Professors of Operations Research (OR) Gerald Brown and Alan Washburn, present a plaque noting their newly-secured patent – a transit planner for “Mixed-Mode Fuel Minimization” – to OR Professor and Chair, Dr. Robert Dell.

NPS Senior Lecturer, Jeff Kline, recently saw years of research pay off in a big way when he received a U.S. Government patent for an idea sparked 20 years ago when he applied his NPS Operations Research (OR) education while a ship’s Commanding Officer in the fleet.

An abstract on the patent explains the fuel-saving concept that is now property of the Navy.

The initial transit planner was developed in 1992 after Kline, then a Lieutenant Commander, took command of the Navy’s few Pegasus-class hydrofoils, the USS Aquila. Applying concepts learned in his OR studies, Kline decided to run the hydrofoil’s duel engines in a way that would significantly reduce the amount of fuel being used, without compromising the ship’s performance.

“I started getting impressive fuel savings relative to the other hydrofoils in the class,” Kline recalled. “Our commodore noticed that we started getting fuel savings, so he sent his combat systems officer down to go through the plant to talk to the engineer and me to find out what we were doing different.

“Our schedule was the same, yet we were getting five to ten percent savings in fuel over the other ships,” he continued. “He thought it might have been a mechanical issue and he wanted to understand how we were configuring the engineering plant. I knew that it was simply an extended use of this little fuel planner that I had designed and provided to my navigator and engineer. And we executed our operations based on that.”

Impressed with Kline’s plan, the PHM (Patrol Hydrofoil Missile) squadron started using it with the other hydrofoils as well. The plan, however, was short-lived with the decommissioning of the hydrofoils only months later.

Pleased with the results of his fuel-saving plan, however, Kline sent a letter to his former professor at NPS, Dr. Rick Rosenthal, sharing what he had done. That letter re-appeared when Kline returned to NPS as a Senior Military Faculty member in the OR Department, and got other faculty members engaged in ironing out the applications of his plan.

“When Jeff joined our faculty, we decided to see if any other Navy ships could benefit, and once we got our hands on engineering data for fuel consumption, we discovered potential savings in every ship class,” explained Brown. “With some ship designs, this offers savings on the order of eight percent.”

The patent represents a technique that the OR faculty believe has incredible potential to save fuel, and cut costs in the long term. This falls in line with Secretary of the Navy Ray Mabus’ energy initiatives for the Navy, which includes reducing energy consumption in the fleet.

“Secretary Mabus set up NPS’ energy curriculum, and we hope to capture several students from that curriculum and employ this planning technique to the littoral combatant ship squadrons,” explained Kline. “This is perfectly in line with the Secretary of the Navy’s initiative because we think that doing things smarter has the potential to actually save fuel using these basic principles and concepts.”

“We’ve shown how to save fuel using nothing more than mathematics,” Brown added. “There is no additional hardware, gismo or gadget required. Just follow the optimal policy we advise, and you save fuel. I would think the Secretary would be pleased with such a discovery.”

The goal is to get students in the future energy programs engaged in applying the transit planner in their theses, demonstrating concrete savings with other classes in the fleet. Kline foresees young officers taking the lead and being actively involved in finding new ways to implement and expand upon the transit planner.

“The students will strengthen their education by applying their analysis tools that they learn in class, and setting up an experiment to test that,” said Kline, “and then finally by having a real impact on the Navy, through their education and their experience.”