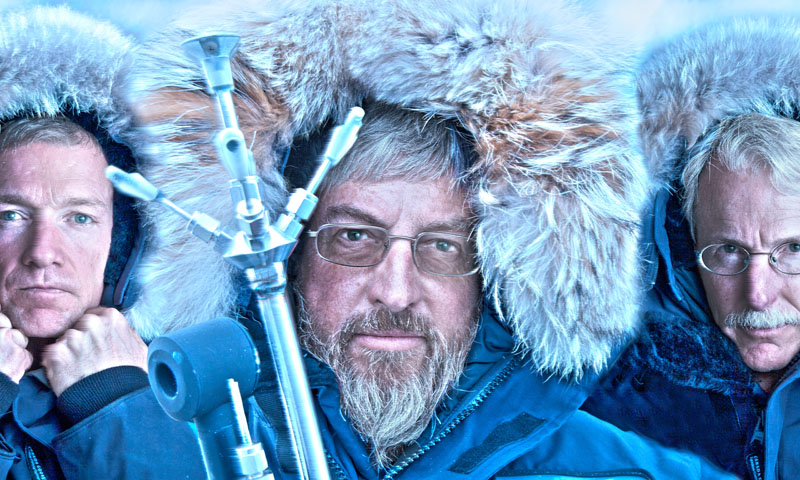 Naval Postgraduate School (NPS) Department of Oceanography Research Professor Tim Stanton is once again studying the effects of environmental change in the world’s polar regions, but this time he and his colleagues are turning their scientific gaze northward to the Arctic, where NPS-developed instruments and student researchers are examining the effects of climate change on rapidly-changing sea ice.

“We are doing a physical process study with the basic aim of improving the skill of coupled ocean/ ice/atmosphere models,” said Stanton. “High-resolution regional models are used to predict future ice conditions, and with large-scale changes in ice extent and thickness in the last decade, we need to consider new physical processes that arise from thin ice and lots of open water.

“The Arctic has regional importance, especially from a geo-political and economic standpoint and our long-term process studies in the Arctic are designed to improve the predictability of the ice cover models,” continued Stanton.

Key to understanding rapid ice retreat is an area known as the Marginal Ice Zone, the constantly evolving region where sea ice and open sea meet. Stanton hopes to be able to measure the combined effects of solar heat, waves, and momentum from winds that occur in this zone, and thereby understand how they contribute to the retreat and melting of ice.

“The more the ice retreats, the more energetic the wave field becomes, and the more destructive the forces leading to ice breakup,” Stanton explained. “We are enhancing our previous experiments with wave measurements and gauging the manner in which waves break up sea ice.”

This floe break up can lead to rapid thinning of the ice pack, which in turn lets more summer sun heat the ocean, contributing to the loss of even more Arctic sea ice.

“As more and more sunlight is absorbed by thinning ice, ice begins to melt from the bottom as well as the top,” noted Stanton, “leading to rapid ice floe volume reduction and more open water which absorbs more sunlight, which in turn leads to further ice melting.”

Stanton has been working in the Beaufort Sea for the last eight years. His latest project got underway last March, when NPS colleague Research Associate Professor Bill Shaw deployed two university-developed Autonomous Ocean Flux Buoys, instruments specifically designed to measure the vertical flux of heat, salt and momentum that are occurring between the ocean and Arctic sea ice.

“By measuring these small-scale physical processes, we can better represent them in large scale models,” said Shaw. “This data will feed large-scale models, including Navy forecast models.”

But before data could be collected, Shaw first had to travel to one of most remote sites in North America. He traveled via commercial air to Edmonton, Canada and then spent several days hopping from one small village to another via ‘milk runs’ [short flights between remote Canadian Settlements] before reaching a small Inuit village on Banks Island. From there, he traveled by Twin Otter aircraft to the sea ice.

“[The Twin Otter pilots] did not want to land on the ice until the sun was at a particular angle that allowed them to see the texture of the ice below, this led to shortened working days,” said Shaw. “To make up for lost time, I camped out on the ice in heated tents with researchers from the University of Washington.”

But Shaw is no stranger to living on the ice. He and Stanton were part of a groundbreaking study conducted over several years that detailed the rate at which ice is melting beneath Antarctica’s Pine Island Glacier. In terms of living conditions, however, there is a big difference between glacial ice in the Antarctic and the volatile sea ice of the Arctic’s Beaufort Sea.

“The Arctic sea ice is thinner and get pushed around by the wind and currents causing cracks and ridges. Often the ice is only about one meter thick, as opposed to Antarctic glacial ice that can be thousands of meters thick,” said Shaw.

If all goes well, Shaw’s efforts will pay off when the buoy clusters he deployed in the Beaufort Sea begin to take measurements of the Marginal Ice Zone as it progresses northward following the retreat of Arctic sea ice throughout the summer.

Also working on the project is NPS doctoral student Cmdr. Shawn Gallaher of Parkton, North Carolina. He is looking at the manner in which heat, deep in the ocean, mixes just beneath the ice and how it affects melt rates. To measure this phenomenon, he will travel to the Arctic with a South Korean team via the newly-commissioned South Korean icebreaker Araon in August.

“South Korea is a close ally and they were already going to the artic. ONR [Office of Naval Research] helped us to get on board, and we will spend a week on the ice living in ‘ice huts’ and then five weeks on the ice breaker.”

Once in the Arctic, Gallaher will deploy another set of specialized buoys from the Araon and conduct further experiments on the ice.

“My work is part of a larger ONR program that is looking at the Arctic Road Map laid out by the CNO [Chief of Naval Operations]. He is asking us to determine when we can go transpolar with shipping due to ice break up, and we are looking at how we can develop model improvements that can provide increased predictive skill in that regard,” said Gallaher.

If all goes as planned, Stanton and his team will be able to use data gleaned from their instruments to fill holes in existing models, and contribute to the growing picture of what Arctic sea ice is likely to look like in the near future.

For Stanton and Shaw, the exploration of the ice, on both poles, will continue far into the foreseeable future, but Gallaher will be taking his NPS education to another dynamic operating environment - the U.S. Naval Academy in Annapolis, Maryland.

“It’s an incredible opportunity, I have dreamed about this since I was commissioned,” said Gallaher. “I have gone back and forth between operations and academics, but when I learned that I might have an opportunity to teach, I jumped right in.”

Stanton is pleased that his investment into Gallaher and his doctoral education at NPS will contribute to the future of naval oceanography.

“It is very satisfying to know that he will be using the depth of his doctoral education to teach others oceanography at the academy,” said Stanton.