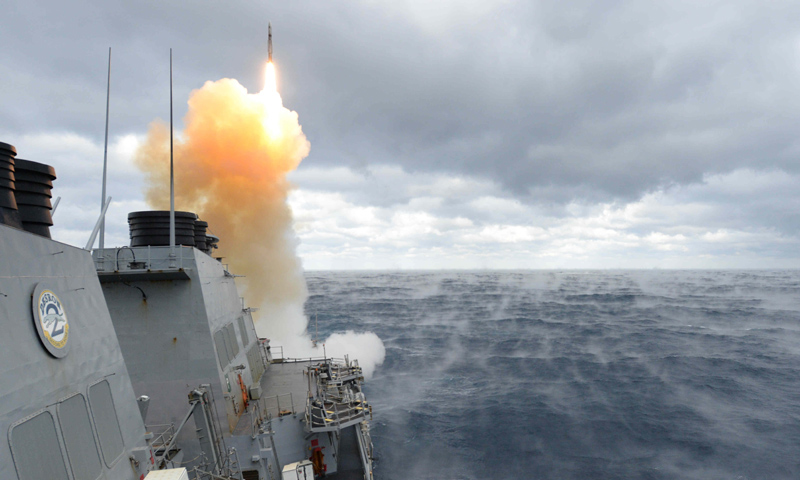 The Arleigh Burke-class guided-missile destroyer USS Laboon (DDG 58) launches an SM-2 missile during a training exercise with the Theodore Roosevelt Carrier Strike Group. With the development of the Joint Defender strategic missile defense tool at the Naval Postgraduate School, planners gain deeper insights in how to place assets such as the Laboon, even in full view of the adversary.

In May 2017, the United States successfully intercepted an intercontinental ballistic missile in the first-ever test of the U.S.’s long-range, anti-missile capabilities. While impactful, it is just the latest in a series of precautions the U.S. military has taken to counteract the increased threat caused by a series of nine separate missile tests North Korea has conducted in 2017 alone.

The U.S. has also begun deploying the Terminal High Altitude Area Defense (THAAD) missile defense system in South Korea, a U.S. Army anti-ballistic missile defense system designed to detect and intercept short-, medium- and intermediate-range ballistic missiles. This highly-publicized move, along with the increased presence of AEGIS equipped cruisers and destroyers, has been in full view of mainstream news outlets, and certainly of American adversaries.

But in the realm of strategic missile defense, how does the U.S. position its robust missile defense systems when doing so is in full view of the adversary? According to researchers at the Naval Postgraduate School (NPS), the answers can be found in a cutting-edge innovation developed at the university named Joint Defender.

“Joint Defender is a program that works using a relatively new mathematical technique known as bi-level programming which allows us to characterize how the enemy will plan his course of action if our course of action is known to him,” explained Distinguished Professor of Operations Research, Dr. Gerald Brown.

“Using this relatively sophisticated adjustment we are looking at all of our possible courses of action, along with all of theirs, to determine the best, worst-case scenario,” he continued. “Preparing a defense while all of your perpetrations may be visible to your adversary is difficult work. What we have done here is provide a mature, easy to use graphical user interface and decision support tool that gives you an optimal lay down of the worst-case scenario.”

The Joint Defender project was spearheaded by Brown, in partnership with fellow Department of Operations Research Professor of Practice retired Navy Capt. Jeff Kline, who drew inspiration for the program from his prior fleet experiences, and lessons learned as a graduate of NPS.

“When I was Deputy of Operations for 6th fleet, we began an operation to plan missile defense to guard against missiles going into southern Europe from possible strikes out of Libya,” said Kline. “We laid out a chart of the Mediterranean and used it as a template with overlapping engagement areas showing what would be the best coverage we could provide, and we did all this manually.

“But as a NPS graduate I was familiar with optimization, and realized there was a better way than manually placing interceptors on a chart,” Kline continued. “So when I arrived back at NPS [as faculty], we began working on how to best place theatre ballistic missile defenses in order to defend different cities and military installations, from the perspective of an optimization problem.”

After the initial research effort was completed, the first rendition of Joint Defender was briefed to the Navy Warfare Development Command who agreed to fund the project as an analytical tool to develop concept of operations for theatre ballistic and air defense concepts. The Office of Naval Research formalized it into a long-term research program in 2007, one of many optimization programs.

“NPS and the resources it provides have been critical in this program’s development,” said Kline. “You couldn’t develop it anywhere else. The modeling that was used in its development was invented here by members of our own Operation Research Department, and any replication of it is simply a mirror of what they have come up with.”

Designed with flexibility in mind, the system has the ability to recalibrate and produce new scenarios in a matter of minutes by automatically inputting enemy positions, as well as taking into account multiple arrays of missile defense capabilities and variables, such as coordinating locations of Patriot missiles, AEGIS class ships, and THAAD defense systems, along with the value of what the planner is trying to protect in order to provide optimal overall missile defense.

“The program is basically a Microsoft Excel spreadsheet on steroids,” said Kline. “It is completely licensed and owned by the Navy, and only requires the planner to have basic knowledge of
the software. The real art behind this is that the program can solve these problems in a visual package so they can be easily shared and transported over networks.”

Joint Defender has been used in multiple wargaming scenarios by NPS and the Naval War College. Additionally, it was used in a study by staff of the Commander, U.S. European Command to help determine best location for the strategic defense of Europe. This analysis reinforced the argument to put the AEGIS Systems ashore with Standard Missile 3 (SM3) interceptor capabilities, to protect from potential launches from the Middle East.

“There has been a lot of positive feedback on the program, with praise especially for its exploratory functions and the ability to change assumptions quickly to see how robust solutions are,” said Kline. “We began the wargaming process, with one side using traditional planning and techniques, while the other side used Joint Defender. It wasn’t very long until a lot of planners were migrating to using our automated tool.”

It won’t be long until planners across the Navy gain some experience with Joint Defender. The Navy Command and Control Program Office of the Navy’s Space and Naval Warfare Systems Command, which provides operational and tactical command and control capabilities by integrating real-time and near real-time representations of tactical situations, is currently in the process of integrating Joint Defender into their combat suite, in development for use by 2025. However, Joint Defender is also available now to theater ballistic missile defense staff planners across the force.