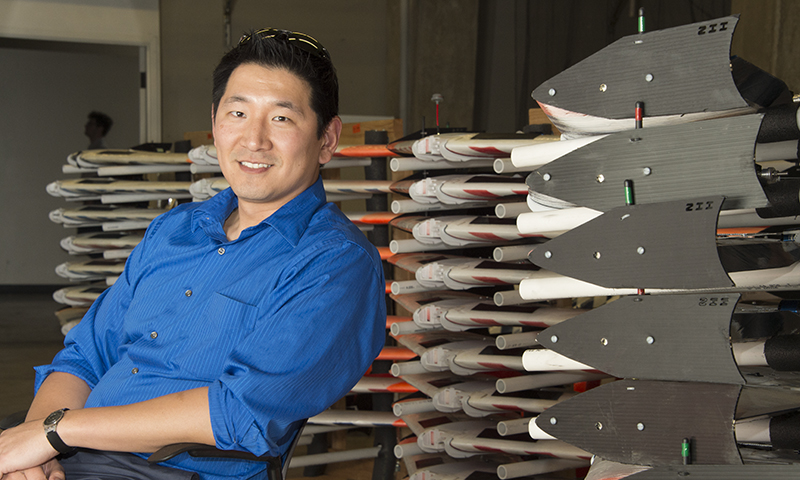 NPS Department of Systems Engineering Associate Professor Timothy Chung is one of two NPS faculty honored with the revamped Menneken Award for Highly Meritorious Research. In a departure from past years, the NPS Foundation-led award and selection committee selected two winners for the honor, Chung shares the award with Graduate School of Business and Public Policy (GSBPP) Associate Professor Nicholas Dew.

The Naval Postgraduate School (NPS) recently announced the recipients of the 2015 Menneken Awards. NPS Dean of Research Jeff Paduan made the announcement which included the introduction of a new faculty award for senior faculty members.

“This year we created two Menneken Awards, one for a senior faculty member that has exhibited ‘significant and sustained contributions’ and another for a more junior faculty member for ‘highly meritorious research,’” said Paduan.

NPS Professor Clay Moltz was named the recipient of the 2015 Menneken Faculty Research Award for Significant and Sustained Contributions. And in another twist, the award for excellence in scientific research will be shared by two recipients, Associate Professor Nicholas Drew with the Graduate School of Business and Public Policy and Systems Engineering Assistant Professor Timothy Chung.

The Menneken awards recognize research that has had an identifiable impact on the Navy or Department of Defense. Moltz’s numerous publications and his contributions to both academia and national defense certainly fit the bill.

“This award is truly one of the highlights of my career. I am very thankful to have two such supportive department chairs in Mohammed Hafez and Rudy Panholzer,” said Moltz. “The Menneken family has created a valuable, ongoing incentive for NPS faculty, especially in our current budgetary environment.”

Over the course of his distinguished career, Moltz has made countless contributions to NPS’ Space Systems Academic Group (SSAG), the Department of National Security Affairs (NSA), and with the Project on Advanced Systems and Concepts for Countering Weapons of Mass Destruction. He has also lent his expertise as an adviser to the office of the Secretary of Defense, the State Department, NASA’s Ames Research Center and the Department of Energy.

“I am grateful to the NPS Foundation for creating this new, senior faculty award and recognizing the importance of research accomplishments. People in Washington need to recognize that research is what makes NPS a force multiplier for the Navy,” said Moltz. “This award is really a tribute to the strength of the NPS community. I’ve benefited immensely from cooperative opportunities opened up by my SSAG and NSA colleagues.” 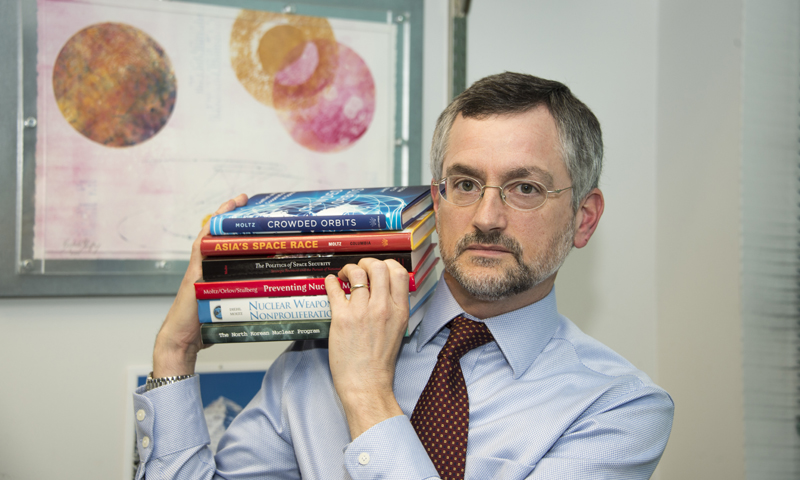 NPS Professor Clay Moltz holds a collection of his latest works covering international space security and policy in his Glasgow Hall office, Jan. 11. Moltz, who holds a dual appointment in NPS’ Department of National Security Affairs and the Space Systems Academic Group, has been named the 2015 recipient of the Menneken Faculty Research Award for Significant and Sustained Contributions.

“It is an honor to receive this Menneken Award, which highlights the collective achievement of a talented and inspiring team,” said Chung. “This recognition serves to remind us that innovation is born of conversation and collaboration. With this tenet in mind, I intend to continue these various research initiatives in the future through active engagements across students, faculty, warfighters and the Fleet."

Dew, who shared the award with Chung, is also an advocate for innovation.

“I was delighted to receive this award. Traditionally, it has been given to faculty with expertise in the areas of science and technology. It’s wonderful to see it awarded to a researcher in the social sciences, and I hope other social scientists will be honored with it in the future,” said Dew.

For Dew, the social sciences are a critical component of the Navy’s future success, especially as it attempts to incorporate new technologies throughout the fleet. He points to the Navy’s progress in energy innovation as illustrative of the process.

“One of the reoccurring issues that comes up when discussing energy innovation is that the technology is already there. The problem is getting people to adopt it. That’s a social science problem. Social scientists are important to the Navy as it attempts to move forward,” Dew Explained.

Dew has been at NPS for 12 years and has advised some 70 thesis students.

“We have one of the most outstanding student bases. I don't know if people realize just how outstanding they are. At an average age of 33, many of them have commanded organizations and have been on multiple deployments. They are so much more interesting to teach than students anywhere else. That’s why I love working at NPS,” said Dew.

The Menneken awards were established in the memory of Distinguished Professor Carl E. Menneken who served as NPS Dean of Research from 1962-1972. Funding for the awards is provided from a bequest to the NPS Foundation by his wife Jesse W. Menneken.