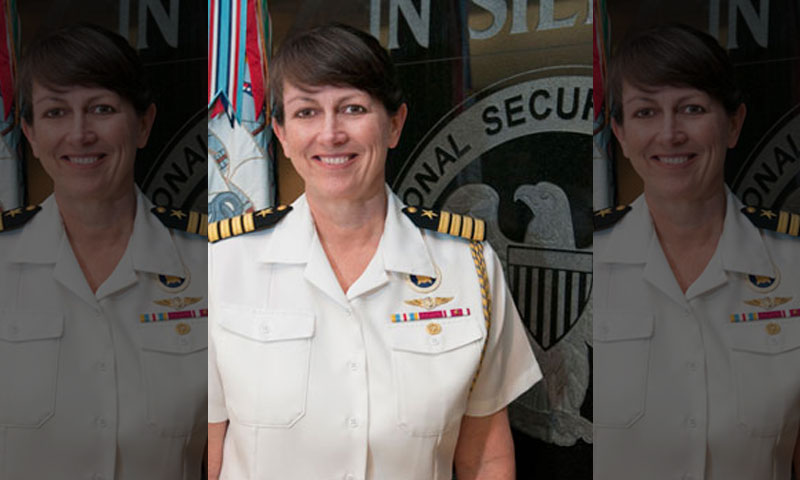 Secretary of Defense, Robert M. Gates announced the nomination of Navy Captain Jan E. Tighe to the rank of Rear Admiral (lower half). Her current promotion will make her the first Female IW Rear Admiral as well as the first Ph.D. IW Rear Admiral, an achievement that comes as no surprise to those who know her.

The Naval Postgraduate School has a reputation for educating and supporting some of our military’s best leaders in the most pressing areas of national security today. In each graduating class, some students stand out with noticeable potential to do great things with their education and leadership abilities as they rise above and beyond the already exceptional standards that NPS sets.  One such student was recognized on March 26, when the Secretary of Defense, Robert M. Gates announced the nomination of Navy Captain Jan E. Tighe to the rank of Rear Admiral (lower half). Her current promotion will make her the first Female IW Rear Admiral as well as the first Ph.D. IW Rear Admiral, an achievement that comes as no surprise to those who know her.

“I realize that the fact that I’m the first woman selected to Flag Rank as an IW officer is significant to those coming up in the ranks and I am grateful to have the opportunity to represent all that is possible in our great Navy,” Tighe said. “Our community’s core skills have never been more in demand by the Navy and the nation than they are today. That makes for both increased opportunities and responsibilities for the IW community and the larger Information Dominance Corps. I’m excited to be part of it.”

Tighe graduated from the Naval Postgraduate School in 2001 after receiving both her Master’s degree in Applied Mathematics and her Ph.D. in Electrical Engineering. She also studied Russian at the Defense Language Institute. Her time spent studying as an Information Warfare (IW) officer on the Monterey Peninsula prepared her for the challenges she would face in the field.

Her dedication to the Navy and to Information Warfare have paid off during her time in the service, earning her the Defense Superior Service Medal, Legion of Merit, Meritorious Service Medal, the Strike/ Flight Air Medal, the Navy Commendation Medal, and the Navy Achievement Medal.

“I am honored and humbled by the Navy’s selection of me for Flag Rank. It is a privilege to continue to serve the Navy and the wonderful men and women in the Information Warfare community as part of the larger Information Dominance Corps. Throughout my career I’ve never felt held back as a woman in the Navy. Being able to embark on this next part of the journey reaffirms that assertion,” she noted.

After graduation, she went on to serve as Chief Staff Officer and Chief Engineer for the Naval Information Warfare Activity, but she always held fast to the importance of education for Naval officers. NPS Professor Jeffrey Knorr recalls Tighe’s endless commitment to helping her fellow officers, even after she had left NPS.

“She’s obviously a very smart and capable lady. After she left here, she promoted the education of officers in her community,” said Knorr, who served as Chairman of the Department of Electrical and Computer Engineering during the time that Tighe attended NPS. “She actually set up a program where officers came here from Naval security sites around the world, 25 at a time. Each quarter we had a series of short courses that we designed specifically for them. The program continued for a number of years. ”

Information Warfare has a growing demand as cyber security and counter terrorism experts face new challenges with evolving technologies. The Chief of Naval Operations has placed an increasing focus on the field of Information Dominance with the recent N2/N6 merger, keeping the Navy positioned to respond to threats.

Tighe says that respect for the value of education carries on, and she continues to grow and learn as she interacts with leaders from the intelligence community, the Department of Defense, Congress, the White House, and other government agencies on how to best protect our nation.

“The notion of lifelong learning is not an option for me, it’s in my DNA. I loved every minute of my time at NPS, whether in the classroom or doing research. Clearly, for the Information Warfare community, the electrical engineering program is one of several curricula at NPS that is foundational to the technical aspect of our mission. I have been able to apply that knowledge gained at NPS to every subsequent job.”

Having come from a family of educators, she knows the importance of learning from both an institution, and from the experience of those around her. Tighe currently serves as executive assistant to Lieutenant General Keith B. Alexander, current Director of the National Security Agency, Chief Central Security Service, and Commander, Joint Functional Component Commander-Network Warfare.

“More important than what Lt. Gen. Alexander does each day is being able to watch how he does it. While he is an incredibly gifted technical leader, he is also a thoughtful and dedicated leader who is devoted to his people and his family at the same time. Balancing mission accomplishments with the needs to build, train, retrain and reward the workforce is something he does very well. I hope that I can come close to living up to the standard of great leadership that he has set.”