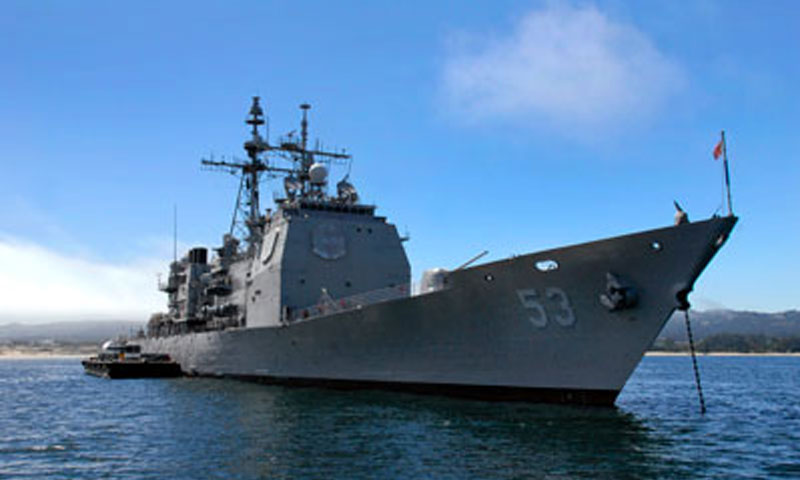 On July 17, the guided missile cruiser USS Mobile Bay made a rare stop in the Monterey Bay to give Science, Mathematics and Research for Transformation (SMART) Scholarship recipients a chance to see first-hand the kinds of equipment being developed in DoD labs.

It takes a lot of qualified men and women to operate the San Diego-based guided missile cruiser USS Mobile Bay (CG-53). The crew of 320 take their responsibilities seriously aboard what could be the most technologically advanced cruiser in the world. Recently upgraded with a cutting-edge computer system and more advanced missile capabilities, the Mobile Bay made a rare visit to the Monterey Bay – a place one of its senior crew members, Executive Officer Cmdr. Joey Frantzen, knew very well – to greet the 297 recipients of the Science, Mathematics and Research for Transformation (SMART) Scholarship for Service award.

Originally commissioned in 1987, the Mobile Bay is a Ticonderoga class cruiser developed with extensive capabilities for anti-air warfare, surface warfare and strike warfare. On April 19, the Mobile Bay completed a ten-month upgrade process, making it the second ship in the Navy to undergo such extensive upgrades. Most of the renovations, noted Frantzen, can’t be seen from the outside, but involve the internal computers and combat systems.

“There are a couple of new radars and guns. But the primary thing that they have upgraded is the computer system that we call the Aegis Combat System,” explained Frantzen, which coincidentally was pioneered in the 1970s by NPS Hall of Fame member, the late Rear Adm. Wayne E. Meyer. “Originally we had computers that would do, say, a million instructions per second. And now, we have computers that are 1.8 GHz and can do 1.8 billion instructions per second. It is a much faster processing speed. The engineers are always putting upgrades in to make the algorithms and fighting power better.”

Frantzen is fully aware of the importance of computer capabilities to operational success, having received his Masters degree in computer science from NPS in 2001.The Mobile Bay is the second ship that Frantzen has served aboard as an Executive Officer, and he is slated to be promoted to Commanding Officer of the USS Ingraham (FFG 61) in 2012. Even in his short time aboard the Mobile Bay since it completed renovations in April, he has seen first-hand how education can translate to the real world application of capabilities such as the Aegis system within the fleet. 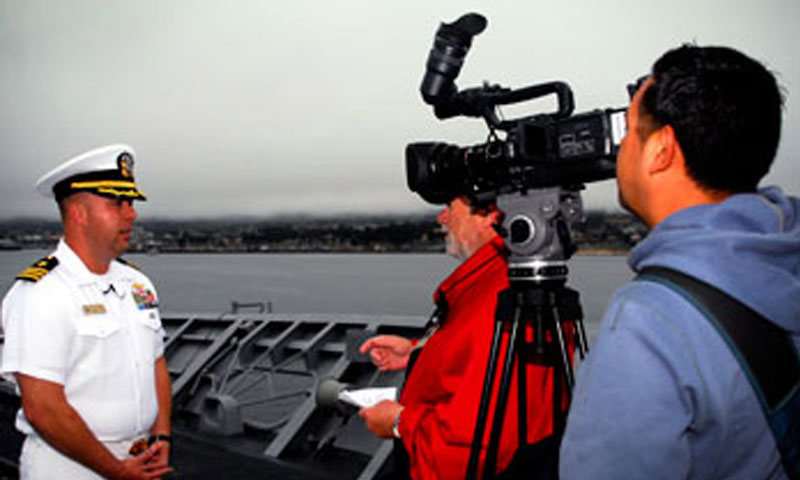 Cmdr. Joey Frantzen, Executive Officer aboard the USS Mobile Bay, explains the features of the ship for a segment of NPS Pentagon Channel program, Inside NPS.

“Over time, we start to see computers becoming more and more part of our lives,” explained Frantzen. “Not just for civilians, but also in the Navy. I think that having a background in computer science specifically has helped me when we have different issues come up, not only in using the equipment, but in understanding how it works. So if something breaks, and I have a young technician come up and talk to me about the Local Area Network and what’s happening with it, I can relate and understand in a way that someone without a background in computer science might not. That has been a great advantage.”

Because of the criticality of having systems that can be operated by a diverse crew with different backgrounds and expertise, it is important that Department of Defense (DoD) scientists and engineers have a chance to see the applications of the technology they will help develop. SMART, a DoD program, allows students not only the internships and scholarships to study science and mathematics at the college and graduate levels, but it also provides them opportunities such as the Mobile Bay visit to see the kinds of systems being developed for the Navy.

“I think the SMART program is a great program to bring fresh new ideas into the workforce. They are the future,” said Capt. Jim Housinger, Mobile Bay Commanding Officer. “We have to have an incoming stream of new younger people to replace the people who have been doing those sorts of jobs for a long time. I think with the ship being here, it gives them a chance to see the end product of the kind of work that they will be doing once they emerge from the SMART program. I think an investment in education and development of people’s minds is a strategic imperative for our nation. We have to invest in that upfront so that we can meet challenges in the future.” 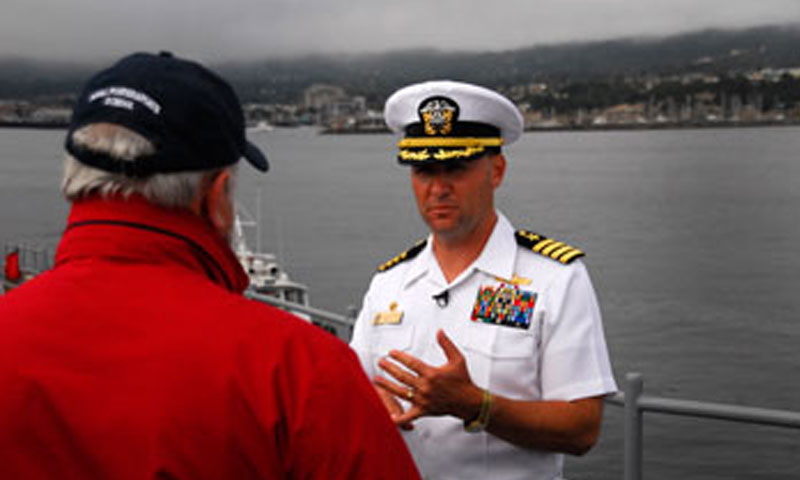 Capt. Jim Housinger of the USS Mobile Bay explains the features and responsibilities of the ship during a rare port visit to the Monterey Bay. The Ticonderoga class cruiser features the Aegis Combat System, originally pioneered by NPS Hall of Fame member retired Rear Adm. Wayne Meyer, and is the second in the fleet to receive extensive upgrades.

In order to meet those challenges should they arise, the Mobile Bay crew regularly practice Naval Surface Fire Support Exercises, shooting scenarios and weapons testing. The crew, like a small community, labor together to make the Mobile Bay an exemplary member of the fleet, and a prominent anti-aircraft warfare force for the Navy.

“We have an absolutely tremendous crew. Maybe I’m a little bit bias because I am the commanding officer,” said Housinger. “But I am extremely proud of this group. It’s a very diverse crew, and I think that’s one of the things that make us great. Using the diversity of backgrounds, and where people came from to expand our ability to think and innovate and inform. It’s pretty exciting to have that kind of workforce that’s so dedicated, that’s so good at what they do. We’re a global navy and we have been a global navy and we will remain a global navy. By networking our ships and aircrafts together even tighter and better, we are more capable of defeating an enemy, recognizing threats and situations and being able to fight and win our nation’s wars.”