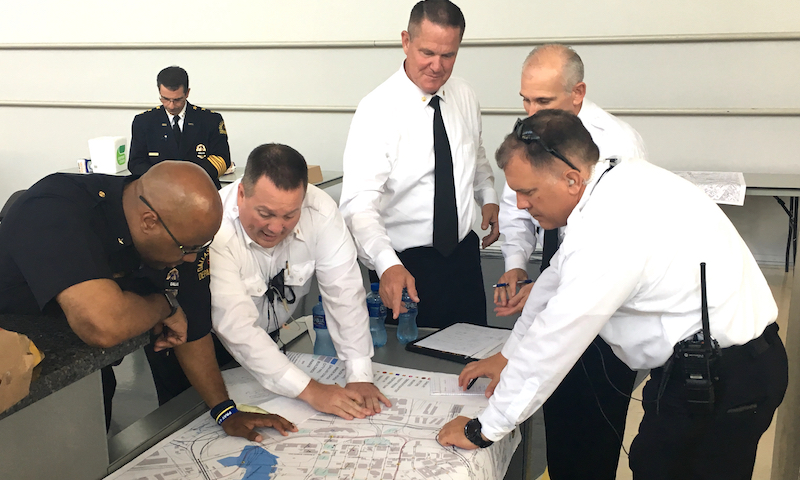 Dallas Police Department Maj. Stephen “Max” Geron, right, joins fellow command staff officers in planning his department’s response to an anti-police brutality protest in July 2016, hours after the funeral for a Dallas police officer killed by a sniper on July 7, 2016. Geron’s thesis on police response to mass protest through NPS’ Center for Homeland Defense and Security, is garnering national attention for its innovative analyses on this complex topic.

Geron has been in high demand since, traveling around the country speaking to police departments and others about his research.

“From my analysis, I am able to provide strategic recommendations for city and police leaders in dealing with protests in the 21st century by utilizing a sense-making framework that will assist leaders in developing strategies to address protests in both large and small cities,” said Geron.

Geron became interested in this line of research after analyzing the events that led to the pepper spraying of non-violent demonstrators at the University of California, Davis. He ultimately aimed to compare police responses to protests around the country, but found it difficult to compare “apples to apples” due to the varying size of protest groups, police departments, and cities where protests took place. The ‘Occupy’ movement, however, presented Geron with a rare opportunity.

“When the Occupy movement of 2011 came about, it provided a unique opportunity to look at a nation-wide demonstration and how it was handled by various sized police departments at the same, or nearly the same, time.

“I looked at New York because it was the first, and the most notable of the media-covered protests. I also looked at Portland, which happened to have the largest Occupy contingent,” Geron explained. “Then I looked at my home city of Dallas, where I had access to documents that would allow me to gauge how we responded to our own Occupy demonstration. To round it out, I looked at Oakland, which had one of the most contentious Occupy movements.”

Geron analyzed his select cities’ responses to the Occupy movement through the lens of a series of what he called “issues” – factors that, in varying degrees, each city had in common. Some of these issues include, among other things, the use of negotiated management; the presence or absence of cohesive governance; the degradation of protest camp conditions; control of public spaces; the militarization of police and tactics; the utilization of social media; mutual aid agreements with other public service organizations; and, various strategies for dealing with prolonged demonstrations.

Negotiated management, the first of the issues explored by Geron, is a strategy for protest response born in the 60s and the various civil rights protests and demonstrations that characterized that era. Geron explained how it works.

“If you are going to hold a protest, I come to you and say, ‘I understand that you want to hold a demonstration. What are you hoping to accomplish, what are your goals, what are your plans for this demonstration, and how can we help to make that happen?’” Geron explained. “Some people want to have a sit-in and get arrested. If that’s the plan, we can assist without either protestors or police officers getting hurt.”

Geron notes that the policing community relied heavily on the negotiated management process until the 1999 so-called “Battle in Seattle,” where protestors from diverse groups converged onto downtown Seattle to protest a meeting of the World Trade Organization. It would prove to be a protest employing tactics that the Seattle Police Department was unprepared to address.

“[They] did not count on the use of ‘black bloc’ tactics by people intermingled with regular protestors,” explained Geron. “Those tactics are designed to defeat police controls like refusing to follow directions, setting wheeled dumpsters on fire, and picking up police barricades,” said Geron.

The failure to anticipate black bloc tactics led to what many observers deemed excessive use of force against protestors by the Seattle Police Department.

“They used an inordinate amount of chemical munitions and tear gas in the first 72 hours because they were unprepared to deal with the volume and tactics of the protestors,” said Geron.

“They started going toward a strategic incapacitation strategy … which, included doing more intelligence work,” Geron explained. Within this strategy, law enforcement looked closely at the leadership of a potentially contentious protest group.

“Does this guy have any warrants for his arrest? Is he wanted for something? What else is he doing wrong? [If they find something], they can strategically remove him, say a day before his demonstration or the day of it,” Geron explained.

Strategic incapacitation is part of a comprehensive strategy designed to help police departments enforce government control of public spaces and, when necessary, restrict access to public property, which was another of the issues that Geron explored in his analysis.

“In Dallas, the city refused to put up Porta Potties or collect [protestors] garbage unless it was placed in a particular receptacle,” said Geron. “They also restricted access to the restrooms in city hall to individuals other than those involved in the protests, which raised legal issues.”

Another area identified by Geron as a contributor to either the success or failure of police responses to long-term public protests was governance. Good governance he notes, is critical to an effective police response.

“If you look at Oakland for example, they lost their police chief in the middle of the protest and had an interim chief step in. They also had a mayor that wanted to allow the demonstrations and a city council, that in some instances, actually participated in them,” Geron explained. “They evicted the demonstrators only to allow them to come back, and then evicted them a second time.”

But perhaps the most controversial of the issues explored by Geron in his thesis was the militarization of police forces and the use of military tactics by law enforcement, ranging from the employment of snipers to the deployment of tactical combat vehicles.

“Oakland police began to come across in a very heavy-handed manner. During some of the very first demonstrations, they put riot gear on and took a very hard line stance in both their dress and their actions,” said Geron.

In noting the effects of presenting a military posture to protestors engaged in acts of civil disobedience, Geron points to the work of psychologist Phillip Zimbardo and his famed Stanford Prison experiment, which Geron believes sheds light into the actions of both police and protestors.

“[Zimbardo] created a situation where normal, everyday college students were placed in a position of authority over other people,”Geron explained. “Then he watched as the situations in which the students were placed, contributed to the degradation of their actions, their morals, and their ability to mistreat other human beings … It’s really not a case of bad apples. It's a case of bad barrels that people allow to exist.

“When you take Zimbardo’s argument and look at what Oakland did, and then evaluate it by looking at the concept of deindividuation, things start to make sense. If I put you in riot gear, and I put you on a line with a hundred other officers dressed exactly like you, you all look alike and you begin to, in many ways, all act alike. You lose some of your individual characteristics and you begin acting like a group – much like the military does. If you do that, you have to expect human behavior to change,” said Geron.

Geron’s work continues to garner attention in light of ongoing protests around the nation. Ultimately, he hopes that his work will eventually lead to greater cooperation, and both effective and humane responses to acts of civil disobedience. In the end, he says, protecting the rights of protestors to be heard, while ensuring the safety of the men and women tasked with responding to them, is paramount.