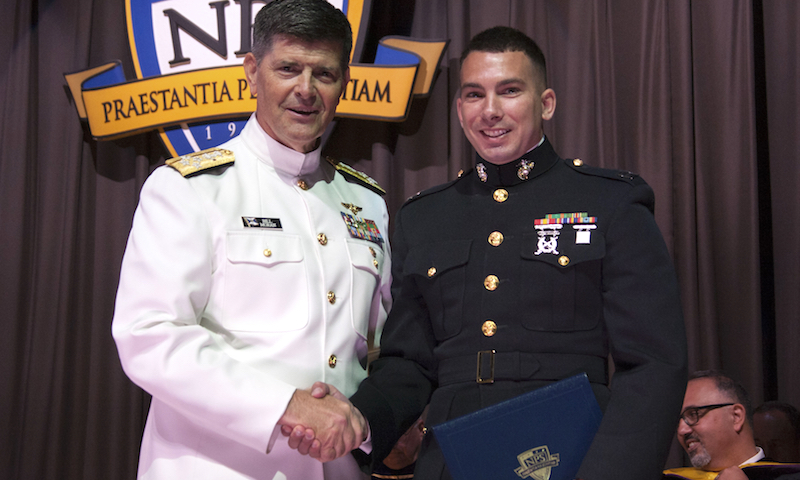 What makes the award even more notable, however, is the impression D’Orsaneo’s research left on Dr. Vinton Cerf, Chief Internet Evangelist at Google, and co-inventor of the protocol that makes the Internet possible, a feat which has earned Cerf the title of ‘Father of the Internet.’

“What was stunning for me is that Cerf took the time to review D’Orsaneo’s entire thesis, not just the abstract, and with that diligence, provided the young captain with words of encouragement that he was indeed on the right track for continuing research in detecting cyber attacks in a software-defined network,” said Larry Reeves, AFCEA Monterey Bay Chapter President.

An excerpt from the congratulatory letter, signed by Cerf on Google letterhead, reads as follows:

“I am most impressed by your innovative use of wavelet-based anomaly detection in Software Defined Networks (SDNs). This architecture is the next step in the evolution of the implementation of the Internet that Robert Kahn and I initiated and have worked on for so many years,” wrote Cerf. “Your thesis work contributes greatly to that objective and I hope your future work and career will reflect the values that Jack Wozencraft held dear and inspired in others. Congratulations on an honor well earned.”

D’Orsaneo was astounded with the news of his winning the award, with the noted recognition an added surprise.

“It was quite an honor and surprise when I received an e-mail from Dr. Cerf. He is the co-founder and pioneer of the TCP/IP, the layered architecture used to interconnect network devices on the Internet ... I can’t tell you how much that means to me,” noted D’Orsaneo.

A native of Elverson, Pa., D’Orsaneo will be reporting to the Marine Corps Systems Command in Quantico, Virginia. “I’ll be working in the program office for command and communications systems assisting with the acquisition of Marine Corps communications equipment,” he said.

The award’s namesake, Dr. Jack Wozencraft, served as NPS Dean of Research from 1972-74. Wozencraft is a Distinguished Professor of Electrical and Computer Engineering and co-authored the well-known textbook, “Principles of Communications Engineering,” which was first published in 1963 and continues to be in print and is used worldwide.