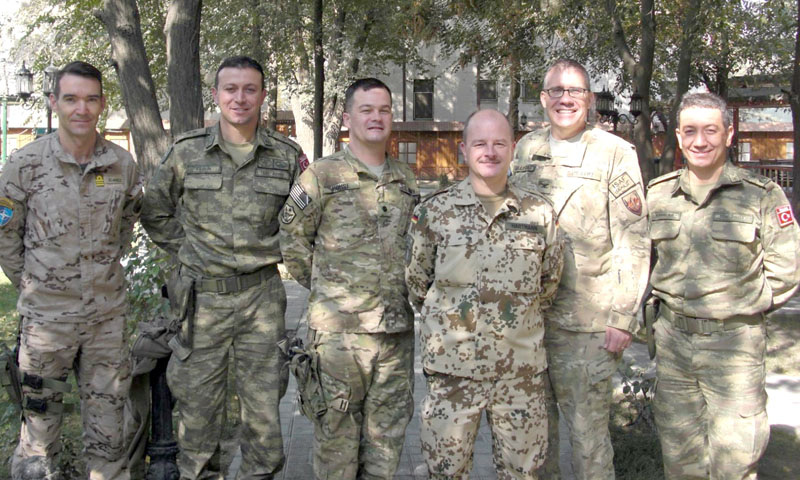 For men and women serving their country overseas, building a sense of community with fellow service members can be incredibly valuable. As a group of Naval Postgraduate School alumni found at the North Atlantic Treaty Organization’s (NATO) International Security Assistance Force (ISAF) Headquarters in Kabul, Afghanistan, those invaluable bonds can also be quickly fostered by a common alma mater.

More than a handful of NPS alumni, at any given time, work side-by-side at ISAF in support of the NATO program’s mission to reduce the capability and will of the insurgency, support growth and development of the Afghan National Security Forces (ANSF), and facilitate improvements in Afghan governance and socio-economic development.

Graduates from the NPS Department of Operations Research (OR) leave the master’s program with not only a defense-based OR education, but also the invaluable experience of studying alongside military officers from around the world. This global perspective meets real-world application for NPS alumni at ISAF, in the Afghan Assessment Group (AAG).

“The work of the AAG is a key element in the plan-execute-assess feedback loop that is at the center of ISAF's operations,” explained Bradford. “We help determine if ISAF actions are achieving desired outcomes, and provide feedback to assist with planning. Our quantitative assessments provide concrete evidence to support commander's assessments of the state of security in Afghanistan.

“The assessment process reviews how well ISAF is achieving the tasks that have been given to it by its higher headquarters and how well we are executing the ISAF plan. Outputs include changes to the plan and reports to higher headquarters,” explained Bradford. “The AAG produces a series of reports for COMISAF [Commander, ISAF] that go to both the NATO and U.S. chains of command on the state of the mission in Afghanistan. We also conduct quantitative analyses of trends in Afghanistan.”

U.S. Army Lt. Col. Jeffrey House serves as deputy director for the AAG. House and his colleagues share a foundation of operations research that goes beyond a common understanding of the principles and practice, especially when those colleagues are from diverse nations across the globe.

“When I arrived in Kabul, I was the fourth graduate of the NPS operations research program to join the Afghan Assessment Group. We all attended NPS at different times, had different thesis advisors, and specialized in different areas. Yet working through differences in language, service cultures, and national cultures never cost us one second on the job because we all shared a common frame of reference,” said House. “We knew that everyone had a strong background in operations research, and this naturally increased the trust and confidence in each other’s work.”

The ISAF was established to help Afghan security forces improve capabilities to ensure long-term stability and governance for the Islamic Republic of Afghanistan. Part of ensuring that stability requires maintained security operations alongside the ASNF, providing mentoring and training.

The AAG is involved in reviewing and planning the ISAF operations to ensure the desired objectives are met, and providing assessments on the state of security in the country to the ISAF commander. For these tasks, and many across ISAF, a solid academic background in operations research, combined with experience applying these methods to military problems, are invaluable.

The officers assigned to ISAF apply their collective OR backgrounds in different ways, but all with a shared goal of supporting the NATO ISAF efforts. Spanish Navy Lt. Cmdr. Pablo Alvarez, a 2007 NPS OR graduate, served as an operational analyst for the AAG.

“My duties down there varied from simple data analysis and descriptive statistics on different metrics we used for campaign assessment, to more deep-dive projects on geospatial and trend analysis on different subjects and areas countrywide,” he said.

“Essentially, we provided to COMISAF campaign assessment, weekly trend analysis and special topic research papers on key issues that hopefully helped the commander keep the campaign on track,” Alvarez added. “Both the branch chief and the deputy were also NPS graduates.”

Alvarez has since completed his tour at ISAF, but recalled the comfort of knowing that the team of officers from around the world spoke the same OR “language.” 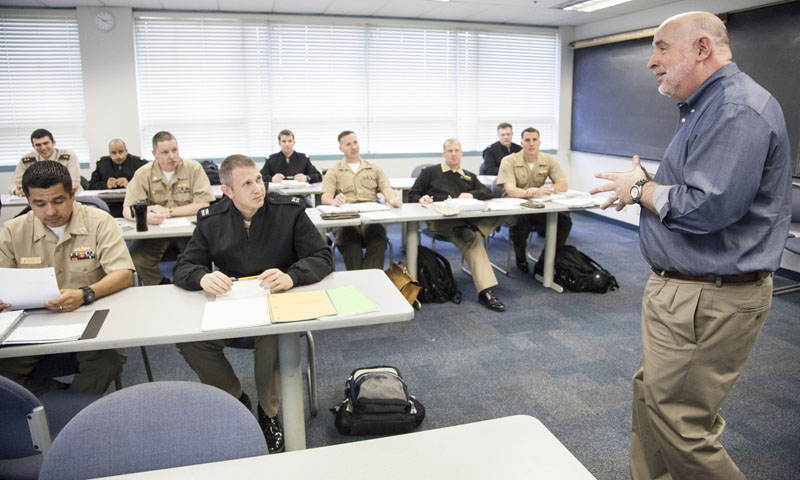 Naval Postgraduate School Department of Operations Research (OR) Professor Thomas Lucas reviews a recent exam with OR and mathematics students during his advanced statistics class, March 19. Hughes has been a member of the NPS faculty since 1998, following six years with the RAND Corporation in addition to a several years with Hughes Aircraft Co.

“Even though we came from totally different environments, sharing a common OR background helped a lot in understanding each other’s capabilities and weaknesses – being able to speak the same language with respect to scientific approaches to problems, analysis and the way we wanted things done,” he noted. “I think we all were proud of being NPS graduates and were also well respected for that.”

NPS’ alumni expertise has also been lent to ISAF outside of the AAG. Turkish Army Maj. Hakan Kabalar served as the CJ5 Policy Development Officer for Campaign Strategy. His day-to-day responsibilities with the Plans Department contributed to long-term planning for stability and development.

“Almost all effort here needs a sound planning architecture – execution of planning, predicting and assessing the impacts of what you are doing, or have done,” said Kabalar. “I can say that this environment is a very unique laboratory to assess the outcome of your efforts.”

Beyond the immediate impact of the OR analyses and long-term planning, the NPS alumni group has seen the value of a global perspective. Several of the officers noted that after studying OR alongside officers from around the world, the transition to the ISAF environment – a joint effort of roughly 50 nations – was a welcomed opportunity to connect with international partners in an operational setting. House found that the tie to NPS helped build a sense of community within a community.

“These international connections weren't just theoretical, as in ‘the U.S., Turkey, and Spain are all NATO allies.’ These connections were personal,” explained House. “For the NPS alumni that I had not met previously, we shared a common experience. From talking about the beauty of Monterey to reminiscing about favorite professors, we had a common frame of reference that made it easy to establish working relationships. In some ways it was easier for me to relate to a Spanish Naval officer than some fellow U.S. Army officers with different backgrounds than mine – and I've never been to Spain, or at sea on a naval vessel!

“For those who have never worked in a multinational setting, it's hard to explain how challenging it can be sometimes. I found it beneficial to have an international set of NPS alumni as a ready-made team inside the staff,” he continued. “I'm very grateful that NPS continues to seed the staffs of our allied militaries with alumni that can come together in circumstances like this to solve problems of mutual interest to all our nations.”

The need for highly-trained military decision makers was evident during World War II, when the efficient deployment of manpower and resources was critical. Since that time, NPS mission has been to support the defense community through a unique, diverse portfolio of master’s and doctoral educational programs. The university’s flagship OR program prepares students to apply operations research principles at the strategic, operational and tactical levels.

“The Naval Postgraduate School began offering its degree program in operations research in 1951, making it the first OR degree program in the United States,” explained NPS Department of Operations Research Chairman Rob Dell in a brief on the department’s history. “We now have over 4,300 alumni from all U.S. military services as well as those of 56 other countries.

“Our students learn not only the theory of operations research, but they put that theory into practice, both in their studies here at NPS and, most importantly, in the jobs they assume once they graduate,” Dell continued. “OR is practiced by our graduates throughout the Department of Defense, from the battlefields of Afghanistan, to the major logistics and operational centers both here and abroad, to operational units across the globe.”

“It does not surprise me to see Lt. Col. Hartmann and our other graduates making such valuable contributions in Afghanistan, Iraq, and elsewhere around the world. I strongly believe there is no other OR department in the world that better prepares its students to solve messy, real-world defense and security problems,” said Lucas. “This is primarily because, at the Naval Postgraduate School, our officer-students do not just learn operations research, they do operations research.

“Throughout the curriculum, NPS OR students work on poorly defined, quick-turn, defense-related team projects with their fellow officers from around the world. Moreover, most of our students work real problems supporting U.S. and allied defense and security agencies as part of their required masters’ theses.”

While this group of NPS operations research alumni at ISAF will, in time, move on to other commands, there is no doubt their skills will be applied to whatever their respective national security strategies require. And equally assured is that NPS will have more graduates at the ready to fill their shoes, at ISAF, or wherever they are needed around the world.