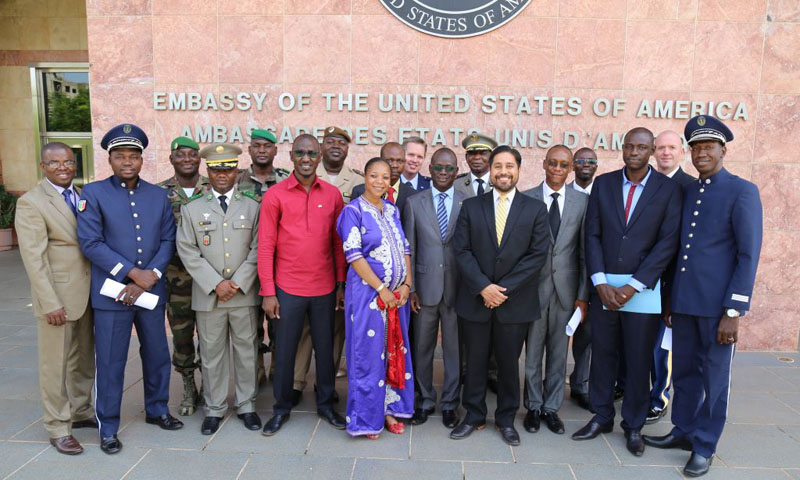 Members of the first contingent of graduate students from the Republic of Mali are pictured outside the U.S. Embassy in Bamako, Mali, Aug. 4. The inter-ministerial group will attend NPS next year after completing language training in San Antonio, Texas.

The Naval Postgraduate School (NPS) is slated to welcome a cohort of graduate students from the Republic of Mali in March of 2017. The group of 13 students from various ministries will report to NPS next year after completing language training in San Antonio, Texas.

Ambassador Paul A. Folmsbee with the U.S. Embassy in Bamako, Mali discussed the U.S. commitment to assisting with the training of Malian security and defense forces in a recent press release. He noted that the creation of Crisis Response Teams and National Security Fellowship programs, like the one that will bring Malian officials to NPS, demonstrates a “solid and long-term commitment between our two peoples to improving the governance of the security sector.”

The Malian students will be traveling to NPS from Mali’s newly-established Inter-Ministerial Security Coordination Office – part of an effort to bring together Mali’s various ministries in order to focus on national security and interagency cooperation. But in order to turn that vision into an operational reality, the Malian government recognized a need for advanced education for its ministers – that is where NPS entered the picture.

“The government of Mali voiced throughout the process of creating the inter-ministerial coordination office that it suffered from a lack of human capital – particularly with regard to executive management staff,” explained Army Maj. Nick Gregoire, a Foreign Area Officer at the U.S. Embassy in Mali.

According to NPS Senior lecturer Carolyn Halladay with the university’s Department of National Security Affairs, the Republic of Mali identified a need for both strategic studies and greater interagency cooperation. They began to search for a place where they could send upcoming ministry officials. After exploring their options, they decided upon NPS.

“The emphasis of their plans for NPS has shifted from the operational concern of terrorism to the larger concern of making the whole of government to work together,” said Halladay. “It is going to be a tremendous challenge, but it will be fantastic.”

For Gregoire, turning to NPS to meet that challenge was an easy choice.

“Having done business with NPS in the past, the country team was aware of NPS’ diverse catalogue, vast network of academic, practical and vocational resources as well as highly adaptive staff,” said Gregoire. “Very early in the discussions, the embassy began simultaneously negotiating with both the government of Mali and NPS, knowing that what our national security staff partners require will be available at NPS.”

“The idea was to get the right group of Malians to NPS where they could receive not only substantive knowledge, but also an opportunity to bust down the barriers between them,” added Halladay.

At NPS, the Malian cohort will benefit from the university’s interdisciplinary faculty and from funding through the Security Governance Initiative, which was created by the Obama administration in 2014 to focus on security issues in North Africa.

“It's a fantastic opportunity. This Mali initiative may be the first on this scale under the Security Governance Initiative,” said Halladay. “It is a happy, harmonic convergence of everything that is good about NPS, international and innovative.”

NPS International Graduate Program Office Director Alan Scott explained how graduate education can be used by programs like the Security Governance Initiative to enhance the national security of partnered and allied nations.

“The hope is that [the Malian contingent] will conduct thesis work at NPS that will roll directly into an implementable Malian strategic plan,” said Scott.

If succesful, Halladay and Scott hope that the curriculum being developed at NPS will serve as a model for other nations seeing to partner with the U.S. But first, they will have to find the right mix of faculty and subject matter expertise to make the venture succesful.

“We are innovating to accommodate the special needs of this group with an eye toward how we can help other nations using this model,” said Halladay. “Will be molding our curriculum into an 18-month program incorporating an extra quarter where we will build in some instruction from other school houses on campus.”

“NPS was very forward leaning in tailoring its curriculum and academic focus for this current, real-world requirement,” added Gregoire. “We doubt there is another academic institution that would have both recognized the potential of this unique fellowship, and could seize the opportunity, with such flexibility and personalized support.”