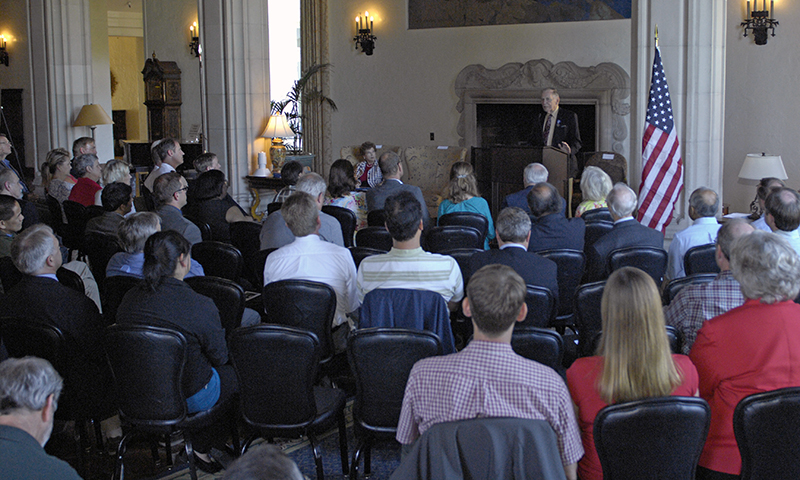 Distinguished Professor Dr. Herschel “Hersch” Loomis Jr. was honored at his retirement ceremony by being awarded the Superior Civilian Service Award by NPS President retired Vice Adm. Ronald A. Route for his service to NPS from August 1981 to June 2017. During his ceremony, many NPS faculty members recanted their personal experiences with Hersch, describing how he has made a significant impact in their lives; his impact to both the Electrical and Computer Engineering (ECE) and Space Systems Academic Group (SSAG) departments; and his dedication to the national security of the nation.

“We are all here to honor Hersch, but not to tell him goodbye. He will continue to volunteer here at NPS, the reason being is so he doesn’t have to clean out his office,” joked Dr. Clark Robertson, Chair of the ECE Department.

Prior to coming to NPS in 1981, Loomis served in the Navy as an electrical engineer, became a registered Electrical Engineer in 1966, earned his Ph.D. at MIT in 1963, and was a professor and briefly the Chairman of ECE Department at the University of California-Davis. At NPS he has been an assistant professor, an associate professor, chairman of the Department of ECE, and acting dean of the research.

“All I really wanted was a flag,” said Loomis. “I thank you all, especially those who came from so far away. When I came to NPS, as we have now heard several times ‘36 years ago,’ I wanted to try something different and do a few more of the fun things in terms of research. I did indeed find that my research was more fun here. I also found I didn’t have to teach teenage students anymore. Instead, I found some much more mature students, which was a pleasure.”

“I wanted to mention a few important people and thank them in particular. The first one is Shirley, we just celebrated our 60th wedding anniversary … talk about dedication.”

Loomis continued to thank the many students he has met over the years and the people he has worked within ECE and SSAG.

“People that I have worked with closely, specifically the ECE and SSAG, embody comradery, professionalism, which I have made a large number of friends,” continued Loomis. “Thank you for all of these years together.”

Route noted many of Loomis’s accomplishments, and how they have shaped NPS and the many students and faculty members that have had the privilege to work with him.

“Loomis distinguished himself in all facets of research that supported military reconnaissance, signals intelligence, emitter geolocation, Maritime Domain Awareness, and space-based computing,” said Route. “His encouragement and mentorship led his faculty colleagues to become more involved in classified reconnaissance research. Dr. Loomis contributed to the institution by developing courses that were vital to the development of the Electrical and Computer Engineering and Space Systems curricula.”

Route continued to describe how in recognition of his service to NPS, he earned the title of Distinguished Professor.

During the ceremony, Capt. Eric Hendrickson, Commanding Officer for Space and Naval Warfare Systems Command, SPAWAR Space Field Activity (SSFA), presented Hersch with several gifts including a model of the satellite his research helped create, a Louisville baseball bat, and a flag that was flown over the National Reconnaissance Office (NRO), The National Security Agency, and Naval Postgraduate School.

“I am here on behalf of a large group of people who couldn’t make it here today,” said Hendrickson. “Your impact at the NRO has been huge. Typically, the Navy has two major program managers, at the NRO we currently have four, and all four were students of yours. They each said that your teaching had an impact on what they are doing today.”