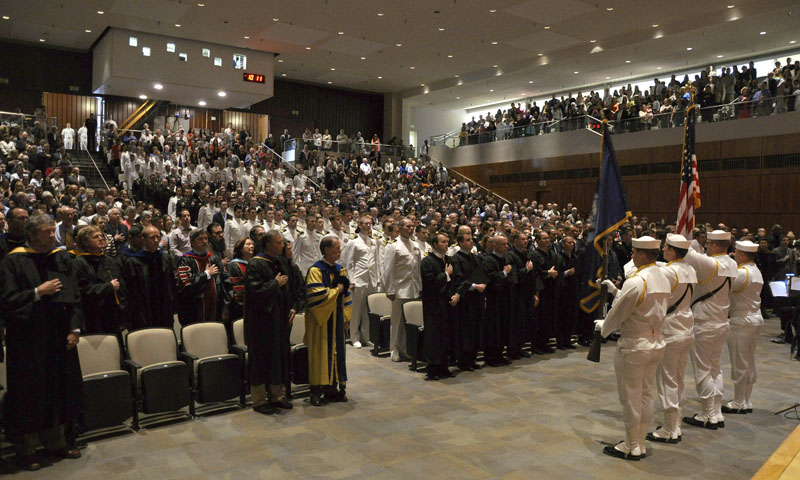 Attendees of NPS' 2014 Spring Quarter Graduation Ceremony stand while the Color Guard parades the colors. NPS honored some 313 graduates earning 318 advanced degrees at the ceremony, including representatives from every branch of the U.S. military as well as Department of Defense civilians and students from 16 partnered and allied nations.

The Naval Postgraduate School (NPS) honored some 313 graduates earning 318 advanced degrees during its Spring Quarter Graduation Ceremony at King Auditorium, June 20.  The graduates included representatives from every branch of the U.S. military as well as Department of Defense civilians and students from 16 partnered and allied nations.

NPS President retired Vice Adm. Ronald A. Route congratulated the graduating class calling the ceremony “a celebration of individual commitment, perseverance and personal accomplishment” and thanked the families, faculty and staff that supported the class through the rigors of graduate education. He also spoke of both his pride in their accomplishments and the role that their NPS education will play in their future assignments.

“Words cannot express our immense pride in you! We have immersed you in an extremely competitive academic environment that has enabled you to focus and think about the challenges that affect your service and our national security,” said Route. “It is our commitment that your NPS education will serve as your foundation upon which the rest or your careers are built.”

Route also took pride in the volunteer work that many of the graduates participated in during their time at NPS. He pointed to the work of NPS students in programs like Motivating Others Through Outreach (MOTO) and Breakfast for Your Brain. He also noted the hours spent by students who volunteered to help build custom homes for wounded warriors and who read to youth at local libraries.

He then turned the podium over to NPS Professor and Department of Defense Analysis Chair Dr. John Arquilla, who served as guest speaker for the ceremony. Arquilla is a prolific author and a much sought after subject matter expert in the areas of irregular warfare and military affairs. He spoke at length to the graduating class about the “big ideas” that come out of NPS and their ability to combat what he described as a “world war” against international terrorist and criminal networks.

“Something has gone awry in the world, a very hard won victory over Al Qaeda in Iraq now hangs by a thread … the Taliban watches as the clock runs down in Afghanistan. The list goes on and on and extends to more than 30 armed conflicts around the world,” said Arquilla.

Quoting the poet Charles Churchill Arquilla described a world where  “half-starved spiders feed on half starved flies,” and asked the graduating class, “Why is the world on fire?”

In response to his question, he suggested that there is a great, challenging battle being fought against dark networks, but he also spoke of the students’ role in combating those organizations.

“Most of us grew up in a cold war world characterized by an arms race to build new weapons. The world we are in today is characterized by a race to create new networks,” said Arquilla. “Networks have been changing the world over the last decade … They are flat, decentralized, with not much of what we would call leadership. They consist of small pieces loosely joined.”

But, he emphasized, “The education that you have received here has provided you with the tools you will need to face those networks.”

Arquilla then pointed to the example of Adm. William McRaven who while at NPS called for the U.S. military to build networks of its own, calling the effort to do so “one of the truly big ideas that have advanced out of the Naval Postgraduate School.”

Finally, Arquilla noted China’s role as a rising world power and Russia’s recent covert and overt military actions around the world. Despite these challenges, he remains optimistic in part because of the work done by the students at the university.

“There is hope, despite all of this, even hope for peace one day,” Arquilla said. “Across campus, our students and faculty are proposing big, game-changing ideas.” He would describe research into, amongst other things, alternative energies to power the fleet, nano-satellite based networks, and swarming technologies with the potential to counter Chinese, Russian and Iranian advances in unmanned technologies.

“What kid of place is NPS?” asked Arquilla. “It's a place where we redefine the possible … Where top tier faculty come together deeply with security professionals from all over the world.