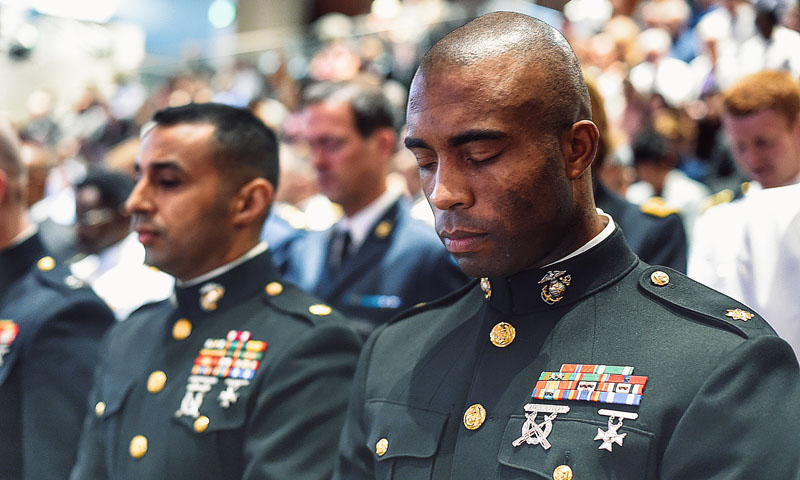 He whole-heartedly recommends NPS to his colleagues in New York, and has sought to capitalize on his experiences here by sharing materials and lessons learned with his fellow police officers back home.

“Being put together with such a diverse group of people from so many different disciplines was excellent,” said Brady. “We challenged each other and drew out the best in one another to become better homeland security professionals.”

“I can’t tell you how inspired I was to watch you all file in this morning … This nation’s greatest treasure is the young men and women that serve,” he said.

Ryan also thanked the families in attendance and noted the important contributions that military spouses make toward their loved ones’ careers. After describing his own wife’s support despite the numerous deployments and other challenges that came with his military service, Ryan noted to applause that, “The proudest thing someone can say about me is, ‘He’s Judy Ryan’s husband.’”

Throughout Ryan’s emotional address to the graduating class, he shared anecdotes from his military career, drawing largely upon the lessons he learned while observing service members overcome incredible odds in the face of personal suffering and enormous tragedy. One of those anecdotes was drawn from observations he made on Sept. 11, 2001 while serving at the Pentagon with NPS President retired Vice Adm. Ronald A. Route.

Ryan recalled making a phone call while standing on the roof of a building near the Pentagon where he saw Flight 77 crash. He shared his memories of the incredible heroism and courage demonstrated by those most affected by the attack that day. One of those service members was a Solider who risked everything to carry a comrade from the burning building. Army Sgt. 1st Class Donald Steven Workman walked into “an inferno” to retrieve now retired 1st Lt. Kevin Schaeffer who had called out “I’m alive” before passing out.

“I was privileged to be in the Hall of Heroes at the Pentagon when Kevin was medically retired and received the Purple Heart, and Sgt. 1st Class Workman received the Soldier’s Medal,” recalled Ryan. “I never realized how much [Workman] had sacrificed until I looked in the first row and saw his wife and family. He risked that for someone he did not know.”

Schaeffer later met with Ryan and spoke about both his ordeal and his desires for the future.

“He looked me in the eye and said, ‘Admiral, when I was struggling and didn't know I was going to make it, I promised to myself that I would do two things if I did make it. I promised that when I woke up, I would say out loud the names of the seven people that didn't make it and pray for them, and I made a promise to myself that I would stay in the arena … I have to find a way to serve. I can’t do it in the military because of my lungs, but I have got to find way to continue to serve,’” Ryan quoted. 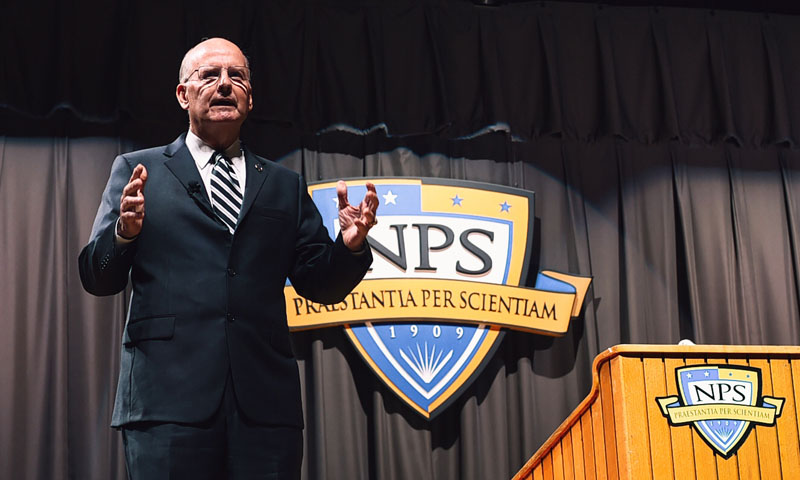 According to Ryan, Rent later told his parents, “I can see by the looks on your faces that you are worried about me, don't be. I am grateful to be alive and I want to have a good life. I have an attitude of gratitude. I am the senior leader from this group to come back and I have to set a good example,” Ryan shared.

“Leadership is not about words, we all know that, leadership is about example. And here is a young man that reminds us of that at a critical time,” he said.

In closing, Ryan called for the assembled students, faculty and staff to do their part to advocate for their fellow service members and their families.

“All of us collectively … have to make sure that the 99 percent of the population that have not served keep their commitments to those that have served and those that will serve in the future,” said Ryan. “Please speak up to your elected officials about the importance of keeping our commitments to the men and women, and their families, that have kept us free for the last 14 years.”

Ryan was recently recognized as one of the 100 most influential and impactful veterans on Capitol Hill. Under his leadership, the MOAA has been named a “Top Lobbyist” by The Hill newspaper for the past eight years.