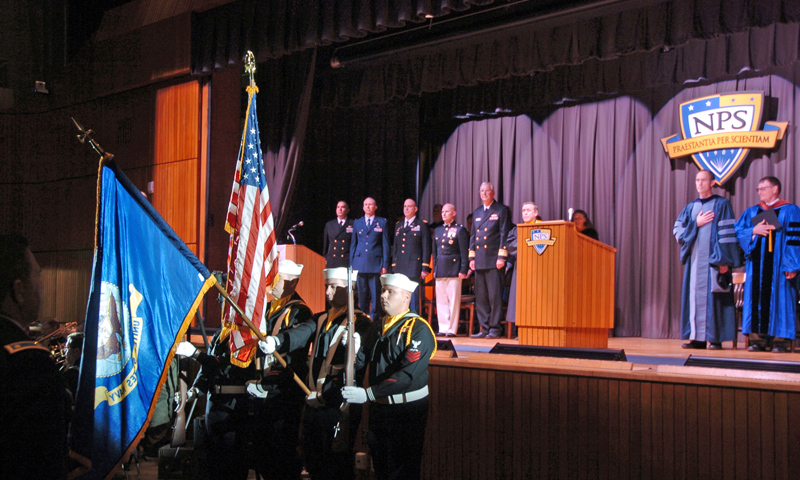 The Naval Postgraduate School (NPS) honored 301 graduates during its Winter Quarter Commencement Ceremony at King Auditorium, March 25. The graduates included representatives from every branch of the U.S. military as well as Department of Defense (DOD) civilians and 17 international students from 10 partnered or allied nations.

“Today is a celebration of individual commitment, perseverance and personal accomplishment,” said NPS President retired Vice. Adm. Ronald A. Route. “We are here today, along with family and friends, to express how proud we are of our students’ academic achievements.”

Route went on to thank the faculty, staff and loved ones that contributed to their students’ successes. He also recognized the NPS Foundation for providing the university with an important “margin of excellence.”

Rear Adm. David H. Lewis, the commander of Space and Naval Warfare Systems Command (SPAWAR) served as guest speaker at the event. At SPAWAR, Lewis leads a global workforce of 9,700 civilians and military personnel who design, deploy and develop some of the Navy’s most advanced communications and information capabilities.

Throughout Lewis’ address to the graduating class, he spoke of the rapid technological changes that have occurred since he graduated from NPS in 1988.

“When I left here in 1988 these are the things that didn't exist: the internet, email, cyber-security, China was an economically backward country, domestic terrorism didn't exist, global warming didn't exist, energy independence didn't exist, Russia was a province in the Soviet Union … Everything has changed professionally since I left this institution. But I use the things that I learned here every day in my job,” said Lewis.

Lewis likened the rapid technological advancements that have occurred over the last three decades to the advent of the steam engine and the later development of the electric motor.

“By moving from steam power to electric power everything changed. [Manufacturing] costs went down by 90 percent and productivity went up by thousands of percent. It took us 100 years to figure that out,” said Lewis. 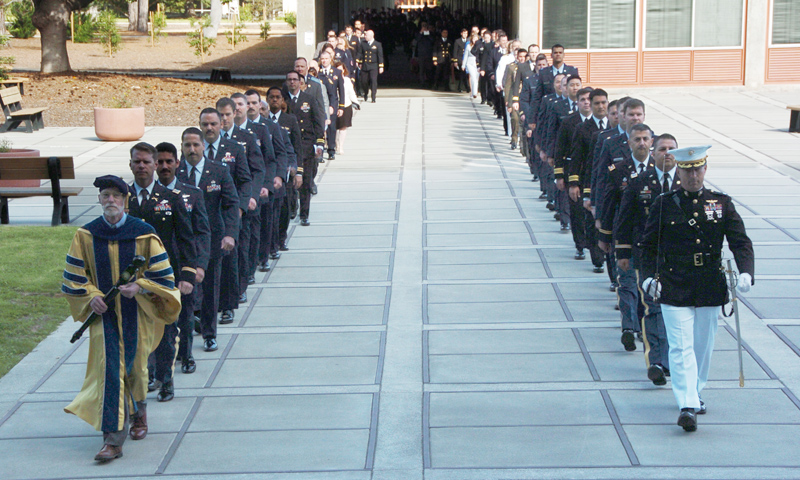 Lewis also spoke about the dramatic changes in international relations, warfare and national security that have taken place over the last century.

Lewis concluded by congratulating the graduating class and challenging them to make the world a better place.

“You have concluded a tremendous amount of hard work. The reward for hard work well done, is more hard work.

“I am looking to you to change your world … Are you the one that is going to revolutionize the way we do business? That’s what your leaders expect of you coming out of this school. They sent you here to make them better … It’s on you to make this world a better place based upon what you have learned here,” challenged Lewis.

Prior to the awarding of diplomas and conferring of degrees, Route thanked Lewis for his remarks and presented him with the university’s prestigious Distinguished Alumni Award, noting his extraordinary leadership, distinguished DOD career, and his contributions to graduate education.

NPS is the nation's premier national security focused university. It has been offering defense focused graduate degrees since 1909 and has been operating continuously in Monterey, Calif., since 1942.