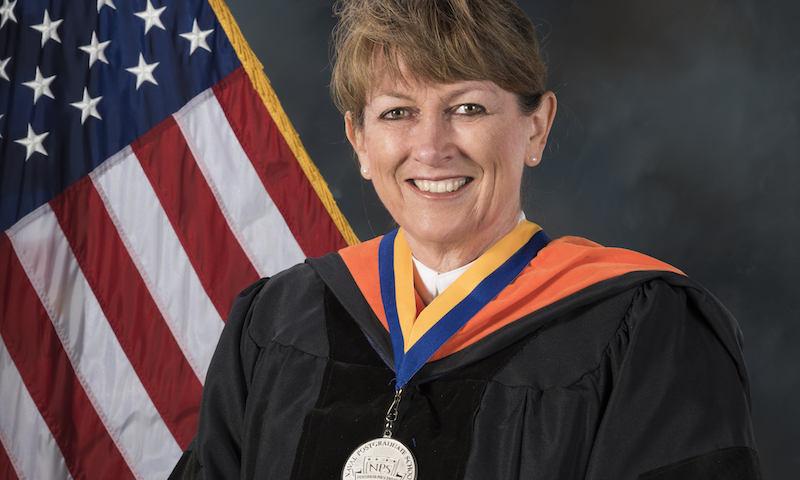 Vice Adm. Jan E. Tighe is the 23rd inductee into the Naval Postgraduate School’s prestigious Hall of Fame. Tighe is a master and doctoral graduate of the university, and served as its president from November 2012 through October 2013.

Vice Adm. Jan E. Tighe was presented with the NPS Hall of Fame medal – honoring her momentous service to the nation, the Navy and NPS – at the Spring Quarter Graduation ceremony held in King Auditorium, June 15, for which she was the guest commencement speaker.

Tighe, the first woman to command a numbered fleet in U.S. Navy history, humbly accepted the award and, asking NPS faculty and staff to rise, directed the audience applause to them.

“It is always special to return to NPS, it feels like coming home and that is because of the NPS family that I have here,” Tighe said.

“Without a doubt, I am where I am today because of the partnership, support and things we accomplished here in 2013,” she continued. “I want to say thank you very much to all of you, and I am accepting the NPS Hall of Fame induction on behalf of all of us, together.”

From November 2012 through October 2013, Tighe served as the president of NPS. Her tenure came at a challenging time for the university, taking over just after the release of a Naval Inspector General report that led to unprecedented change at the school. Then a one-star flag officer, Tighe diligently worked to galvanize the campus to recommit to the unique space it fulfills within the Navy.

“During her time at NPS, Admiral Tighe helped lead the school out of a very difficult period in its history,” recalled current NPS President, retired Vice Adm. Ronald A. Route, who succeeded Tighe in the office. “After that rough time, she was instrumental in putting NPS back on the path to success.”

“Admiral Tighe’s induction in the NPS Hall of Fame is a tribute to her long history of service to her country and her many achievements,” Route stressed. “It also recognizes her as a distinguished ambassador from the school and is a testament to the high level of accomplishment and excellence that NPS is known for.”

Tighe’s intimate understanding of the university was instrumental in her accomplishments on campus as its senior leader. In June 2001, she earned her Ph.D. in Electrical Engineering from NPS, as well as a master’s degree in Applied Mathematics.

When she returned to the fleet after graduation, she brought her new knowledge forward, she says, applying it within several organizations including the National Security Agency and U.S. Cyber Command, among others.

In April 2014, she became the first woman to serve as a numbered fleet commander when she took charge of the Navy’s Fleet Cyber Command, U.S. 10th Fleet (FCC/C10F). In this position, she was responsible for executing a full spectrum of the Navy’s offensive and defensive cyber, information network, electromagnetic, space and signals intelligence operations.

From there, she became the Deputy Chief of Naval Operations for Information Warfare in July 2016. In this position, Tighe has worked to integrate information warfare capabilities across the Navy and advocated multi-domain operations, which allows the Navy to leverage information systems already in place.

“A gifted and dynamic leader, Vice Admiral Tighe has been a driving force in the development and use of information as a warfighting capability at the tactical, operational and strategic level throughout her career,” her NPS Hall of Fame citation reads.

Tighe is the 23rd person to be inducted into the NPS Hall of Fame in the institution’s 109-year history.

The NPS Hall of Fame recognizes the accomplishments of the school’s most distinguished alumni and friends who, through the attainment of positions at the highest levels of public service, have made the greatest contributions to society, their nations, and to NPS.