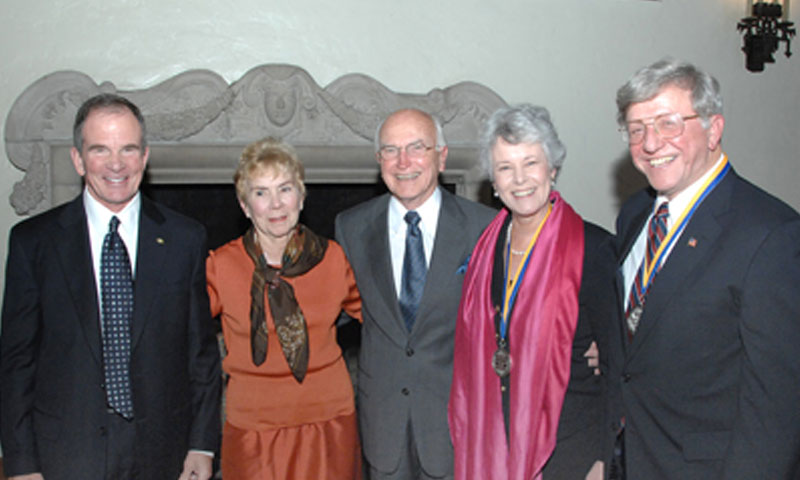 Friends and family of three NPS Hall of Fame inductees filled the Quarterdeck of Herrmann Hall with the melodies of the Del Monte Brass playing in the background. It was a warm walk down memory lane when President Dan Oliver took to the podium to present the awards to Nancy Hughes, wife of posthumous inductee retired Navy Vice Admiral Thomas Hughes; retired Navy Admiral T. Joseph Lopez, and retired Navy Vice Admiral Patricia Tracey. Oliver offered personal anecdotes of his interactions with each of the inductees, garnering laughs from throughout the audience, and the honorees themselves.

Honoring the first of the three inductees, Oliver recalled the honesty and determination that had earned Admiral Hughes a reputation for being a guy who gets the job done. As the 13th inductee, Hughes was also deservingly the first to ever receive the Hall of Fame honor posthumously. He received his Master of Science degree in Operations Analysis from NPS in 1962. He also served as a Distinguished Visiting Professor, as well as Acting Dean of the Graduate School of Business and Public Policy before his retirement in 2007.

Oliver shared a story of a trip where the Admiral and a colleague boldly visited the Pentagon without making any appointments beforehand. Admiral Hughes roamed the halls and knocked on doors until he was invited in. His colleague later recalled it was the most successful day he had ever had at the Pentagon – and all without a single appointment.

“He was never concerned about being politically correct,” said his widow Nancy Hughes, whose touching tribute to her husband misted eyes throughout the gathering. “In fact, I don’t even think that term was around when he was in the Navy. But he loved the Navy and what it stood for. He was always motivated by what was best for the sailors and the Navy. He was truly my hero.”

Admiral T. Joseph Lopez, the second inductee honored, graduated from NPS in 1973 with his Master of Science degree in Management. He is the 14th member of the Hall of Fame to date, and has served as a member of the NPS Board of Advisors. He has actively been involved in strategic planning efforts and academic matters for the NPS community for the past 10 years. He recalled his days in the Navy with pride.

“There is simply something extraordinary about the United States of America. I’ve visited over 60 countries in my Navy career and quite a few more sense then. The more I learned about the world, the more I learned about us, and the more extraordinary I find our country. We are not envied so much for our wealth, but for our freedom. One right that is not exactly spelled out in the Constitution or the Bill of Rights is the right to succeed. And without that right, I could not be here today. Truly, in America, perseverance and determination are omnipotent.”

For Oliver, the honor was a proud moment as well. His professional relationship with Lopez spanned throughout both of their careers in the Navy, and Oliver noted it was a privilege to know “the guy who always has the answers.”

“I can’t even tell you what an honor it is to stand beside you and present you with this award,” Oliver told Lopez.

The third inductee of the afternoon, and 15th member of the Hall of Fame, Tracey, also happened to be the first female inductee. It was a milestone that Oliver explained was no surprise, noting her determination and drive that carried her through her career, becoming the Navy’s highest-ranking female officer, and made her somewhat of a celebrity within the defense community.

“I don’t want to dwell on the fact that she is the first female inductee,” said Oliver. “The fact is, regardless of gender, she always had the chops to do whatever she wanted to do.”

Tracey received her Master of Science degree in Operations Research from NPS in 1980. Education was an integral part of her career, serving her well in her position as the Chief of Naval Education and Training.

“I am so proud to be associated with this institution that makes people think differently about the world around them,” said Tracey.

The Hall of Fame (HOF) highlights distinguished alumni and friends who have had tremendous impacts on their community, their country, and the Naval Postgraduate School. The HOF began in 2001 and now has 15 members including Chairman of the Joint Chiefs of Staff, Mike Mullen; and former Mayor of Monterey, the Honorable Dan Albert, who also attended the induction ceremony this month.