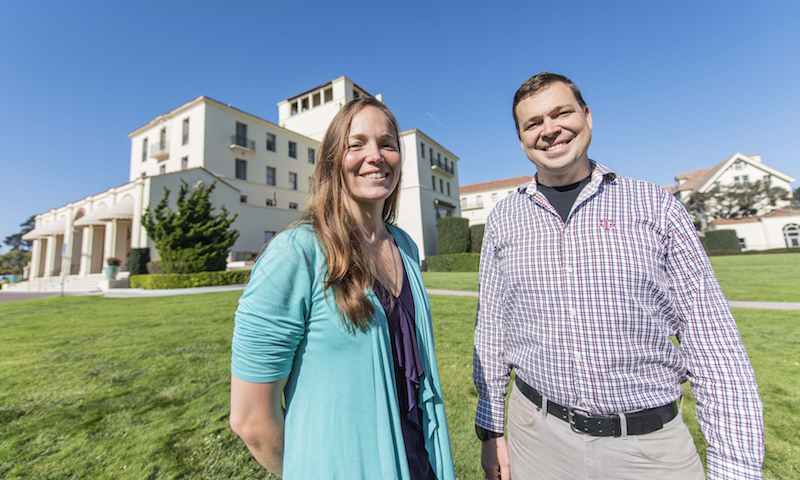 Marine Corps Maj. Alissa Tarsiuk and Navy Cmdr. Durward Dunn are two of the 20 students who participated in the latest iteration of the NPS Industry Internship Program. The program provides brief internships at leading companies, connecting NPS students with experiences that enhance their research and professional interests.

In the short time since, the university has more than doubled its participation in the unique program, sending a total of 20 students in its latest iteration to private sector partners, ranging from Amazon to Lockheed Martin, in an effort to align with the Secretary of the Navy’s initiative to establish partnerships between the DOD and industry.

“This program is meant to expose students to a different way of thinking with the hope that the brief exposure these students get to these companies will give them a deeper understanding of the fields they are studying,” said NPS Dean of Students Navy Capt. Markus Gudmundsson. “They start off with the academic understanding, but after being paired up with industry partners, they are the exposed to their studies in practice.

“When they come back, this experience not only helps form their theses, but can also guide their next courses of study, and even their careers as well,” he continued.

Before embarking on their internships, students fill out in-depth applications, including their background, interests, fields of study and where they wish to go. This information is compared with a list of companies that have self-nominated to host internships.

“Each student has an itinerary that is tailored to their interests and what they want to accomplish. For example we sent four students to Boeing, but those students did four different things,” said Lt. Janet Eddy, who played a pivotal role in organizing the program. “In a lot of ways, military and civilian companies speak unique languages, so programs like these are essential to building a bridge between the two communities.”

Each student spent one week in late September on site at several different locations learning the tools of the trade from top companies that include Amazon, Boeing, Lockheed Martin, the Elbit Corporation, Raytheon, the Cubic Corporation, AFWERX and Creare LLC.

“The hope is to build a relationship with industry, so when industry wants specific research into a specific area they think about NPS as a resource,” he continued.

For Marine Corps Maj. Alissa Tarsiuk, the Industry Internship Program provided a chance to explore the process of how industry selects its leaders. She heading north to Seattle, Wash., to the headquarters of Amazon, where she spent a week examining how a massive, multinational corporation hires its employees on all levels.

“Amazon is one of the fastest, globally dominating companies in the world, and I wanted to see how they ensure the people that they are hiring are in line with their culture and leadership principles,” said Tarsiuk.

“One of the biggest takeaways is that they are absolutely committed to their principles and culture, and I was surprised that a place like Amazon, that is so diverse and so broad, had such a strong culture. It is a lot like how the military has so many different job fields but still maintains a central identity,” she added.

Throughout the week, Tarsiuk met with military liaisons as well as sat in on phone calls, interviews and training on how Amazon hires its people, focusing heavily on preserving Amazon’s unique culture and principles.

“Their leadership principals are located all over their buildings. Their buildings are named after important figures. Everything they do has a sense of purpose that ties back to who they are as a company, so there is this very real sense of identity of who they are,” noted Tarsiuk. “The number of steps involved in hiring their managers, from who is involved, how they train the interviewers, to the requirements that they all go through to ensure that they are hiring the right fit to continue the Amazon vision was surprising.

“Every employee that I spoke with believed that identity and felt that was who they were, which made me really think about how applicable that could be for the Marine Corp to take some of these methods that localize them to our culture,” she continued.

One of the most essential values that Amazon promotes was that of innovation and a tolerance of failure, Tarsiuk noted.

“They have this mindset that it’s ok to fail but fail fast, because when there is failure sometimes out of that comes some of the greatest innovations,” said Tarsiuk. “But in the military, we don’t allow ourselves to fail or try new things. The expectation is that people are creating and run with their ideas to see what works and what doesn’t.

“In my experiences in the Marine Corps, I would like to see that same ability to fail smartly and quickly recover,” she continued. “To innovate and take the risks, we expect ourselves to come up with these new ideas but our culture doesn’t align with failure, so we need to allow ourselves to fail in a safe way so new ideas can come.”

According to Tarsiuk, the internship also provided the opportunity to strengthen her thesis, entitled “Choosing the best and most qualified O-5 level commanders: A qualitative and quantitative analysis of the United States Marine Corps Command screening process.”

“I am very appreciative of the opportunity that this internship provided, I have been in The Marines for 11 years now and it’s easy to forget what happens in the real world,” said Tarsiuk. “Now I have some real-world experience that I can apply to strengthen my thesis.”

“The amount of training and background Amazon requires to interview an applicant is extensive and for a company that goes through tens of thousands of applicants a week. To put that much emphasis on who hires people, we should absolutely be doing the same thing in the Marine Corps,” she added.

In addition to connecting students to programs of relevance to their thesis, internships also give students the opportunity to explore production to gain a broader understanding of the systems that may be using throughout their careers. Take Navy Cmdr. Durward Dunn, for example, whose internship with Lockheed Martin offered a unique perspective on a technology the Navy uses every day.

“For my internship, I got to visit their technical campus, their advanced product development center and their main plant,” said Dunn. “While I was there, I had the opportunity to talk to a few Lockheed senior fellows about future Lockheed Martin projects involving nanomaterials, including carbon nanomaterials and other nano projects of interest to the Navy.”

A Lockheed senior fellow is a non-management senior technical advisor that, according to Dunn, seem to be significant assets to the company. The experience provided him with a deeper understanding of the systems that he will be using as an Engineering Duty Officer.

“We were able to go over future projects involving radar and other AEGIS combat systems, and we were actually able to provide some insights to them of how we use the systems in the fleet,” said Dunn. “It was good getting to talk to some tech experts and seeing some of the problems they were having and relating it to issues that I was having.

“It was also a good way of seeing the directions that things are going as someone who will be taking this knowledge directly back to the fleet with him,” he continued.

Prior to becoming a student at NPS, Dunn cited his time serving as a Combat Systems Officer on a Cruiser as an experience of working with Lockheed Martin systems, noting that understanding these systems plays a huge role around the fleet.

“Understanding how the private sector works is interesting in a lot of ways,” said Dunn. “We get an understanding of how they structure their teams and their business processes, which gave me a lot of insight into how their organization accomplishes their mission.

“For example,” he continued, “If in a future job, I am a weapons deputy program manager for a radar system and I’m working with Lockheed, I now know how their thought process works and their goals. If they align with our goals, its to the benefit of both of us.”

Dunn’s thesis focuses on working with carbon nanotubes to increase their electrical conductivity in a polymer material.

“For me, these internships are good because you can line up both an academic viewpoint and a technical one,” said Dunn. “Talking to senior Lockheed technical guys who are doing nano projects, and to learn about other projects going on, gave me an outside the box perspective on a lot of problems. For example, I needed a new way to conduct an experiment for my thesis and seeing all the different approaches they are doing helped shed new light on what to do moving forward.”

Looking ahead, and seeing the value of the internship program to students, Gudmundsson says he hopes to continue growing the program. He envisions a program that is sending students for short industry experience internships throughout the year when class schedules permit. But to make it possible, he says, the program will need further support.

“We have been running this program without a dedicated budget and manpower, but we have been fortunate to have the expertise of military staff that can pick this up as a project. And the budget has been supported by the NPS foundation ... Without them we would not be able to have the money required for the travel involved in this program,” he said.

“Ultimately, we are trying to improve the value of an NPS education,” he continued. “Those in the fleet should see this as a fantastic opportunity to be exposed to things that they would not otherwise see ... It’s just one more reason to want to come here.”

For more information on this unique program, contact the NPS Dean of Students Office at dosea@nps.edu.