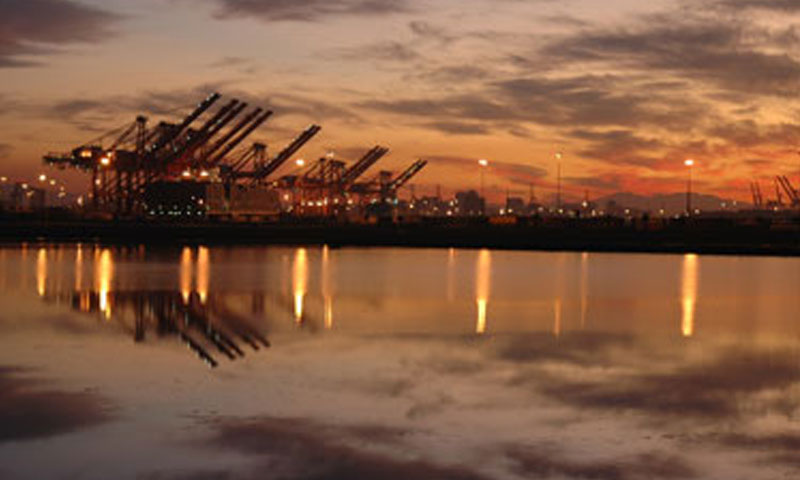 The sun rises over the ports of Los Angeles and Long Beach during a rare, quiet early morning moment. The ports combined represent the busiest seaport in the United States, and served as one of the MIST program’s original pilot locations to identify major maritime security information sharing challenges among local private and public sector players.

A prime goal of post-9/11 homeland defense is information sharing across military services and government departments and agencies. Now, a new initiative by the Naval Postgraduate School is capturing and integrating the expertise and knowledge of the private sector shipping and sea tourism industries to enhance national and global maritime domain awareness (MDA) and security.

The new program, the NPS Maritime Information Sharing Taskforce (MIST), conducts interviews and surveys and facilitates port workshops linking commercial shippers and port operators with representatives of the Navy, Coast Guard, Department of Homeland Security and federal, state and local governments. Its core mission is to establish a two-way communication and active partnership between the government and the maritime industry.

The MIST initiative began as a pilot program in the ports of Los Angeles/Long Beach and Seattle/Puget Sound to identify and understand the major maritime security information sharing challenges among local private and public sector players. Jump-started by Maritime Domain Awareness (MDA) direct research seed funds from the Navy, the program soon gained co-sponsorship by the Department of Transportation Maritime Administration (MARAD) and the Coast Guard.

“We identified a major need – to capture, integrate and leverage the voice of key private stakeholders in maritime homeland security – and filled it,” said MIST project manager Wendy Walsh. “Though there’s been a massive effort in maritime domain awareness since September 11, and a basic tenet of U.S. maritime security policy is to partner with and expand links to the maritime industry, no one was yet looking at how security-related information is shared locally among private shippers and port operators who can often be overwhelmed by uncoordinated and conflicting [official information] requests,” Walsh explained. “MIST’s interactive, invitational port seminars address this gap by bringing together key public and private players to frankly discuss and capture maritime homeland security challenges and propose solutions that everyone can act on,” Walsh noted.

“This is vitally important, because there are more private industry ships on the water and in the ports than in all of the Navies combined, and we need to leverage that experience and knowledge if we’re gong to have complete maritime domain awareness.” Walsh stressed.

“Examples of solutions that have been addressed at our workshops are to create a new private-side information clearinghouse to deconflict, fuse and streamline information requests from official agencies like the Navy, Coast Guard and Homeland Security’s Customs and Border Patrol and act as an information broker between the regional Joint Terrorism Task Force and the maritime industry; a new interagency operations center and 1-800 number for sea captains to call for the most up-to-date official information about potential threats and emerging security situations; how to increase incentives for commercial shippers to share what they know without compromising proprietary information; and new ideas about how to do joint boarding operations,” Walsh noted. 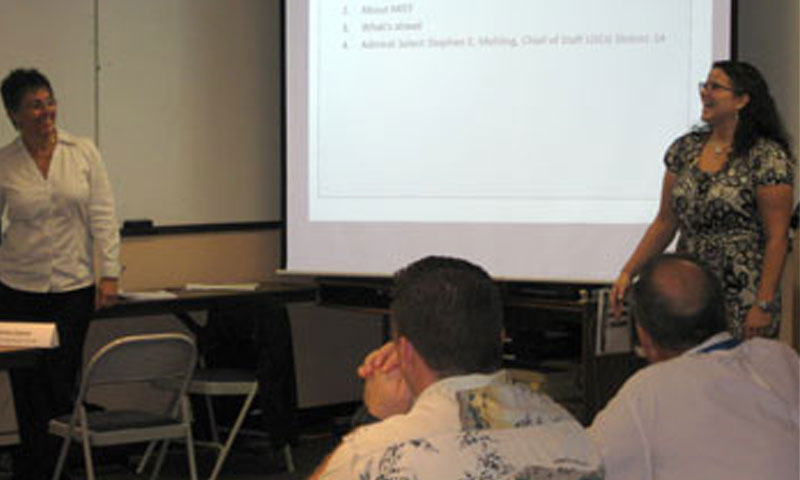 MIST Lead Researcher Anita Salem, left, and Project Manager Wendy Walsh, right, begin their most recent workshop at the Port of Honolulu. The workshop included participants from the private shipping industry and local port authority, Coast Guard, Customs and Border Protection, the Joint Terrorism Task Force, Immigration and Customs Enforcement, the Naval Criminal Investigative Service and the police, among others.

The report from MIST’s initial Los Angeles/Long Beach seminar won acclaim and captured the attention of Rear Adm. Lee Metcalf, then head of the Office of Global Maritime Situational Awareness (OGMSA), a multi-agency U.S. entity responsible for ensuring maritime situational awareness by facilitating effective access to interagency and international information sources impacting safety, security, the environment and the economy. At the time, OGMSA was about to hold the first Global Maritime Information Sharing Symposium, in 2008, to better coordinate government interaction with the maritime industry, improve and increase industry-government maritime information sharing relationships, and create new channels to bring industry issues before the interagency bodies that coordinate government maritime policies.

“The timing couldn’t have been better,” Kline noted, “and only a year later the lessons learned captured by MIST’s outreach to the maritime industry are being actively integrated to inform national and international audiences on MDA issues and policy. In fact, MIST’s week-long September symposium was synchronized and fully integrated with OGMSA’s 2009 Global Maritime Information Sharing Symposium on ‘Streamlining Information Sharing: Improving Efficiency, Security, Safety and the Environment.’”

“It was a symbiotic partnership,” Walsh agreed. “They were looking at the national and global levels and we were focusing on capturing ‘day in the life’ snap shots at the local level. We saw the convergence and became collaborative, and the planning for our port seminar and the conference moved forward in concert.”

“One of the most important lessons from these brainstorming sessions is that when you’ve seen one port, you haven’t seen them all,” Walsh stressed. “Each port’s security processes and relationships and information sharing between the public and private sectors are unique. Some, for instance, are focused on [sea] container traffic and others on ferries, some on roll on-roll off [vessels] and some on barges carrying bulk cargoes like grains. For most, the terminals are privately owned, but for some, like Honolulu, all but one are state owned. And we learned not to make assumptions about specific maritime companies and how they operate in a region.”

“We took the Puget Sound report to the Assistant Secretary of Defense for Homeland Defense, to the then maritime director,” said Walsh. “They liked its recommendations and said that what they need are specific solutions, so at the next workshop, in Honolulu, we took it to the next level.”

The Honolulu workshop, in late November, included participants from the private shipping industry and local port authority, Coast Guard, Customs and Border Protection, the Joint Terrorism Task Force, Immigration and Customs Enforcement, the Naval Criminal Investigative Service and the police, among others. In conjunction with the event, Walsh presented a MIST brief to the Facility Security Officers meeting of Honolulu’s Area Maritime Security Committee. “Honolulu has taken the lead to formalize training for its security guards in the port environment, to professionalize and certify their roles,” Walsh added. She has also presented to the Maritime Domain Awareness Stakeholders Board, a group of all federal agencies addressing the MDA challenge.

Next on the agenda, according to Walsh, is a workshop and exercise with the New York/New Jersey Port Authority, and increased participation by the Coast Guard. “We’re actively seeking funding for this,” she said.

“MIST owes a great debt of gratitude to Jeff Kline, director of the NPS Maritime Defense and Security Research Program,” Walsh added. “He’s been a great leader, mentor and sponsor. He gives us the autonomy we need to succeed in the project.”

In addition to Kline and Walsh, other key members of the MIST team are lead project researcher Anita Salem of the NPS Graduate School of Business and Public Policy, and NPS Research Associate Lyla Englehorn, a graduate student at the Panetta Institute.