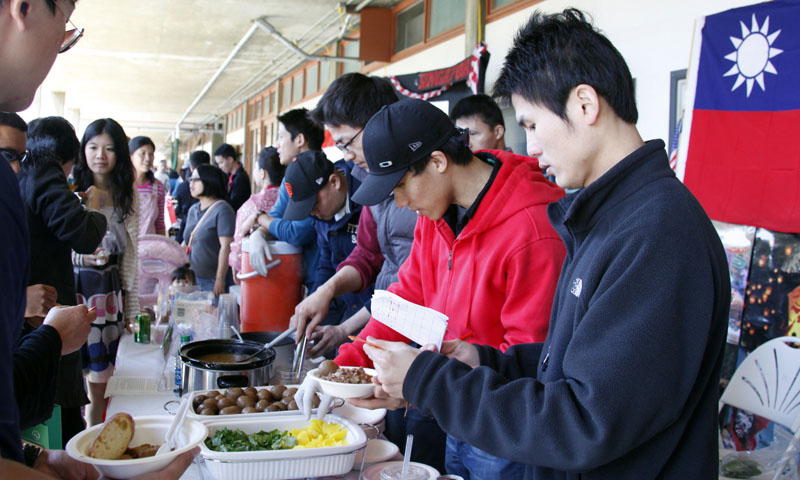 A delegation of students and spouses from Taiwan serve up a variety of traditional dishes to a long line of hungry attendees. More than 25 nations shared traditional food, faire and cultural information during the return of the Naval Postgraduate School’s International Day, April 27.

The Naval Postgraduate School’s International Day, a cultural showcase of diversity in the student population, returned to campus with near record crowds as more than 25 countries offered food, faire and information along the campus quad, April 27.

“The guests we interacted with throughout the day continually praised the student-led country booths for the quality of food, enthusiasm in showcasing their countries and the overall atmosphere of the day,” added IEC United States Co-Chair, U.S. Marine Corps Capt. Adam Yang.

“[It was a] great turnout and lots of fun had by all,” added NPS Interim President, Rear Admiral Jan E. Tighe. “Seeing the kids dressed up in their traditional outfits was a special treat. I definitely ate too much, but it was worth it to get a sample of so many diverse and new dishes! Congratulations to the IEC for initiating and delivering such a fantastic event.”

Representatives from all over the world participated in the celebration with food, varying demonstrations of culture including dancing, singing and handcrafts, all performed by NPS students and their families. Each booth featured some of the respective country’s most popular dishes, including German sausage, baklava, a Brazilian soda, and Turkish coffee.

Field Studies Program Coordinator for International Programs, Kim Andersen noted that, while the numbers are still being tallied, the return of this once annual event helped raise thousands for the IEC.  “NPS International Day is usually an annual event, but hasn’t been held at NPS since 2010. This year’s success was major.”

"Our International Executive Committee composed of volunteer NPS students from nations around the world, along with our office staff, worked diligently to organize and manage this event, and the strong attendance showed their efforts were well executed and highly rewarded,” added Roser.

As a group, the countries represented the international partnerships and collaborative roles that NPS takes in educating military leaders from across the globe. As individuals, countries were able to showcase their pride for their homeland, and the cultural diversity in terms of food, music, art, history and experience that each student brings to the NPS community.

“We believe that we were extremely successful in presenting the cultural diversity of NPS to the local community, and also in creating very special memories for our guests and participants for years to come,” said Yang.