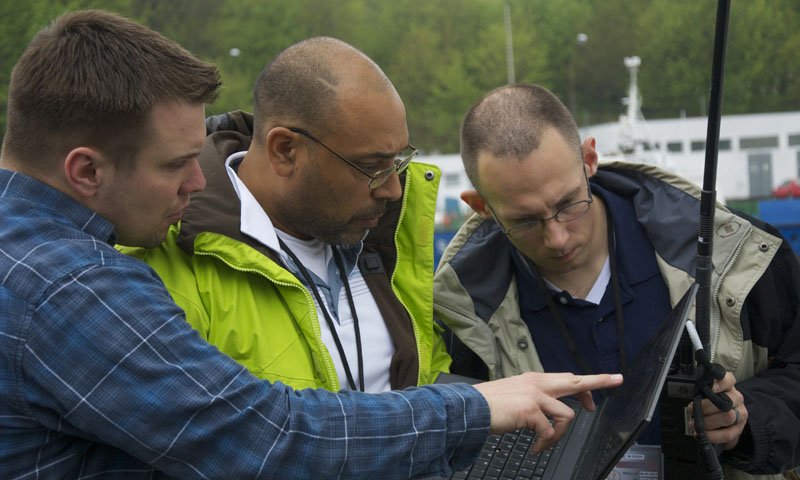 The experiment was conducted in several phases tied to a Polish military exercise in the fictitious nation of Polarmia. During the exercise, Polish and Norwegian SF operators sought out notional members of an international terrorist organization.

To find the terrorists, SF operators followed a trail made visible through a forensics analysis process known as Sensitive Site Exploitation (SSE). SSE activities led the group to several safe houses and a Polish vessel where team members uncovered a terrorist plot to detonate a radiological device in a populated European city.

“My overall objective in conducting these experiments was to explore the manner in which sensor networking and collaboration support for WMD ISR, as requested by our sponsors, such as the Defense Threat Reduction Agency, could be done,” said Bordetsky.

“We are looking at all of the different components, at various levels, that are necessary to conduct WMD ISR,” Bordetsky continued. “In our current experiments, we are experiencing a rapid, collective design process because we are working in conjunction with real operators, in action, who are adopting the technology solutions that we are integrating in real time.”

Those solutions included a dizzying array of advanced networks, computers, communications, robotics and chemical, biological, radiological and nuclear (CBRN) sensing techniques designed to prevent the unthinkable from occurring – the detonation of an improvised WMD by a terrorist organization.

To accomplish this, Bordetsky and his colleagues used standoff nuclear and explosive material threat detection technologies. They also built a mobile network architecture into which they integrated tactical units equipped with hand-held, portable and unmanned systems based detectors and created information management architectures for sharing CBRN alerts.

But the NPS student and faculty researchers on Bordetsky’s team did not keep their experiments to themselves. Their lessons learned were incorporated into the Polish led military exercise. Additionally, Bordetsky’s team took advantage of tactical pauses to train their partnered Polish SF operators.

“I can set up a customized scan on a memory stick that will look specifically for information tailored to meet my needs and extract it from the system of my choice,” said Sinsel. “We use the Cell Exploitation (Cellex) application, it can extract information from all currently used cellphones.”

U.S. Marine Corps Capt. Robert Schulz demonstrated the use of a mobile biometric collection technology that can be used to capture fingerprints, iris scans and other important biometric data.

“This data can be collected on the scene and then uploaded onto a server to be compared against lists of known terrorists or other persons of interest,” said Schulz.

“It’s good to be able to see different systems and how they work together, this is the sort of thing that we only see in movies and video games; now it’s here in reality,” said Gierlach.

“Our ‘door kickers’ have been quite surprised, this sort of technology and experimentation is something that is very interesting … as a member of the Polish Forces it’s great to be involved. We get a chance to work with our U.S. and Norwegian colleagues and these international coordination opportunities help us with our European and U.S. alliances,” continued Gierlach.

But the tactical pause did not last long; Polish SF operators were ordered to respond to a report of suspicious activity at a technical university in Gdansk. A suspect vehicle was identified and a GPS-enabled device attached to it allowing the NPS team and their partners, distributed from Gdansk to Monterey, to track its progress via the Center for Network Innovation and Experimentation (CENETIX) testbed management portal– a site which incorporates GPS tracking into a map-based site providing a situational awareness view. 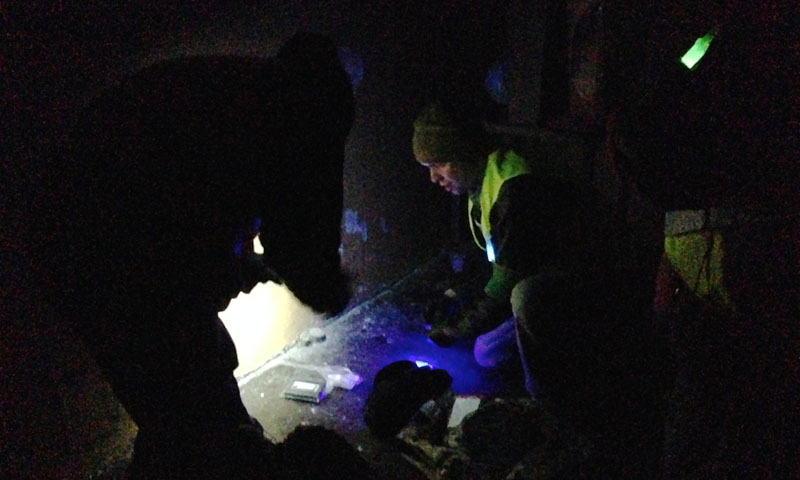 “The software takes GPS coordinates and sends them back through either satellite or cellular networks to create a ‘track’ in the shared common operational picture,” said Bordetsky. “The site was designed by CENETIX Senior Researcher Eugene Bourakov who was assisted by two University of Bundeswehr thesis students, currently participating in a research visit to CENETIX.

“Eugene was on line with us throughout the whole course of our night operations, acting as networking-situational awareness, remote subject-matter-expert,” added Bordetsky.

Meanwhile, the dual-purpose tracking and detection devices used in the experiment were read by tag-readers utilizing Bluetooth technology which pulled data from the trackers and transmitted it to an operations center.

“If we pass by a tagged target, we can extract the data and upload it for analysis,” said Bordetsky.

Coincidentally, on day two of the NPS experiment, several international news outlets reported on the seizure of 375 pounds of radioactive material by Ukrainian Security Forces, a report whose significance was not lost to the experimentation team, which had traveled from the U.S. and throughout Europe to develop the means to detect and defeat specifically this kind of threat.

Nuclear Disablement Team Two Chief Army Col. Robert Schlicht of Buffalo, New York is no stranger to the tracking of WMDs.  He is working with Bordetsky to help researchers to understand radiological and nuclear exploitation.

“We exploit adversarial attempts to gain nuclear, radiological weapons capabilities by conducting sensitive site exploitation,” said Schlicht. “Our mission is to exploit foreign nuclear infrastructures and to prevent the proliferation of weapons, materials and information that could lead to a nuclear capability.”

Coincidentally, in the process of conducting the experiment, Schlicht identified a building that was contaminated by a radiological substance at an airbase in Northern Poland and reported his findings to the relevant authorities.

To Hel and Back

Roboteam Manager Eli Shukrun and Vice President Ari Diamond took part in “low visibility” operations in the Polish City of Hel, May 8. Shukrun and Diamond were sponsored by the Office of Naval Research Global to introduce a unique unmanned system formation to the experiment. They are part of an Israeli Defense team that has developed a lightweight; mesh-communications enabled, robotic system dubbed the Micro Tactical Ground Robot (MTGR).

The incorporation of Roboteam “was needed to explore self-forming networks in support of joint SF direct action and the subsequent SSE/WMD detection which was facilitated by means of a robotically laid down network,” said Bordetsky.

As the exercise commenced, Shukrun piloted his MTGR robot toward the shoot-house occupied by the notional terrorist group. As he moved through the combat area, he was able to observe his surroundings through the robot’s seven, night vision-enabled cameras and witness the “direct action” taken by Polish SF operators as they sought to neutralize the terrorists. MTGR robots are actively involved in scenarios like these around the world.

“MTRG is currently in use by U.S. EOD [Explosive Ordinance Disposal] forces in Afghanistan and it is being used by Israeli Defense Forces (IDF) to explore tunnels between Israel and the Gaza Strip and by Israeli SWAT and Special Forces teams,” said Shukrun.

According to Bordetsky, Roboteam provided a “critical unmanned systems component,” to the experiment leading to the breaking of new ground.

“Roboteam led us to a breakthrough … It was the first time that we were able to use robots to lay down the relays necessary to create our self-forming network,” said Bordetsky.

After Polish Forces stormed the shoot house in Hel, quickly clearing it of hostile forces and successfully capturing several notional terrorists, Schulz and Sinsel began the arduous process of conducting SSE and uploading biometrics and other data taken from seized cell phones and laptops to the CENETIX website.

Romanian Physicist Bianca Barbu with NATO Headquarters, Supreme Allied Commander Transformation (SACT); Experimentation Integrator Martin Garvey, a contractor with Pervus Systems; and, Hungarian Army Lt. Col. Ferenc Menyhart with the Joint CBRN Defense Center of Excellence were part of an observer team that traveled to Poland to observe Bordetsky’s experiments. They were tasked to gather information that may eventually lead to a comprehensive WMD disablement concept and the development of common collection and dissemination protocols.

“NATO is interested in how and what type of information is being collected here,” said Barbu. “Once we understand why the information is being collected, we can place it within an international context and figure out the minimum requirements necessary, according to NATO standards, to have a cohesive front when conducting international operations.”

“We need to understand how SSE is conducted, what is being collected and why, because in the end that data affects the decision-making processes,” added Garvey. “We are trying to gather a first idea to determine the minimum requirements and then work with specialists to refine the processes.”

It was those very processes that were demonstrated when experimentation team members were tasked with developing a wave relay network aboard the Polish training vessel, Copernicus, May 9. The network was established by incorporating mobile and robot mounted wave relay radios. Armed with a gamma radiation detector, the MTGR systems were used to locate a radioactive source hidden aboard the ship. 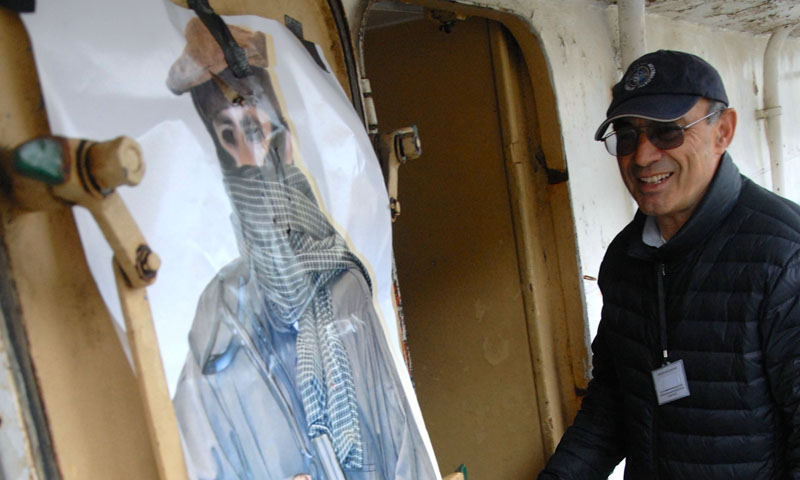 “We were given access to both a radiological source and a ship that was made available to us, this target of opportunity, gave us an excellent chance to test our detection, network and SSE capabilities,” said retired Army Col. and NPS doctoral candidate Steve Mullins.

Bordetsky’s team successfully “stretched” their network and worked with Polish SF members, familiarizing them with the network and allowing them to operate Roboteam’s robotic systems.

“It’s a great technology,” said a Polish Special Force operator. “This is something that would be valuable to us when conducting EOD [Explosive Ordinance Disposal] operations.”

While not an EOD operation, the system was successfully used by Schlicht to locate a radiological source hidden in a stateroom aboard the Copernicus, which according to Bordetsky, led to a proof of concept and an understanding of WMD-ISR constraints.

It’s Always Coldest Before the Dawn

Following action aboard the Copernicus, NPS students along with U.S., Polish and Norwegian SF operators traveled several hundred kilometers to a notional terrorist safe house in the Polish city of Redzikowo.

But prior to entering the safe house, the combined team worked through the night to establish an internal network and to connect via satellite uplink to CENETIX. The call to move forward to the safe house was received moments before sunrise and Shukrun and Diamond quickly deployed their robotic systems, laying wave-relay radios as the team progressed toward the terrorist safe house.

Inside the building, a Polish SF team received the NPS contingent and took part in their effort to exploit the computers, cell-phones and other items of interest scattered throughout the building.

“It was a good opportunity to see communications established and to witness the ability to transmit SSE data across the world in near real time to analysts hundreds, even thousands of miles away,” said Schlicht.

“The ability to implement all of these technologies into a single site for exploitation gave us a near, real-world test platform that cannot be recreated in the lab,” added Sinsel.

After completing the final exercise, Special Mission Unit Commander Col. Piotr Gastal met with the NPS team to discuss the status of the experiment and to thank the team for traveling to Poland and working with his command.

“We are interested in your experiments, particularly in light of current happenings in Ukraine where radioactive materials were recently identified. I hope that my guys, using these particular techniques, will be able to one day to stop or identify these sorts of materials from entering our country,” continued Gastal.

Not one to rest on his laurels, Bordetsky already has the next phase of his broad WMD interdiction research program ready for execution. The student, faculty team will travel to the Greek island of Crete this coming June, where they will continue to examine the complexities of collaborative, international interdiction operations with their international colleagues.