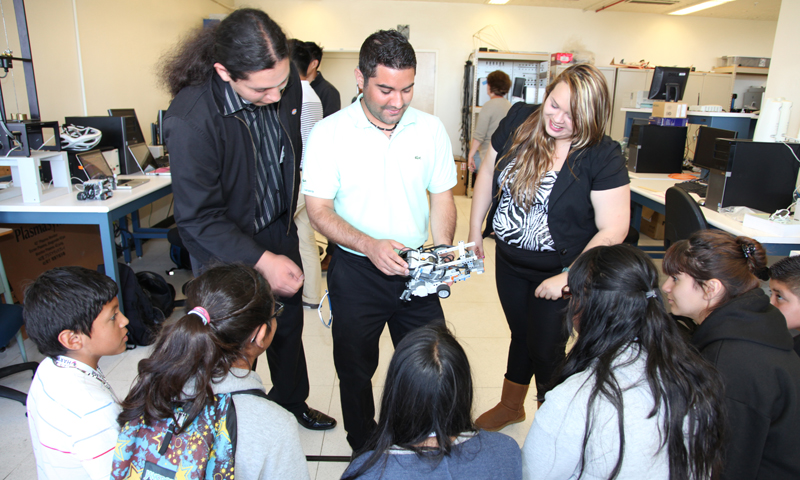 A group of Naval Postgraduate School Cebrowski Institute interns demonstrate robotics for a group of local middle school students as part of the Cyber Adventurers Program. The interns, all of whom work in labs across campus, took part in the weeklong cyber exercise as a way to help get young people excited about computer science.

While the Naval Postgraduate School’s mission is to provide education and research that enhances our national security, one of the by-products has long included opportunities for young people through various internship and outreach programs. NPS summer interns recently served as mentors for Monterey County youth in a summer camp to help to grow interest in science, technology, engineering and mathematics (STEM).

The weeklong camp was offered by the Lyceum of Monterey County, a local non-profit organization, in partnership with Hartnell College. The camp, “Cyber Adventurers – The Magic and Beauty of Computer Science” was a pilot program offered to 20 8th graders from four Salinas, Calif., middle schools. The interns, who facilitated the activities and mentored the younger students, were part of the Community College Catalyst (3C) Program, through which Hartnell College students work in NPS STEM research labs each summer. For the past eight weeks, their work at NPS has focused on networks and computer security.

The 3C interns, all computer science majors who grew up in the same Salinas neighborhoods as many of the middle school students, served as role models at the camp which was held at Hartnell College’s East Alisal campus. The interns and many of the kids were first generation Americans, and the interns are the first in their families to attend college. The interns helped the kids create their own computer games using an MIT-designed programming language called Scratch, and program robots to go through an obstacle course.

Many of the activities introduced the kids to computer science concepts without using computers. They played card games to learn about cryptography and binary code, and walked through a sorting maze to understand how computers organize data. The kids also met computer scientists where they work while visiting the Monterey Bay Aquarium Research Institute and NPS research labs. At the end of the week the young students enthusiastically demonstrated what they had learned to their parents and younger brothers and sisters.

“The Cyber Adventurers program is a result of two National Science Foundation grants for which Dr. Peter Denning has been the principal investigator,” explained Sue Higgins, Deputy Director of the Cebrowski Institute at NPS. “Both grants address the national concern over a decade-long downward trend in the number of young people choosing to major in computer science in college. The Lyceum of Monterey used the Cyber Adventurers program to offer the camp for 8th graders in partnership with Hartnell College.

“We designed Cyber Adventurers to provide a pipeline from middle school to college. Students experience the joy and beauty of computer science, learn how computer science relates to other disciplines in science, technology, engineering, arts and math,” she added. “Cyber Adventurers provides activities for kids in after school clubs and summer programs. They earn badges to provide structure and motivation for what they learn. We see the older student mentors as key to the program's success.”

Student Intern Coordinator Cassie Martin will be a junior at California State University Monterey Bay in the fall, working towards her bachelor’s degree in computer science. She was asked to join the Cyber Adventurers team because she has seen firsthand the value of hands-on work with the STEM fields.

Martin explained that before she became an intern in Research Associate Buddy Baretto’s networking lab in the NPS Department of Information Sciences, she had never really understood the practical applications of what she was learning in her computer science classes. She hoped that the kids would learn early about the opportunities available to them in computer science, and the value of paying attention in school.

“What they are learning now, how to do binary and how pixels work, simple basic computer concepts, I learned my first and second year at Hartnell. And these kids are in the 8th grade,” Martin explained. “So I feel like they have a big head start. And I don’t know how to emphasize that they really need to pay attention and be focused because when I was in high school and middle school, I wasn’t focused. I was just interested in getting through school. I think it’s a big advantage that they are getting all of this information at such a young age. I wish I would have had that when I was their age.”

The Cyber Adventurers Program is designed to invite older students to mentor and serve as role models to younger students. Intern Juan A. Hernandez has been working with computer science Assistant Professor Zachary Peterson for several weeks and has already learned fundamentals of programming that he didn’t know he was missing. He hopes to one day develop some kind of music software, and was immediately drawn to the idea of helping other young people learn things that he didn’t until his internship.

“I have learned that it’s not all about coding. It’s about designing the code. It’s about planning. Programming is pretty much the last step when programming,” said Hernandez. “It’s all about the design, planning, organizing and documenting. I thought I was a good beginning programmer before, but this internship has actually made me realize how much I didn’t know. I have learned a lot.

3C Program Manager Alison Kerr added that the NPS interns are learning lessons as valuable as those learned by the middle school students.

“Having the 3C interns as such an integral part of the Lyceum’s Cyber Adventurer program helps them learn as they teach, reinforcing their computer science knowledge from their Hartnell courses and what they have learned in their internships at NPS, while helping to inspire the next generation of students,” Kerr explained.

“I saw the impact of near-peers interacting when Claudia Garcia, one of the 3C interns, shared her story with La Paz Middle School students last year during a presentation she gave there. The young students can easily identify with someone who comes from their neighborhood, someone who shares a similar background, someone they can look up to,” Kerr added. “The young girls in particular were nodding their heads when Claudia explained how she had always asked scientific questions and would look at the world through that lens.”

The positive impact made by the NPS interns was apparent on the last day when the younger students asked, “Why is this only a week long? It would be better if it we could come back next week!”