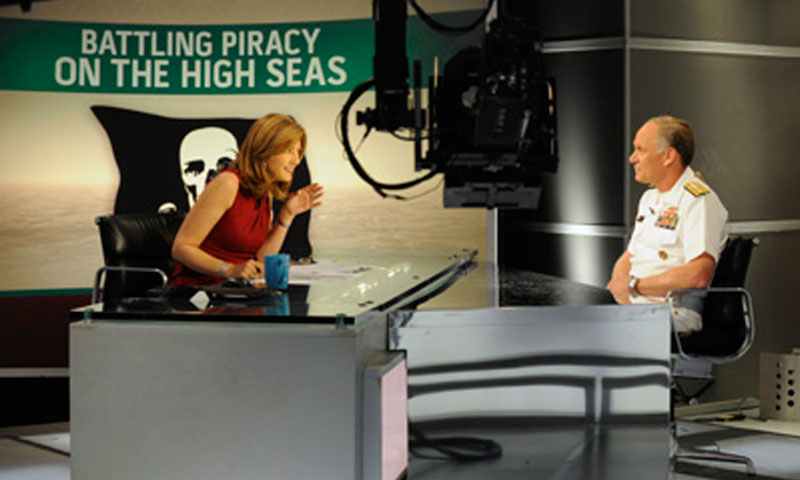 Rear Adm. Nevin P. Carr, Chief of Naval Research, speaks with Chris Jansing during an appearance on the MSNBC network news show "Jansing and Co." Carr discussed the Massive Multiplayer Online Wargame Leveraging the Internet (MMOWGLI) exercise that will recruit online players from across the government to suggest ways of combating piracy off the coast of Somalia.

Researchers from the Naval Postgraduate School’s (NPS) Modeling, Virtual Environments and Simulation (MOVES) Institute, in coordination with the San Francisco Bay-area based Institute for the Future (IFTF) launched an Office of Naval Research (ONR) sponsored online wargame, May 31, in an effort to leverage the wisdom and opinions of a large and diverse crowd via the internet.

Known as Massive Multiplayer Online Wargame Leveraging the Internet (MMOWGLI), the game invites experts and non-experts alike from the military and civilian communities to work together to generate insights into complex, real-world challenges. MMOWGLI’s inaugural theme focuses on combating Somali piracy, and gamers are invited to submit ideas that will be collaboratively developed into potential solutions or concepts of operation.

“Our goal is a diverse audience of everyone in the Navy plus anyone who's interested beyond the military, to build group insight leading to breakthroughs for Navy technology investments," said NPS Associate Professor of Information Science Dr. Don Brutzman, who is leading NPS’ development of the software for the game.

Through a process of gamer-submitted ideas and suggestions, potential solutions are continually developed, expanded upon or challenged by other players in the game. Researchers are hoping this collaboration between diverse parties will tap into the collective intellectual capital of a broader community interested in developing possible solutions, but may not have the opportunity to voice their opinions.

This capital of collective brainpower, referred to as crowdsourcing, is currently considered unrealized potential due to the fact that many players would never have the opportunity to meet outside the virtual realm or would not have been invited to weigh in on complex national defense issues and concepts of military operations. MMOWGLI changes all that by broadening the aperture, allowing policy makers a tool to foresee larger and more unimagined possibilities than currently possible.

Once ideas are submitted to the game, players can weigh in on ideas by choosing to expand, counter, adapt or explore proposed ideas and deliver feedback to the authors. After less than 24 hours of online play more than 1,200 ideas were submitted, developed and responded to by players from around the globe. Game coordinators are already taking note of the diversity of technical backgrounds current game player’s exhibit.

“Among the top 10 players, domain expertise has been demonstrated in the following areas: wisdom of crowds and collective intelligence, modeling and simulation, global commons policy and geopolitical conflict,” blogged Rachel Hatch, a member of the MMOWGLI game master team. 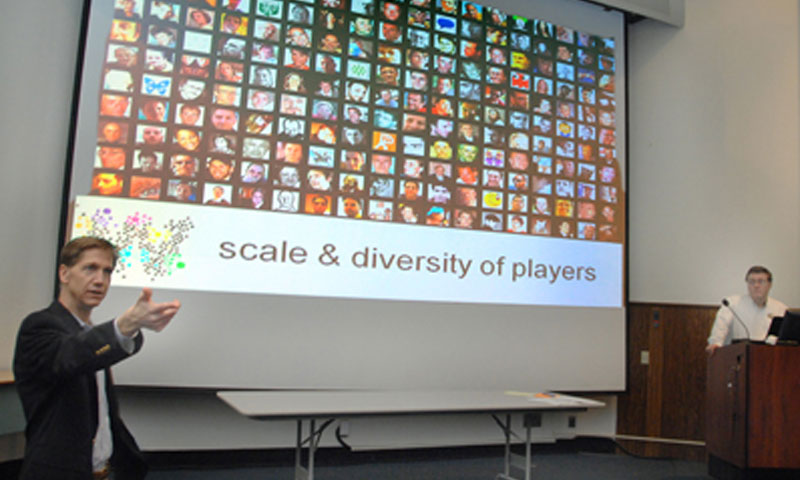 Hatch continued to outline scenarios and ideas already being expanded on in the game’s infancy.

So far on MMOWGLI, we've heard a lot of great thinking around the relationship between Somalia's overall stability and the occurrence of piracy incidents, noted Hatch. Now that a cluster of cards have formed on this topic, we want to push beyond this baseline of common knowledge, and get more specific and forward-thinking.

After developing ideas during three weeks of game play, MOVES researchers will turn to modeling and simulation to determine how plausible or effective courses of action developed could be. Players will also be invited to continue their discussions after the game completes.

“We'll then test the best new ideas that come out of the pilot through modeling and simulation, so players know if their great new idea will really work,” said Brutzman. “We are also building an after-game community of interest to continue working on piracy solutions.”

MMOWGLI debuts with a focus on countering piracy on the world’s waterways, but can easily be adapted to any problem that can benefit from the insights of a diverse and engaged population.

“Another intriguing aspect is that this web-based game is built to be repurposed, hopefully able to address any other collaborative scenario that advances the research of NPS faculty and students," noted Brutzman.

The mission of the Naval Postgraduate School is to enhance United States national security through graduate, executive and professional education programs focusing on the unique needs of military leaders, with research and advanced studies directed towards the needs of the Navy and Department of Defense. NPS students come from all United States services, DoD civilians, and the services of nearly 60 countries.