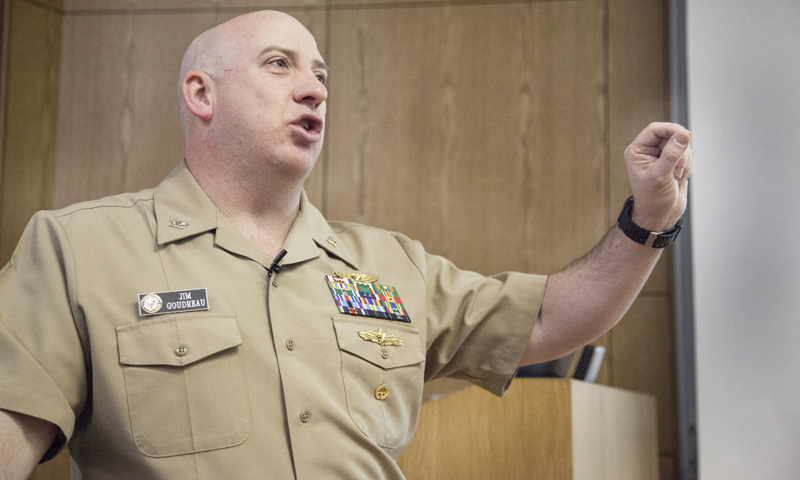 Navy Energy Coordination Office Director Capt. James Goudreau addresses NPS students and faculty at the Mechanical and Aerospace Engineering Auditorium, Feb. 22. Goudreau is one of several energy and conversation experts invited to share their views with NPS researchers as they seek innovative solutions to the Navy’s energy challenges.

“We’re seeding the future out here. The seeds we plant here are going to be the plants that grow in the future, and we want them to grow with energy in mind,” said Charette.  “That’s why we have this thesis support program … With students here at NPS, we can get not only a great thesis product, we get the product and the person.”

Goudreau’s office is also investing in the future. During his lecture Feb. 21, he made a lengthy argument for energy conservation and technological innovation. But he insisted that his passion for conservation was driven not by environmental or political concerns, but rather by a desire to maintain the Navy’s ability to accomplish its most critical wartime missions.

“As a military we must prevail in combat, there is no other reason we put on a uniform each day,” he said. “Energy translates into warfighting capability now and it translates in the future …We are having this discussion now, putting scarce resources into this endeavor, because we want to win the fight.”

Both Goodreau’s and Charette’s pleas for conservation and energy innovation come at a time when military and government institutions are being asked to do more with fewer resources.

“We are going to enter a time where we are forced to change, [but] its empowering,” said Goudreau. “It will open up new opportunities so that we can break the patterns of six decades of energy dependence. When faced with a threat, we find a solution.”

Despite Goudrea’s optimism, he also offered some frank caution as well. “Nations today rarely go to war over ideology … But nations will go to war over resources, especially if they see those resources as critical to their national survival,” he said. “How we use energy today is a tremendous vulnerability.”

The Naval Postgraduate School's Defense Energy program is the result of a mandate from Secretary of the Navy Ray Mabus to develop and institute defense-centered energy programs that respond to the Navy's need for ever-greater flexibility and resilience. In response, NPS has created a network of educators, government leaders and subject-matter experts who design and deliver innovative, interdisciplinary energy education programs ranging from graduate degrees and specialized academic certificates to executive education short courses.