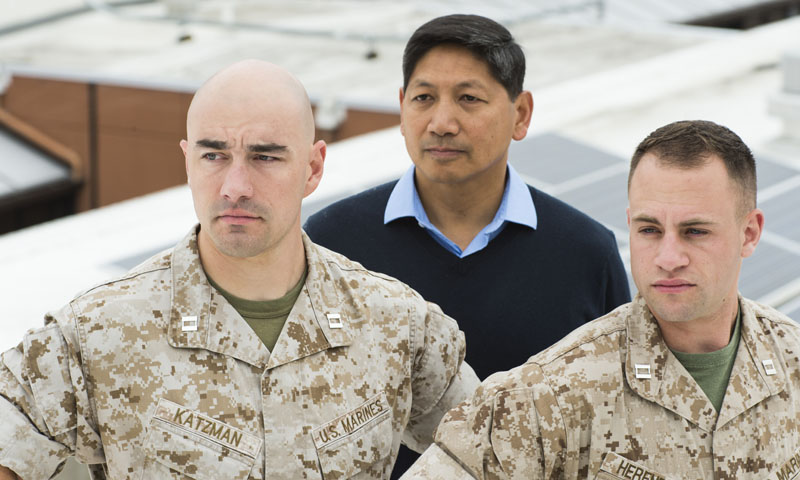 “The expeditionary energy office works for the commandant of the Marine Corps with a mission to innovate and develop the Marine Corps’ energy strategy,” said current E20 Director Col. Jim Caley.

As head of the program, Caley says the work he does is about directly supporting the Marine Corps’ primary mission. While conservation is a priority, he says, his work is not about creating a ‘green’ Marine Corps.

“We don’t do green,” said Caley. “The work that we are doing is about getting our Marine units further down the battlefield. If your energy does not get you far enough on the battlefield to get to the enemy, you can’t kill them.”

Sounds straightforward enough, but to do that, the Marine Corps required a pool of operationally-savvy academics with the right mix of officers students and researchers with the time and ability to explore the Marine Corps’ most demanding energy challenges. The Marine Corps found just that combination at the Naval Postgraduate School (NPS).

“The academic community here at NPS provides outstanding benefit to the Marine Corps and the job of the Expeditionary Energy Office,” said Caley. “Those benefits include things like getting students to study in the energy space, and not specifically in engineering, but in areas like operations analysis and in the business school where students are looking at different practices.”

Retired Army Col. and NPS Associate Professor Andy Hernandez leads NPS’ efforts to support the E20 Office. Along with his own specific research for E2O, his primary objective is to match NPS faculty and students with Marine Corps’ energy research needs.

“The research that E2O requires is inherently multidisciplinary and ranges from social and political sciences to engineering and mathematical disciplines,” explained Hernandez. “E2O provides a venue in which students can apply their newly-acquired technical skills. These opportunities reinforce classroom lessons at NPS and crystalizes them for real problems.

“At the same time, NPS is able to identify its own knowledge gaps,” he continued. “It highlights areas that NPS can strengthen in its academic programs to continue to be a relevant education and research arm for the naval community and the Department of Defense.”

One of those students is Marine Corps Capt. Michael Herendeen. He is using his thesis in the Graduate School of Business and Public Policy (GSBPP) to look for fuel saving efficiencies by optimizing the manner in which the Marine Corps deploys its premiere combat unit - the Marine Expeditionary Brigade (MEB).

Herendeen thesis, “Movement of Fuel Ashore: Storage, Capacity, Throughput & Distribution Analysis,” explores the manner in which fuel is moved ashore during MEB operations. He notes that in the absence of contracted fuel delivery, the Marine Corps’ fuel delivery operations are limited.

“In light of that problem set, I am looking at how we vary utilization rates and how we use our equipment in those operations. I want to understand how a marginal change in how we conduct operations mitigates the issue.

“It’s less conservation and more operational efficiency,” Herendeen explained. For example, when you land a MEB, and move all of its associated equipment ashore, there are a lot of decisions that have to be made. When do it move ashore? Who goes ashore? What do they do when they get there?

“Conservation is one of way putting it, but it’s really about how to efficiently use our forces given our [fuel] capacity issues,” added Herendeen.

Herendeen is utilizing the Marine Air-Ground Task Force power and energy model (MAGTF) to conduct his analysis of MEB force composition and deployment options. The MAGTF helps him to analyze fuel outputs down to the gallon per MEB vehicle, and allows him to forecast the demand side of various MEB deployment options.

“Right now we are looking at five different force compositions. What differs between them is when you land certain elements of combat power, specifically different unit types,” noted Herendeen. “For example, do we land as many tanks as we can on day one, or do we phase tank deployments out between day one and day 50? 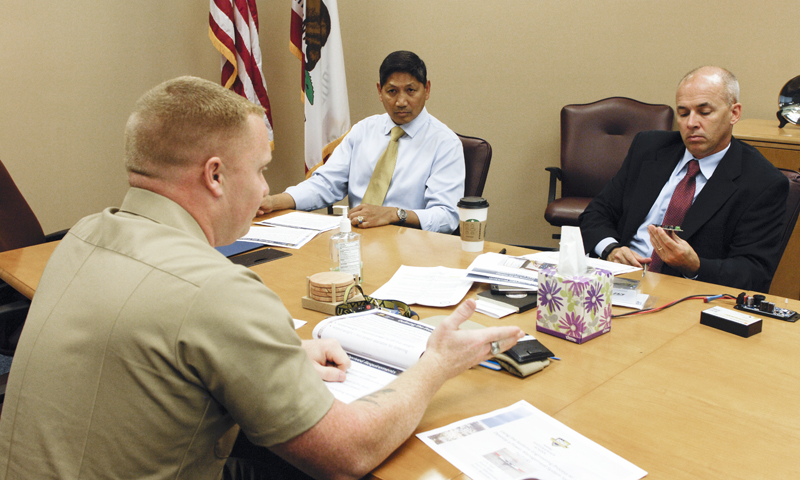 “We have spread that methodology throughout the whole spectrum of MEB operations with our left and right lateral limits in mind. It's the same process when we look at the tempo of our operations,” said Herendeen.

And while Herendeen does not believe that his research is a “golden ticket” that will solve the Marine Corps’ energy deployment challenges, he is pleased to have been able to contribute to a conversation that may lead to a long-term solution.

NPS student Marine Corps Capt. Daniel Katzman has taken a different approach to tackling the Marine Corps’ energy challenges. While working on his master’s in electrical engineering, he chose to explore the Marine Corps’ potential uses of Copper Indium Gallium Selenide (CIGS), which are used in the production of thin-filmed solar cells.

“CIGS are more robust than traditional solar cells and more difficult for Marines to break,” said Katzman. “They are something that has been around for a long time, but they have not been as efficient as typical solar cells.”

Katzman’s research was born from the realization that forward deployed Marines have become increasingly burdened by power requirements and battery inventories. He believes that solar cells have the capability to simultaneously lessen supply chains and significantly lighten loads for expeditionary units. One novel use of CIGS being explored by Katzman is the concept of a solar-powered blanket.

“The overall efficiency of this new device is expected to exceed 24 percent, which is almost double today's performance, with great potential for further improvements with higher output at a low manufacturing cost and light weight,” said Katzman. “I think CIGS hold promise for the future of the Marine Corps as we seek to reduce our reliance on fossil fuels.”

Solar blankets and other CIGS-based, solar energy harnessing devices are relatively inexpensive and may offer a practical solution to Marine Corps energy needs. They also appear to show particular utility in the solar energy rich areas in which the Marine Corps is currently operating.

“When you look at where the Marine Corps has conducted operations in recent years, it has tended to be in areas where there is a ready supply of solar energy that, if harvested, could be used to provide power for Marine operations,” said Katzman.

Katzman also believes that CIGS are well suited to the Marine Corps because they are relatively easy to make – they are sprayed on in a process known as chemical vapor deposition – and because of their width and flexibility. CIGS can be sprayed on everything from uniforms, to camouflage netting or the exteriors of tents.

“The program solves all of the underlying, physics-based equations allowing us to adjust parameters to give us an idea of why a cell is operating in a particular way,” explained Katzman.

According to Hernandez, it is the combination of student research being conducted by students like Katzman and Herendeen, mixed with engaging classroom discussions and academic development that make NPS such a powerful venue for educating naval officers.

“As a result of this continuing research engagement, NPS is able to develop viable curricula that will serve naval forces while directly supporting the strategic energy objectives of the Marine Corps,” said Hernandez.