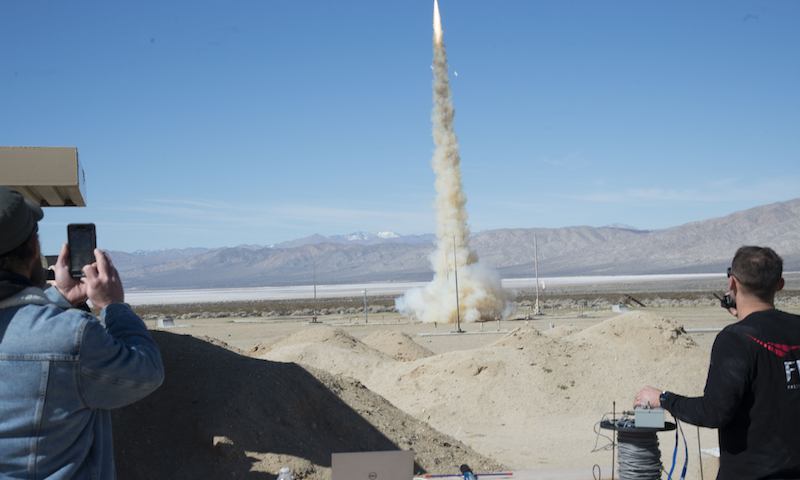 Randsburg, Calif. - When two Devil Dogs recently launched a rocket built from scratch over the barren wastes of the Mojave Desert, they took the expeditionary power of the United States Marine Corps to potential new heights.

Under the aegis of the Naval Postgraduate School (NPS) Space Systems Academic Group (SSAG), infantry officer Capt. Dillon Pierce and V-22 pilot Maj. John Pross teamed up to design and build a rocket capable of delivering a CubeSat relay device into near space as a way of rapidly providing over-the-horizon communications for maneuver units.

“They’re highly motivated, and that motivation is a really good example of how we encourage our students to think outside the box and apply what they do in the classroom out in the field,” said Dr. Wenschel Lan, SSAG faculty research associate who mentored Pross.

“[The rocket launch] went really well and they learned a lot; that’s always the most important thing,” she continued. “It’s moving towards that goal of being able to have students participate in a hands-on fashion to experience the whole mission lifecycle from the design concept all the way through launch and operations.”

The two Marines, drawing on their formidable operational experience, readily recognized a novel application for an emerging technology and toiled to make it a reality.

Versatile nanosatellites about the size of a softball, CubeSats were originally designed as space research devices accessible to the masses. Piggybacking on NASA rocket launches, the tiny boxes could be deployed en masse for a range of scientific experiments. Over the last decade, however, scientists have increasingly found them useful for other purposes.

“I stumbled into the SSAG small satellite lab one day and saw that the development of CubeSats and the new technologies that you can apply to their payloads was something they’re really interested in,” Pierce recalled. “I saw some tactical uses for this I wanted to try to operationalize: I figured high powered rocketry for these CubeSats would be a good venue to get them up [into space] a little bit faster.”

Predating the era of satellite communications, the U.S. military has a long history of using high altitude balloons for everything from observation to signals collection and weather analysis. Balloons represent a viable communications platform as well, to be sure ... Yet, they take time to float all the way up to where they needed to be.

That is time which can scarcely be afforded on today’s battlefield, especially for U.S. Marines increasingly called upon to conduct distributed operations over vast geographic areas. Satellite communications technologies have largely negated using balloons, but even satellites are subject to failure, whether from wear and tear, malfunction or hostile action.

“A satellite can go down for any number of reasons, but if it does, how does that platoon or distributed smaller element reach back and talk to their higher headquarters?” noted Pross. “So I had the idea of using a rocket to deliver a radio relay payload to do very short-term surgical comms for distributed units.”

Pierce and Pross, both Space Systems Operations graduate students, hashed out the concept over the course of their studies at NPS and Pross got to work on the payload by rigging CubeSats to act as specialized communications devices.

“If you deliver a payload to altitude, then the CubeSat can receive a VHF transmission – typical for a smaller unit – and then re-transmit UHF back to a ship or battalion [command post],” he explained.

Pierce, in turn, began fabricating the rocket. First, he had to learn how, so he started with directed studies under NPS faculty. Then he pursued a series of licenses and certifications, military and civilian, legally required to launch big rockets, ranging from civil aviation to explosives handling.

It took the duo nearly a year and, as completion loomed on the near horizon, they reached out to find a suitable place to launch their experimental rocket. The Friends of Amateur Rocketry (FAR) graciously agreed to host the launch.

Since 2003, the non-profit has served as the epicenter for rocketry enthusiasts, providing an infrastructure for testing and launching self-made rockets. Located in the heart of the Mojave Desert north of Edwards Air Force Base, FAR has been an ideal launch site for those who otherwise would not be able to engage in such costly experimentation, such as Girl Scouts, college teams, small research groups, families and now … Marine Corps graduate students from NPS.

“The opportunities FAR provides are invaluable for my thesis,” Pierce said. “I was able to get data points that you can’t otherwise get in a lab setting. Getting out there and actually testing the rocket in a real-world environment and getting that data for future analysis was incredibly beneficial.”

After launch, Pierce and Pross’ rocket soared approximately 2,000 feet up before reaching a state of “rapid disassembly” as the team coined it. In other words, it broke apart as it neared the threshold of the speed of sound. But, as Pross points out, the launch still provided the data they needed.

“That’s not exactly beyond line of sight [for over-the-horizon communications], but we were able to successfully demonstrate the idea as a proof of concept,” he noted. “Being able to work through the hardware and software integration, and all the challenges that come with that, allowed us to enhance learning beyond just what you might learn in a classroom.”

“We got our hands dirty; we broke things; we were able to actually produce a product,” Pross continued. “I think that really takes learning to the next level to be able to do that.”

The data from the rocket launch will not only serve as the basis for Pierce and Pross’ graduate theses, but will also lay the foundation for future research and development at NPS on what could be a great tool for expeditionary forces.

For these Marines, not even the sky is the limit.