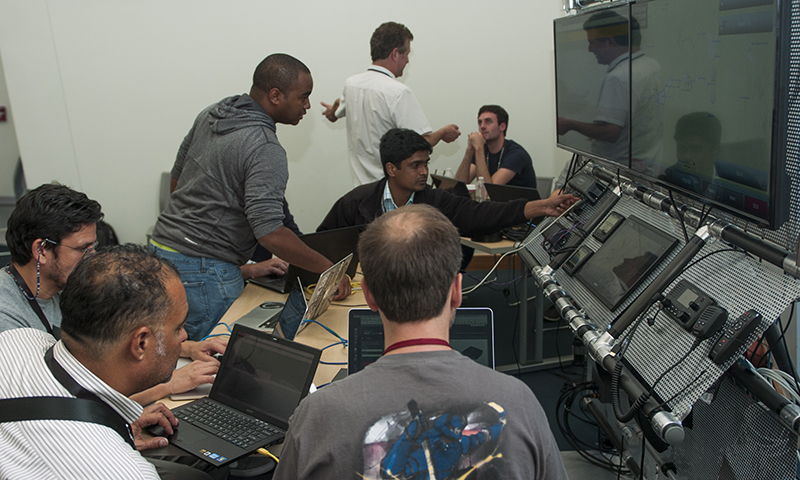 Innovators from across government, industry and academia participate in the third U.S. Navy sponsored “Hack the Machine” at the Massachusetts Institute of Technology (MIT) Computer Science and Artificial Intelligence Laboratory (CSAIL).

Ever since the dawn of the Internet and the dot-com boom of the 90s, almost every part of day-to-day life has dramatically changed. Where we once relied on paper maps and compasses, personal GPSs built into our phones take their place. We see retail stores quickly being replaced by online shopping, and everything from record keeping to personal communication now handled within the digital sphere.

With almost every other aspect of the world rapidly changing and adapting, no different is the U.S. Navy, as it looks to the future of cyber capabilities to accomplish its mission of maintaining, training and equipping combat ready naval forces capable of winning wars, deterring aggression, and maintaining freedom of the seas.

From September 22-24 in Boston, the Naval Postgraduate School (NPS) teamed up with partners from the Massachusetts Institute of Technology’s (MIT) Computer Science and Artificial Intelligence Laboratory (CSAIL), along with members of the technology industry such as Booz Allen Hamilton, Spark Cognition, Spigit and many others, to present Hack the Machine, a hands on digital experience to inspire top minds throughout industry and academia to bring innovation and ideas to the world of cybersecurity in the maritime domain.

“The biggest cyber threat that we have is our ability to generate capabilities, algorithms and code at a pace that matches organizations’, both nation states and others, ability to innovate attacks,” said Director of the NPS Center for Cyber Warfare and founder of Hack the Machine, Cmdr. Zac Staples. “If we build defenses and offenses in the same industrial model that we build ships and airplanes, which is a seven, eight, sometimes a 10-year development cycle, then we will lose the innovation battle every time. The way you get ahead is you get people excited to work on national security problems and that is what Hack the Machine does.”

Dubbed as the “Blue Angels for geeks,” Hack the Machine kicked off honoring the history of U.S. Navy technology aboard the world’s oldest commissioned warship, the USS Constitution. Following the kick off, the event took approximately 400 participants to the halls of MIT’s CSAIL for two days of collaboration and problem solving.

“This event saw members of government, academia, entrepreneurs, industry and innovators working together to think about maritime security in a very unique way,” said Deputy Chief of Naval Operations for Information Warfare and Director of Naval Intelligence, Vice Adm. Jan Tighe, as part of her closing remarks for the event.

Maritime cybersecurity is about is forging new paths for securing our operational technologies, Tighe noted in her remarks, all of which are critical to not only ships, aircraft and submarines, but also to the core functionality of the Navy itself.

“Almost everything I saw today from all of the teams throughout the event had direct applicability to helping the Navy accomplish its mission,” she added.

The event featured the perspectives from Navy, academic and industry cybersecurity experts during a variety of presentations offered to the diverse group of participants.

“The power of Hack the Machine is that it is not innovation theater, it’s people getting together and doing something different instead of just talking about it,” said Staples. “We aren’t working on fake problems this weekend. These are real word challenges in actual maritime hardware. We are using actual data sets from engine rooms all over the world, and we are tackling a problem on disaster relief that couldn’t be more timely than it is now.”

Participants were broken up into groups to cooperate on three distinct challenges that were referred to as tracks.

“One aspect of Hack the Machine that is a huge interest to me, is that it provides a system that is realistic enough to be an example of what it is like to hack into a cyber physical system, and for that matter, what it would be like to defend one,” said Principal Research Scientist at MIT CSAIL, Howard Shrobe.

“This represents a big opportunity to work with the operational side of this community,” he continued. “Often in scenarios like these, the operator knows what the problem is but not necessarily the solution. Having that real-world input is deeply beneficial to figuring out what the solutions look like, and to then bring those solutions into reality.”

The final day of the event saw the teams present their work to a panel of experts from multiple backgrounds to compete for three monetary prizes.

“Being able to work side by side with so many different members of academia and industry was a great experience that made us have to work even harder,” said Lt. Matthew Timmerman, part of a team known as “Navy 311,” first-place winners of track 3. “It feels great to have come in first place after working hard with one another for [so many] hours in a small room.”

The team’s project, which was known as Consolidated Augmented Common Operational Picture, was an augmented reality program displaying data on a globe that lets you select different tracks and manage information in order to assist in developing and presenting intelligence and operational briefings.

“I have been to hackathons before, but this was definitely the most collaborative and diverse that I have been too. It was great to be in an environment that had so many different inputs,” said Krishna Gadia, a software developer for Computer Associates Technologies, and fellow member of Navy 311. “Working with the Navy really helped in orienting us on how things function, and how we wanted to achieve different tasks. This was a great learning experience for me and I would definitely come again in the future.”

Hack the Machine, Boston represents the third iteration of the event, with previous events held in Austin, Texas and in San Francisco. The Navy has hosted these events at technological hubs, instead of military bases, in an effort to attract an emerging group of highly-skilled technology and software experts. According to Staples, the team has been successful.

“My goal is done!” Staples exclaimed. “Yesterday someone from one of the universities in Boston came up and told me he was a Ph.D. candidate who hasn’t selected his dissertation yet, and he was originally going to do something on a game-based environment.

“But the culmination of everything that has happened this month, with Harvey and Irma causing devastation across their paths, has left a sense of tragedy in his heart, and he looked at us and he saw a partner that would be interested in helping him do something meaningful,” Staples continued. “If that Ph.D. comes up with an idea that saves one person’s life because he chose to work on this, then I am already done. If that happens 100 times, then we have started to change the world.”