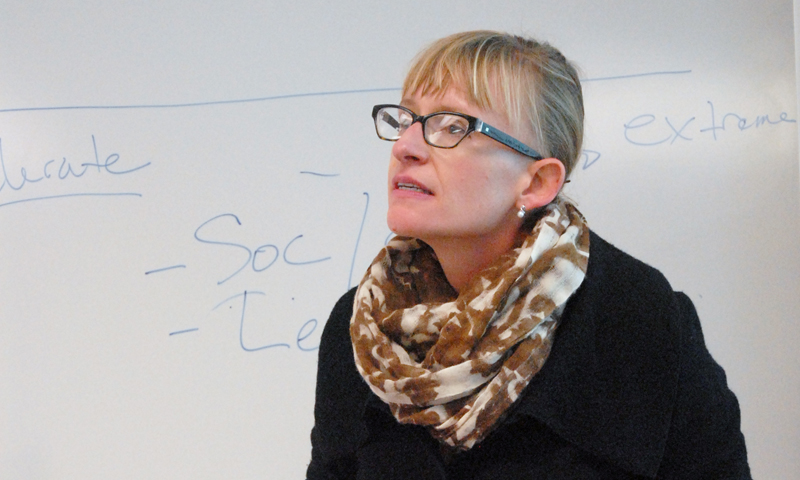 Naval Postgraduate School (NPS) Assistant Professor Heather Gregg, the author of, “The Path to Salvation: Religious Violence from the Crusades to Jihad” addresses a group of Moroccan border security officers at NPS-U.S. Department of State led course, in which Gregg discussed state responses to extremism.

U.S Ambassador Frank Urbancic, a regional attaché with the State Department’s non-proliferation office, recently traveled with a contingent of Moroccan border security professionals to the Naval Postgraduate School (NPS) for a two-week seminar dedicated to, amongst other things, state responses to extremism and religiously motivated violence.

“This is the first time that the Sate Department’s non-proliferation office has brought a group of Moroccan border security officials to NPS; our expectations have been exceeded and the instruction has been excellent,” said Urbancic.

“The course was tailored made for their requirements and fully met every need that they had, the experience has left them with a massively positive image of the U.S. and its people,” continued Urbancic.

The seminar was part of a land-based border security course led by NPS Assistant Professor Heather Gregg. Gregg, the author of, “The Path to Salvation: Religious Violence from the Crusades to Jihad,” is no stranger to questions of faith and violence.

“I became interested in religiously motivated violence after studying the civil war in Bosnia and working for a [non-governmental organization] NGO in Croatia during the tail end of the conflict,” said Gregg.

“I believe that religion is a powerful tool for good, but it can also be used to motivate intolerance and violence. My research focuses on understanding the conditions under which religious groups feel they need to use violence to defend their faith,” continued Gregg. “I am also very interested in understanding how to fight these groups in a way that does not validate their defensive or apocalyptic claims.”

While the course’s broader objectives were to help North Africans think about the various types of traditional and non-traditional threats to border security, of which extremism is but a single issue, significant attention was given to understanding and revealing extremist networks and state responses to their activities.

“We can agree that the goal of the state is to undermine the extremist message, it’s an easy goal to agree to, but it is very difficult to implement,” said Gregg.

“Most states immediately resort to suppression strategies, but they are hard to conduct successfully,” continued Gregg.  “Attacks serve to confirm the message of the group.”

“Attacks strengthen the perception that the state is the aggressor - we cannot change an ideology through force,” said Driouich.

Still, Gregg insists that “talk is cheap” and that something must be done.

“It's not enough for the state to just dialogue, there are actions that are also necessary,” said Gregg.

According to Gregg, an appropriate response should combine a series of initiatives that address security, the underlying causes of extremism, social engagement and state provided spaces where ideas can be fought with ideas.

“’Talk is cheap,’ but it is important. The question is, ‘who should be speaking?’ Often the state does not have the religious credibility to dialogue, therefore the state should create a space, like the space created by the Qatari government during the recent Doha Debates, where issues can be discussed,” said Gregg.

Members of the Moroccan contingent were keen to point out their nation’s anti-extremism programs. With visible excitement, and at times applause, they proceeded to describe the efforts that their government, led by His Highness King Mohammad VI, has taken in order to combat extremism.

“King Mohammed VI implemented a series of initiatives including ‘proximity politics’… the changes that he led were in response to the Casa Blanca bombings and were based on the notion of facing ideology with ideology,” said Driouich.

“Morocco is working to foster moderate Islam under the tutelage of the king who has taken on the mantle of “Emir al-Momineen” [Commander of the Faithful],” Driouich continued. 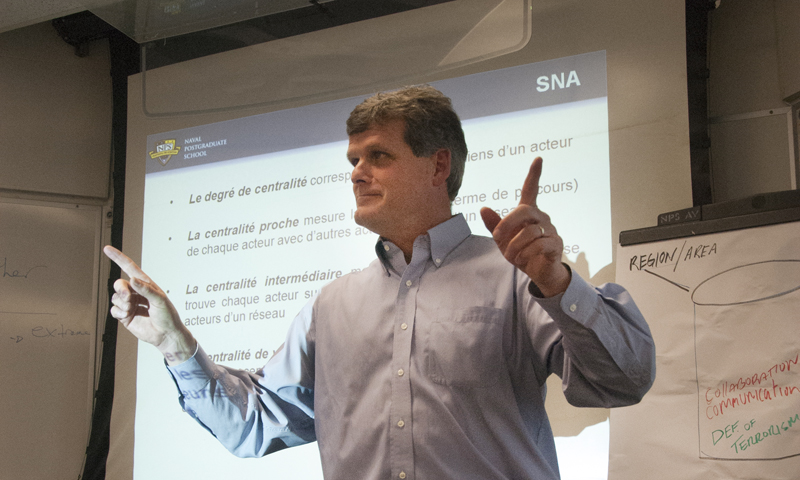 Gregg invited NPS Defense Analysis Associate Professor Glenn Robinson and Assistant Professor Sean Everton to share their perspectives as well. Robinson is a Middle East specialist and Everton is a Social Network Analysis expert and the author of, “Disrupting Dark Networks,” a first-of-its-kind book dedicated to an NPS developed intelligence methodology that is being used to illuminate clandestine organizations.

Robinson helped seminar attendees to differentiate between reformers and revolutionaries, paying particular attention to Islamist revolutionaries and their goals and tactics.

“We have to make a distinction between reformers and revolutionaries who want to take direct action against the state and control from the top down,” said Robinson.

Robinson also helped to dispel the image of the uneducated, mindless jihadist and revealed that many Islamist are far more sophisticated than is generally assumed.

“Despite popular assumptions to the contrary, many Islamists are well educated, urban, middle class professionals and are neither peasants nor high clergy,” said Robinson.

Of interest to the visiting Moroccan contingent was the possibility that Islamist reformers could abandon peaceful reform efforts and adopt violent means to achieve their aims.

According to Robinson, groups like the Muslim Brotherhood, which abandoned violence decades ago, could return to violence due to repression, the imprisonment of group members and due to actions like the recent coup that removed Muslim Brotherhood member and former Egyptian President Mohammad Morsi from power.

Still, Robinson insists that despite the damage that jihadist have done in the U.S. and abroad, their ability to severely threaten the West is negligible.

“Jihadis can kill, but they do not represent a strategic threat to the U.S,” said Robinson.

Strategic threat or not, Everton spoke at length with seminar attendees about Social Network Analysis (SNA), and his efforts to use it to help intelligence professionals illuminate extremists networks.

“Most types of analysis focus on people’s characteristics, their gender, race or level of education, but the problem with this approach is that our characteristics do not change from one context to another,” said Everton.

“Because our characteristics do not change from one context to the other, you cannot look to them to understand the network in which they exist, what changes is their social context, hence the need to look at social network analysis,” continued Everton.

The Moroccan contingent, armed with an NPS tailored tool kit designed to counter radicalism and enhance border security programs, said farewell to NPS and the Monterey Peninsula. But prior to returning home they had on more stop to make, the U.S. border between San Diego and Tijuana, Mexico, where they saw first hand how U.S. officials conduct border security operations.