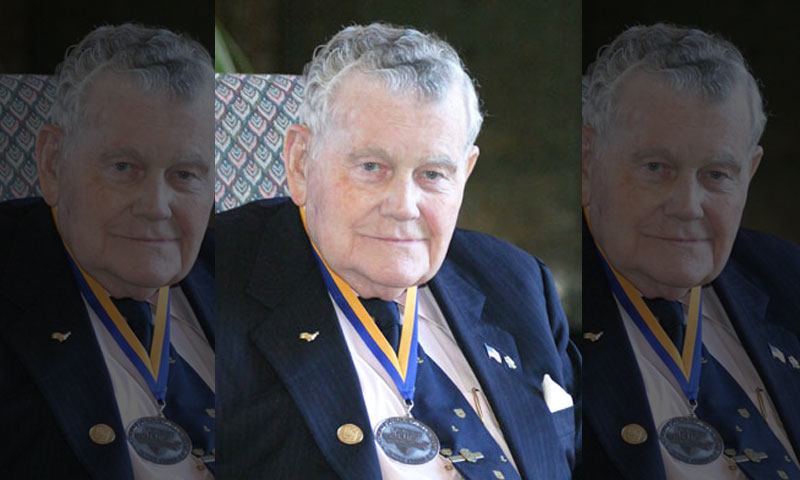 The Naval Postgraduate School mourned the passing of one of its greatest Hall of Fame Alumni, “Father of the Aegis” Rear Admiral Wayne E. Meyer, Sept. 1.

The Naval Postgraduate School mourned the passing of one of its greatest Hall of Fame Alumni, “Father of the Aegis” Rear Admiral Wayne E. Meyer, Sept. 1.

The Aegis is the Navy’s primary ship air-defense weapon system that revolutionized how it performs air defense.  As founding manager of the Aegis Shipbuilding Project, Meyer was responsible for the construction of all of the Navy's current ballistic-missile defense cruisers and destroyers – 89 ships built or in construction with more in planning – one of the largest and longest shipbuilding programs in naval history.

"I am deeply saddened by a great loss to our Navy family," Chief of Naval Operations Adm. Gary Roughead said in hearing of Meyer’s passing.  "Rear Admiral Meyer's passion, technical acumen and warfighting expertise serve as the foundation of our Navy combatant fleet today.  His legacy will remain in the Navy forever."

Indeed, had e lived but another two weeks, Meyer would have witnessed the world-historic announcement by President Obama of his new missile defense system for Europe whose very heart is the Aegis.  On Sept. 17, the President said the initial stage of his new sea-based plan would use Aegis ships armed with interceptors stationed near Europe, and ten days later Vice Chairman of the Joint Chiefs of Staff Marine Corps Gen. James Cartwright confirmed the Navy was studying a plan to use up to six Aegis-armed vessels as the foundation of the system.

“In addition to being the ‘Father of the Aegis,’ Wayne Meyer was also an intellectual of great force and a strong supporter of graduate education for Naval officers,” said NPS President Daniel Oliver.  “We are all very proud to have his name on our Wayne E. Meyer Institute of Systems Engineering and to have him as a member of the NPS Hall of Fame.”

“Admiral Meyer was keenly interested in the role the Naval Postgraduate School has played and continues to play in the technical education of our young naval officers,” said Meyer Institute Director retired Rear Adm. Paul Shebalin.  “He felt strongly that by understanding the underlying science and engineering, NPS-educated officers could make a real difference in the design, acquisition, maintenance and operation of effective Naval warfare systems.”  Shebalin formerly served as Deputy Director of the Navy Staff; Deputy Commander for Mobilization, Naval Sea Systems Command and Naval Warfare Systems Command; and Senior Engineering Duty Officer for the Navy Reserve.

"A great part of Admiral Meyer's legacy was inculcating an enduring tradition of systems engineering at the Naval Postgraduate School,” recalled NPS Vice President and Dean of Research Karl van Bibber.  “My hope is that, from among the ranks of our students today – many of whose research is affiliated with his namesake Meyer Institute – will arise visionaries like Wayne E. Meyer who will effect similar transformational changes for our future naval systems."

"Wayne Meyer was a model of effective warship and system design for us all to emulate,” agreed NPS Senior Lecturer and renowned naval warfare expert Wayne Hughes.  “He recognized the value of the Naval Postgraduate School in preparing both our sea-going officers and engineering duty community officers for service in what he saw as ‘his’ Navy."

After the ceremony inducting him into the NPS Hall of Fame on Feb. 23, 2006, Meyer did a videotaped interview in which he looked back on his time at the Naval Postgraduate School and its importance for his career.

“There’s no doubt in my mind that NPS helped shape me a lot,” Meyer told this writer.  “The Navy needs to create and nurture its intellectual capital, and that’s exactly the purpose of the [Wayne E. Meyer] Institute here at NPS.”

As part of a distinguished naval career, in 1970 the Navy chose then Capt. Meyer to lead the development of the new Aegis Weapon System at the Naval Ordnance Systems Command.  In Jan. 1975, he was promoted to rear admiral and in two years assumed duties as founding project manager of the Aegis Shipbuilding Project.

In 1977, Meyer was designated a Pioneer in the Navy’s Acquisition Hall of Fame at the Pentagon.  In 2008, he was the recipient of the sixth annual Ronald W. Reagan Missile Defense Award.

But the ultimate honor was to have a ship of “his” Navy named after him.

In Nov. 2006, the Secretary of the Navy announced that DDG 108, an Arleigh Burke class destroyer, would bear his name.  Christened last Oct. 18,it utilizes the same Aegis combat system he had shepherded through development, including a SPY-lD multifunction phased array radar.  When the ship is commissioned on Oct. 10 in Philadelphia, the Navy will gain a proud, state-of-the-art, multi-mission warship capable of leading the Navy into the future.

Meyer will be on board in spirit.  Were he able to be there in the flesh, he would surely repeat what he said at the christening: “This is one of the proudest moments in my life.  You can do whatever you want to with this ship, but remember – I’m still alive!”

Indeed, Rear Adm. Wayne E. Meyer’s legacy – not just to the nation, the Navy or the Naval Postgraduate School, but to the world – lives on.