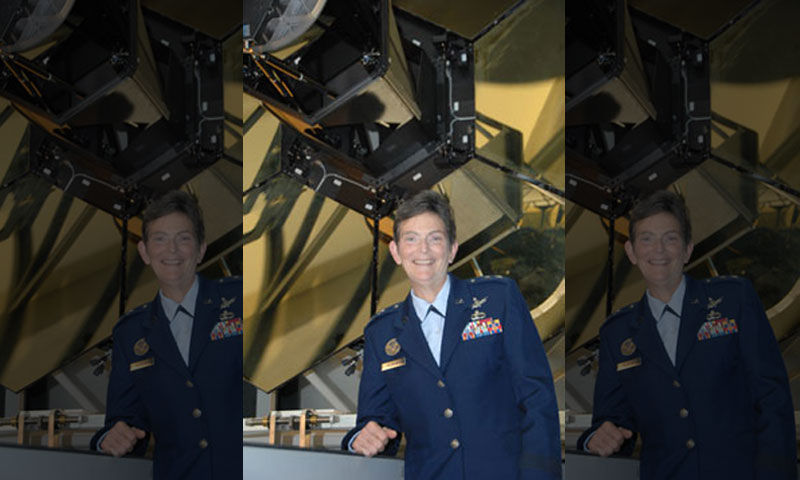 The Naval Postgraduate School is the proud new home for the Segmented Mirror Space Telescope (SMT), designed and developed for the National Reconnaissance Office (NRO) as a technical demonstrator and experimental testbed for cutting-edge space imaging technologies.

The Jan. 12 ribbon cutting for the 10-foot telescope, whose hexagonal mirrors unfold like the petals of a giant flower upon reaching orbit, was attended by Naval Postgraduate School and National Reconnaissance Office leadership, including NRO Deputy Director and Commander of the Air Force Space Command Element Maj. Gen. Ellen Pawlikowski, as well as senior representatives from the aerospace industry, national laboratories and other academic institutions.

Pawlikowski keynoted a series of briefings on the technical aspects of the telescope, whose six lightweight mirror segments each have more than 100 actuators for surface control as well as three fine and six coarse actuators to bring the segments into alignment after deployment; the system’s history of acquisition by NPS; and plans for its use in teaching and research prior to the unveiling.

“It’s a thrill to welcome the Telescope here to NPS, which is the ideal place, as you’re our future generation of space scientists and engineers,” Pawlikowski told the audience of Space Systems Engineering and Space Systems Operations students in Mechanical Engineering Auditorium. “NPS is the heart and soul of what it’s all about – having science and technology research and education all in one place.

“At NRO, we look to the Naval Postgraduate School to help us develop new technologies and integrate them in new ways to meet our ever-changing mission,” said Pawlikowski, “and to develop more flexible space systems that give us the ability to adapt after launch and develop them in months and not years, so we don’t launch already obsolete technology. This telescope being here represents the next phase of your helping us to become more flexible. It’s a great accomplishment to successfully move something of this scale and complexity all the way across the country. I congratulate you all on a great success.”

“The Segmented Mirror Telescope is a national treasure and the crown jewel of the Spacecraft Research and Design Center that will give our faculty and students unique and unprecedented experience in the design, analysis and testing of the most advanced space systems,” said SRDC Director and MAE Distinguished Prof. Brij Agrawal who oversaw the four-year effort that brought the high-tech system 3,000 miles from Rochester, N.Y. to Monterey, Calif.

“This was a huge project that required many highly skilled people from NPS, NRO and ITT [International Telephone and Telegraph] coming together and working like clockwork to make it happen,” Agrawal noted. “We couldn’t have done it without every one of them, especially [NRO SMT Program Manager] Lt. Col. Andy Adams, whose vision it was to have the system go to an academic research institution; Tom Aquilina from ITT, which built the telescope for NRO and dedicated four engineers to getting it safely here; Dr. Ty Martinez from the Naval Research Laboratory, our close partner in the project; and Michael Heilpern of the Monterey [Calif.] Jet Center where the C-17 transport plane touched down on Dec. 18 carrying the telescope and 25 additional boxes that were unloaded by fork lift and driven to NPS in two long trucks.”

“It took hardheadedness and a lot of perseverance to get the telescope to the Naval Postgraduate School,” Adams said. “It was very important that it not get boxed up and left to gather dust in a warehouse some where, but be where S&T [science and technology] faculty and students can really use it for education and research. We looked at all the places where it could go, and decided NPS was the ideal place for research on the military applications of adaptive optics over the next 10 to 20 years.”

“It was Andy Adams who had the vision that this should go to an educational research institution,” Agrawal confirmed. “And it was [NRO’s] Dr. Phil Howerton, founding manager of the Segmented Mirror Demonstrator Program, the forerunner of Andy’s SMT Program, who allowed us to participate and really got us involved.

“At NPS, the person who really made this happen was Provost [and Executive Vice President Leonard] Ferrari,” Agrawal noted. “He said, ‘Go for it. I’ll give you the money -- just make it happen.’ And all along we had really strong support from NPS [Vice President and] Dean of Research Karl van Bibber; [then] Acting Dean of the Graduate School of Engineering and Applied Sciences Capt. Dan Burns; and Chairman of the MAE Department Professor Knox Millsaps.”

“These are exciting times at the Naval Postgraduate School,” Ferrari told the Space Systems students and VIP attendees at the briefing before the ribbon cutting. “Today, the National Reconnaissance Office is placing the most advanced and innovative of tools in the hands of military students who have come from, and will be returning to, operational assignments. This is an outstanding opportunity for NPS and the nation. This kind of facility takes the Naval Postgraduate School to a whole new level in the breadth and scope of research that can happen here, and collaboration with the rest of DoD and the entire defense and national security community. It’s a really great time in our history, and it makes for a great 100th birthday present for the school.”

“I want to extend my personal congratulations to Brij Agrawal and his entire team,” Ferarri closed. “Brij is the one without whom none of this would have happened.”

“It’s hard to overstate what this means for the Mechanical and Aerospace Department, and for the Naval Postgraduate School and the nation,” agreed Millsaps. “The new SMT lab facility is one-of-a-kind – absolutely unique.”

Following the telescope viewing, participants gathered down the hall from the “dark tent” – the black-painted chamber that houses it – for the cutting of a ceremonial cake decorated with a “space telescope” whose “mirrors” were thin slices of kiwi fruit.

“Now, that takes the cake,” said Pawlikowski, who told the Space Systems students she’d been surprised with a cake shaped like a turbo pump on her birthday in 2000 when she headed the Air Force’s Airborne Laser Program. Pawlikowski takes the reigns as Commander, Air Force Research Laboratory, Air Force Materiel Command, at Wright Patterson Air Force Base on Feb. 12.

In the afternoon, Agrawal led a tour of the multi-disciplinary Spacecraft Research and Design Center Laboratory and hosted a meeting of attendees to discuss SMT uses and potential areas for future collaboration. In addition to NPS and NRO, participants included senior representatives from the aerospace industry, national laboratories and other academic institutions, including ITT, Lawrence Livermore National Laboratory, Lockheed-Martin and Northrup Grumman Corporations, the Naval Research Laboratory, NASA’s Jet Propulsion Laboratory, and the University of California at Santa Cruz. The group formed an advisory committee charged with recommending areas of academic and research collaboration.

“This opens up a huge potential for collaborative research and educational ventures with other academic institutions, the national labs and the aerospace industry,” Agrawal said.

The Segmented Mirror Telescope is housed in Halligan Hall and will be used for instruction and experimental research by the NPS Space Systems Engineering and Space Systems Operations curricula. 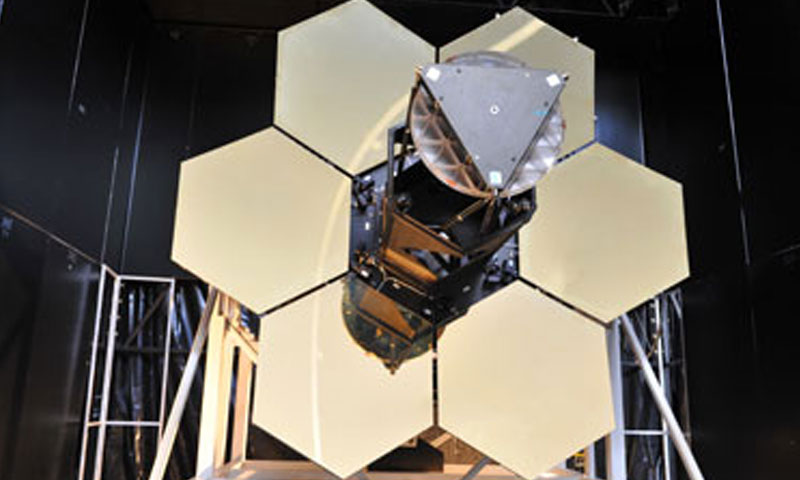 The National Reconnaissance Office’s Segmented Mirror Space Telescope – a state-of-the-art experimental testbed for space-imaging education and research, was officially received by its new home, the Naval Postgraduate School’s Spacecraft Research and Design Center, Jan. 12. The lightweight segmented-mirror telescope represents a quantum leap in the research and educational capabilities of the NPS Spacecraft Research and Design Center.

“It was the possibility of having the SMT here at NPS that really motivated us to go into adaptive optics,” Agrawal said. “Even before its arrival, three of my students have already completed their Ph.D. dissertations and master’s theses associated with it: Air Force Capt. Matt Allen, whose research focused on adaptive control; Air Force Maj. Dan Burtz, who catalogued the SMT’s technical characteristics and used model reduction techniques to synthesize an H-infinity controller for the system; and Lt. Mike Looysen, who worked on combined H-infinity and classical control models for the telescope. This is also a fantastic opportunity for the NRO students who are being pipelined through NPS, to keep the brain power in the system – to be able to develop their expertise and send them back to NRO to continue their careers in this specialized field.”

“Having the SMT here at NPS is a great opportunity to expose the next S&T generation that comes to NRO to the future technology they need to know,” agreed NRO’s Howerton. “The paramount technology is the active control system, and it’s a great achievement having this testbed capability at NPS.”

“It’s bitter sweet to see it go,” Howerton added. “The SMD [Segmented Mirror Demonstrator] represents three years of my life, but I’m happy it’s going to a great learning institution. There’s a real synergy between the Naval Postgraduate School and NRO, with the number of students who graduate from here who come work with us. I want to seed and speed the ideas of change by having them learn this technology while they’re at NPS.”

The day after the ribbon cutting, Agrawal looked back on the ceremony and the four years of hard work that led up to it.

“It took so long to reach this point, but it went far beyond my expectations,” he said. “We have strong DoD support and received great support from NRO’s Major General Pawlikowski, who is a very senior person. And the whole community is interested in future collaboration, including the founder of the field, Professor Claire Max, Director of the Center for Adaptive Optics at the University of California at Santa Cruz, who attended the entire day’s events.”

Adaptive optics, Agrawal’s area of expertise, has numerous civilian and military applications, including the imaging of stars, galaxies and terrestrial features with space- and ground-based telescopes, and viewing the retina through the non-homogeneous fluids of the eye. NASA’s James Webb Space Telescope, named for the former NASA administrator and scheduled for launch in 2014, will deploy the next generation of SMT technology on a mission to image light from the earliest galaxies in the universe.

Like the Webb telescope, the SMT employs a large, lightweight deployable mirror system to increase optical resolution on-orbit while reducing telescope weight. The mirror segments of such telescopes collapse into a small volume to fit into their launch vehicles and then open to their full diameter in response to a wireless command after launch. The segments must be very accurately aligned after deployment, and their surfaces must be actively controlled using hundreds of tiny actuators. Adaptive optics systems work by measuring the distortion in an image and using “adaptive” optical elements – usually deformable mirrors – to restore the image by applying an opposite, cancelling distortion.

The National Reconnaissance Office – the nation’s “eyes and ears” in space – is responsible for designing, building and operating U.S. reconnaissance satellites that can warn of trouble spots around the world, help plan military operations and monitor the global environment.