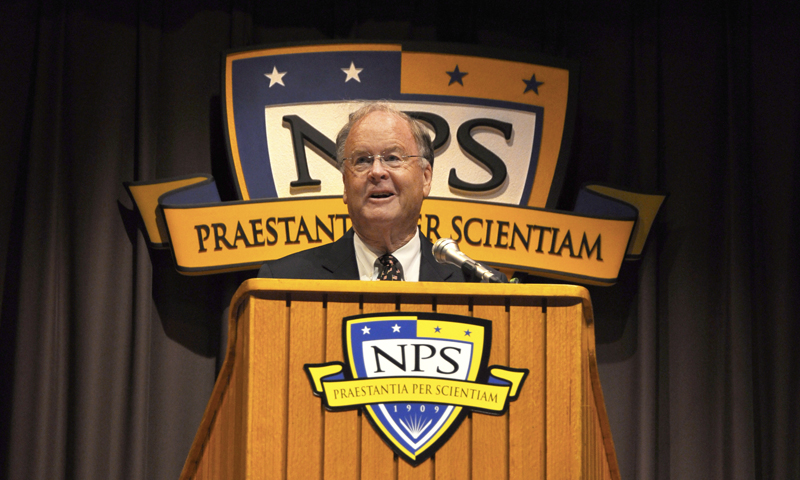 Local Congressman Sam Farr, a long-time NPS supporter and advocate, addresses 400 graduating NPS students as well as family, faculty and staff members assembled in King Auditorium during NPS’ Summer Quarter Graduation Ceremony, Sept. 26. Some 407 graduate degrees were awarded to the 400 graduating students representing all branches of the U.S. military as well as select Department of Defense civilians, international officers and first responders from across the nation.

The Naval Postgraduate School’s latest class of new alumni celebrated the culmination of their studies, Sept. 26, during the university’s quarterly graduation ceremony in King Auditorium. The 400-strong Summer Quarter 2014 graduating class included members of the Navy, Marine Corps, Army and Air Force as well as some 163 DOD civilians, first responders and 35 international officers.

“To the graduates here today, words cannot express our immense pride in you! We have immersed you in an extremely competitive academic environment that has enabled you to focus and think about the challenges that affect your service and our national security,” said Route.

“It is our commitment that your NPS education will serve as your foundation upon which the rest of your careers are built. The skills you have developed will help you to serve more effectively wherever you are called, and our nation will count on you as strategic 'influencers' wherever your careers take you. We know each of you will make a difference,” Route continued.

Route also thanked the families in attendance, noting that it was their love, support and sacrifice that helped the graduates to get to where they are today.

U.S. Congressman Sam Farr served as the ceremony's keynote speaker. He has represented California's 20th District for two decades, and is a long-time NPS supporter and advocate.

Farr also discussed the relationship between national security and the economic, diplomatic, cultural and defense “tools” that NPS inculcates within its students.

“NPS is where you graduates come to foster the cutting-edge thinking on how to best utilize these national security tools to keep our country safe,” said Farr. “Simply put, the future of our nation is now in your hands.”