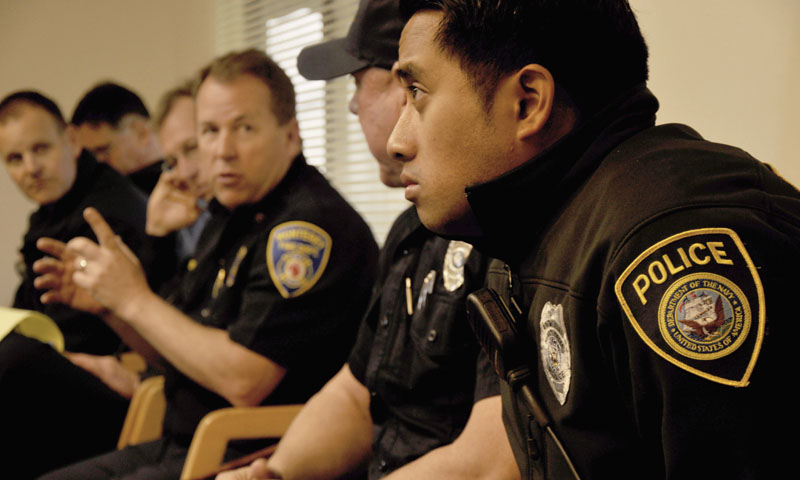 "I think these exercises are great training for all of us," said NSA Monterey Commanding Officer Capt. Gerral David. "We realize that we have a lot of response capability, it just takes training for us to get it right."

"Active shooter training is extremely important," said Officer Samantha Sanders of the Presidio of Monterey Police Department, "especially because we get to work with NPS’ Police Department closely, allowing us to communicate and coordinate tactics."

"We coordinated our objectives well," said City of Monterey Fire Department Division Chief Stewart Roth. "We were able to operate as a unified command team between myself, the military, and the police captains … Being unified allows us to get better and better, because we are familiarizing ourselves with each other and this with this potential scenario."

The active shooter scenario entailed a disgruntled gunman who open fire at La Mesa’s Fleet and Family Support Center, portrayed by an active duty Chief Navy SEAL in the scenario.

"The [Navy] SEAL as the active shooter made it more realistic," said NSA Monterey Police Officer Anthony Atofau. "This kind of training has opened our eyes to how this situation could unfold in real world conditions because we never know where the threat is coming from."

Sanders and Atofau were two of the first officers to arrive on scene. Atofau's team was the first to engage the active shooter and fell to simulated gunfire while Sanders' team was able to take down the shooter.

"I think we did really well, especially this being our first joint operation with NPS," said Sanders. "But there is room for improvement. I thought logistics and tactics-wise, we could have been tighter.

“Its critical to be able to trust them [NSA Monterey Police] to stack and clear rooms,” Sanders continued. “I think this training helps us save lives in the long run because the more we train the better police force we can be.”

The success of the exercise has given birth to future joint training opportunities for all of the services involved.

“This exercise is a great start because we were able to identify where potential hitches will be and now it’s up to us to fix them,” said Presidio of Monterey Garrison Commander Col. Paul W. Fellinger.

"The interoperability between Naval Support Activity Monterey and the City of Monterey is invaluable," he continued. "If we are not training together, when a real event like this happens, we will be extremely challenged to save lives."