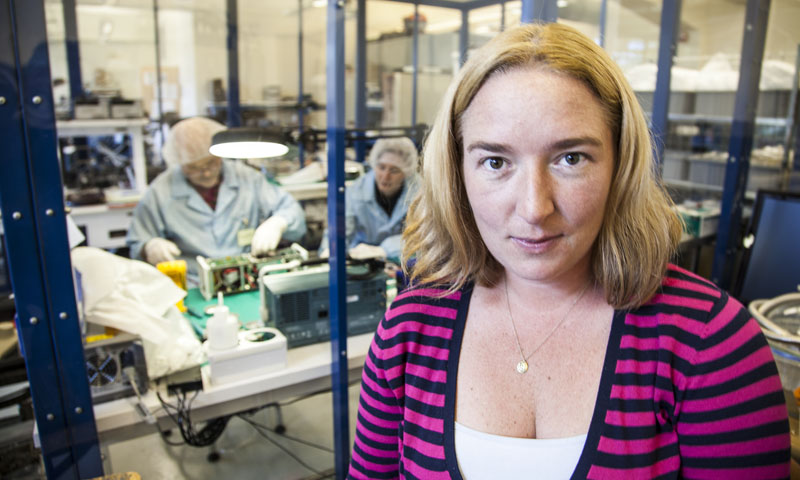 NPS Research Assistant Professor of Operations Research, Dr. Emily Craparo, took part in a 2003 NASA summer program as a doctoral student at MIT. Ten years after her team developed their Mars Geophysical Lander mission, they looked back on how closely their proposal resembles the upcoming 2016 NASA InSight mission to Mars.

There is arguably nothing more valuable to graduate studies than hands-on applied research. The opportunity to see how classroom concepts and theories are applied to real-world scenarios helps graduate students prepare to be practitioners in their fields.

For Naval Postgraduate School Research Assistant Professor of Operations Research, Dr. Emily Craparo, that opportunity came in the summer of 2003 when, as a doctoral student at the Massachusetts Institute of Technology (MIT), she was selected to take part in the Planetary Science Summer School (PSSS) at NASA’s Jet Propulsion Laboratory (JPL).

As part of a team of 18 graduate students and postdoctoral scholars, Craparo had the chance to work closely with NASA scientists and peers from across disciplines on the development of a Mars Lander Mission plan.

“[The Mars Geophysical Lander] is aimed at studying the martian interior in search of past habitability and future exploration support,” wrote Craparo’s PSSS team in a follow-up report on their work. “During an intensive week in summer 2003, the PSSS team developed the Mars Geophysical Lander mission concept and gained valuable interdisciplinary skills in mission design.”

The PSSS program, now in its 25th year, is aimed at exposing top young scholars to the kind of real-world work being done by NASA scientists daily at JPL and other research centers around the country. Craparo’s PSSS group would certainly apply to real-world research, and were invited to present efforts given the similarities between their Mars Geophysical Lander (MGL) mission proposal and the existing NASA InSight [Interior Exploration using Seismic Investigations, Geodesy and Heat Transport] mission, slated for launch in 2016.

“The unique strength of the PSSS is the way the students are integrated directly into the JPL mission development process, working with exactly the same engineers and processes that are used every other week of the year to develop mission ideas into implementable concepts, including InSight some years later,” said Banerdt. “The eerie similarity of the 2003 mission concept to the current InSight mission demonstrates just how closely the PSSS simulates the actual planetary mission development process, giving students invaluable experience in turning science ideas into practical missions.”

“The intent of the PSSS is to help prepare the students for leadership positions in planetary exploration by giving them an in-depth experience in developing an early mission concept study,” added NASA JPL’s Anita Sohus. “We want them to understand the interdisciplinary nature of exploration, the lifecycle of missions, the importance of teamwork, and to develop habits of mind through experiencing the concurrent engineering process.”

Craparo was responsible for overseeing the MGL attitude control system portion of the project, which utilized her academic background in aeronautics and astronautics from MIT. The experience of working in the interdisciplinary PSSS group was not unlike working in academia, she said, noting the value of hearing different perspectives on a single issue, and a associated balance in taking an idea from concept to reality.

“Our PSSS group consisted of engineers and scientists. I was an engineer, and I focused on how to make things happen,” Craparo said. “The scientists were more focused on what they would want to measure once they were on Mars, and they didn’t really know how we were going to get there and make it happen. It was an interesting experience just learning to communicate with someone with a different background, and being able to compromise.”

One PSSS concept Craparo wishes that InSight or a future Mars mission would include is … Lawn darts, or the scientific equivalent, which the PSSS team called “geodarts.”

“Geodarts are basically a series of seismic sensors that we designed our spacecraft to deploy as it was coming down,” she explained. “As it’s coming down it shoots out these lawn dart-type devices, which we later detonate to measure geological properties.”

Following her summer at NASA, Craparo developed an interest in optimization, which ultimately brought her to NPS as a postdoctoral fellow with the National Research Council in 2009. With a background in aeronautics and astronautics, she appreciated the flexibility to enter the field that most fit her interests.

“Aeronautics and astronautics is a really broad field. There is a lot that goes into building a sophisticated spacecraft or a sophisticated aircraft. It’s not just aerodynamics and propulsion and other the classical subjects,” said Craparo. “It also includes software design and the development of decision algorithms for autonomous systems. The optimization part of that work really appeals to me.  And that ties in to operations research, which is, more broadly, the science of making good decisions.

“Operations research gives NPS students the tools they need to analyze alternatives quantitatively, and optimization specifically is about finding the best decision that meets a number of constraints that are expressed mathematically,” she added. “And depending on the nature of those constraints and the nature of how you evaluate your different options, there are a lot of different techniques out there for figuring out what the best decision is.”

As NASA’s annual weeklong PSSS program marks its 25th anniversary, Craparo fondly recalls the opportunity to take part in the prestigious collaborative research program. The fact that the InSight mission so closely resembles the mission proposed by her group of students makes the summer of 2003 that much more memorable for the team.

“I think its neat that a group of students came up with this mission that was so similar in so many ways to what ended up being a real mission,” Craparo said. “The science objectives, the technology and logistics … and even the cost. It is pretty amazing how realistic a scenario a bunch of Ph.D. students and postdocs can put together in a week.”