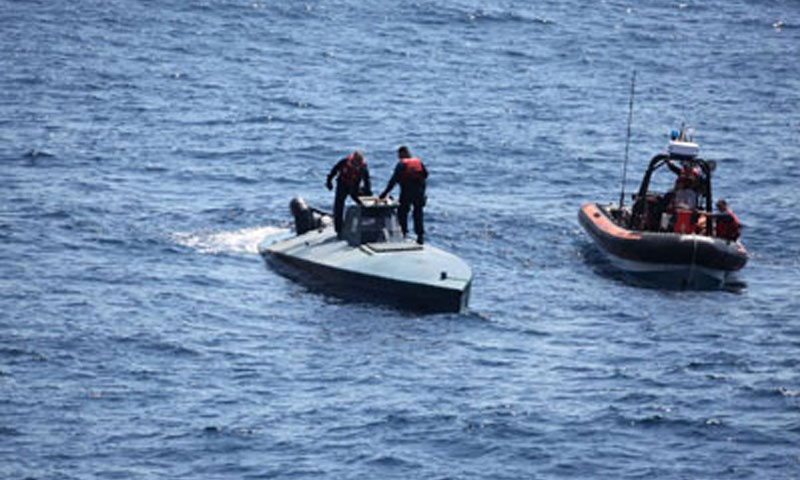 Crewmembers from the U.S. Coast Guard Cutter Jarvis board and inspect a Self-Propelled Semi-Submersible (SPSS) during an intercept and seizure off the coast of Central America on Oct. 21, 2009. It is estimated that nearly 75 percent of all cocaine entering the United States is transported by similar SPSS crafts. U.S. Coast Guard Photo by Al Haraf.

A Naval Postgraduate School faculty-student team has developed a mathematical model that determines the best combination and deployment of search platforms to detect and classify self-propelled semi-submersible (SPSS) mini-subs that are estimated to carry up to 75 percent of all Colombian cocaine destined for the United States.

“These stealthy little devils can carry tons of cocaine and are very hard to find because they have low visual, acoustic, radar and infrared signatures,” said Operations Research (OR) Distinguished Professor Gerald Brown. “They also carry the maritime equivalent of fuzz busters, so all the usual means we use to detect enemy craft don’t work well. But we’ve solved the problem.”

Brown is referring to his research group’s defender-attacker models that are changing the way the Departments of Defense and Homeland Security think about defending against narco smugglers, and terrorists. “Terrorists because semi-submersibles that can be used to smuggle cocaine into the country could also be used to smuggle WMD,” Brown explained.

“These are million-dollar, single-use disposable craft that are only 25 to 35 feet long, manned by as few as one person and are manufactured in the Colombian rainforest using quiet fishing vessel diesel engines,” Brown noted. “So the one parallel we have [to hunting them] is the ASW mission of finding quiet diesel submarines, which one of my students – naval flight officer Cmdr. Daniel “Barney” Pfeiff – did in his S-3 Viking before coming to NPS.”

“Each of the types of search platforms – such as maritime patrol aircraft, airborne early warning aircraft, submarines and frigates, or the proposed SeaWeb autonomous network of acoustic sensors – has its advantages and disadvantages, and will be geographically dispersed and limited in availability,” Brown said. “In the research for his master’s thesis, Commander Pfeiff developed an optimization model which comes up with the ideal cooperative layout of all available search platforms to maximize the probability of finding and classifying these guys.”

“The model assumes the semi-submersible attackers are intelligent and have some knowledge – the number and type of defenders they have to avoid – but don’t know where they are,” Brown noted. “Running scenarios for the Eastern Pacific and the Caribbean using five types of search platforms where the attacker has to choose a transit path and the defender has to determine the best use of search platforms to detect and classify SPSSs, we come up with a consistent optimal plan for defenders: use a mixed [probabilistic] strategy to shape the attackers’ routes by positioning search assets to force the vessels into chokepoints where they are more easily spotted, identified and interdicted.”

“Finding a semi-submersible is like finding a needle in a haystack, except the ‘haystack’ is the vast area of Big Ocean,” said Pfeiff. “And even when you’ve detected one, they’re hard to classify because they look similar to a sailboat on radar, sound like a fishing boat on acoustic sensors, and blend in with legitimate shipping traffic.”

“Faculty-student synergy like that brought by Commander Pfeiff is absolutely unique to the Naval Postgraduate School,” Brown stressed. “This is the only university in the world where bi-level defender-attacker optimization is a standard part of the curriculum to which students bring fresh operational experience directly relevant to real world challenges, and where faculty are doing advanced research that’s immediately applicable.” 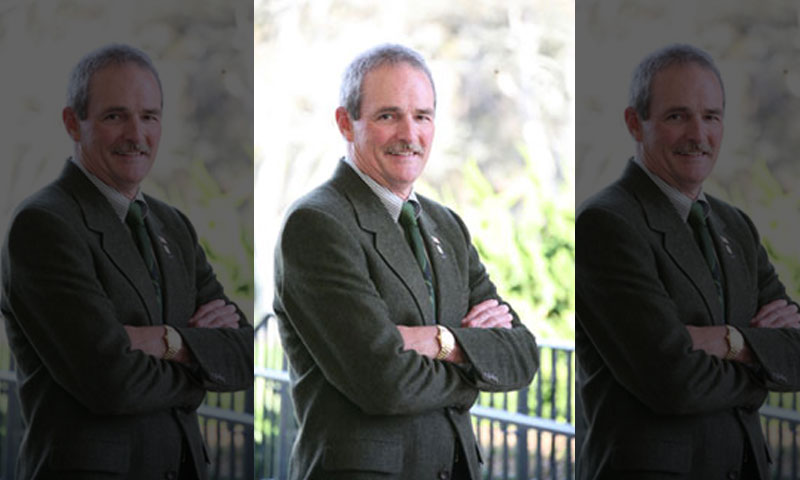 Dr. Gerald Brown, a lifetime member of the National Academy of Engineering, is a world-recognized leader in the development of defender-attacker optimization modeling, such as the ant-narcotics semi-submersible search model developed by his student Navy Cmdr. Daniel Pfeiff.

But the NPS team didn’t stop with just finding a better way to locate narco smugglers. After graduating this June, OR Senior Lecturer retired Navy Capt. Jeffrey Kline arranged for Pfeiff to brief the actual people in Joint Interagency Task Force South who are tackling the problem on a day-to-day basis.

Pfeiff’s thesis, “Optimizing Employment of Search Platforms to Counter Self-Propelled Semi-Submersibles,” is focused on detection and classification and assumes that interdiction is possible. He is currently senior analyst with the Office of the OSD CAPE at the Pentagon.

In July, a group of NPS students joined senior intelligence analysts from the Office of Naval Intelligence-Kennedy Irregular Warfare Center and Joint Interagency Task Force South to brainstorm innovative solutions to the same SPSS challenge at a Warfare Innovation Workshop held at the School co-sponsored by the Chair of Warfare Innovation, Naval Warfare Development Command (NWDC). At the conclusion, out-briefs were presented to NWDC’s Assistant Chief of Staff for Concepts, the SES Special Agent in Charge of the Department of Homeland Security Immigration Customs Enforcement, OPR-SAC West, NPS’ co-chairs for warfare innovation and the university’s leadership.

Brown recently received the Distinguished Navy Civilian Service Award from the Secretary of the Navy, and is a lifetime member of the National Academy of Engineering.

This year, the Naval Postgraduate School Operations Research Department was ranked as the top OR department in the nation based on the number of times its faculty’s publications are cited by colleagues.

Brown’s pure and applied research is sponsored by the Office of Naval Research.