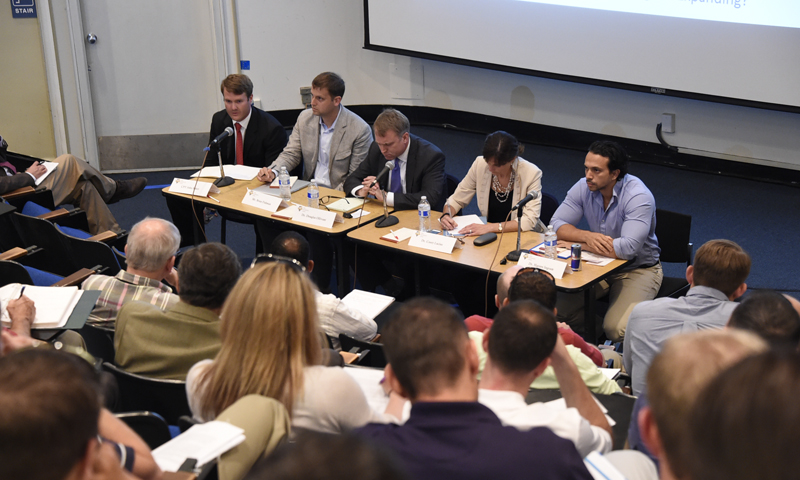 Defense analysis student U.S. Army Capt. John Baker gives a brief history of the Islamic State of Iraq and ash-Sham (ISIS) during a panel discussion titled “The Islamic State: Remaining and Expanding?” held in Ingersoll Hall, Aug. 20. Baker was joined by several experts for the Naval War College Monterey workshop on the future of ISIS, and potential strategies for countering the extremist group.

The panelists discussed, and at time debated, ISIS information operations (IO) and networks as well as U.S. interests in the region and Western policy options.

“We must really think seriously about how we think about this problem. How we think about ISIS will shape how we deal with them … Our thinking is too narrow on this subject,” said Ingram. “The only chance we have to develop a response to ISIS is to understand their insurgent logic and reverse engineer their solutions.”

According to Ingram, this sort of analysis has been frustrated by a “myopic focus” on the shocking scope of ISIS’ violent activities, a tendency that has blinded many in the West to the organization’s goals on the ground.

“We lose sight of the much broader picture,” he explained.

Ingram contends that the slick, uber-violent productions released by ISIS are part of an IO campaign that speaks to the population it is trying to influence. He notes that IO is critical to insurgents because their success or failure often depends on public perception in areas where they are trying to compete with an established state.

ISIS is currently using its products to win public support and foster a sectarian identity, among ISIS supporters, that links security and success with ISIS. At the same time, the campaign associates regional dysfunction, insecurity and corruption with ISIS’ adversaries, he explained.

“A hallmark of ISIS’ appeal is their ability to combine their message with rational choice appeals,” said Ingram. “They attribute crisis to their enemies and tie solutions to themselves.”

Baker discussed the success of ISIS IO campaigns in spite of the air campaign against ISIS militants. He and other panel members expressed frustration with the current air campaign noting that bombing alone cannot defeat ISIS.

“The terrorist acts of the 90s and 2000s were a product of Iraqi jihadists being raised under extremist ideology. If we continue to allow this generation of young Iraqis and Syrians to grow up under that ideology, what fruit will it bare?” asked Baker.

“It’s amazing that after 14 years of counterinsurgency operations that we think that a war of attrition will work,” he continued.

“The earliest networks al-Zarqawi built in Iraq were regional. They extended into Jordan, Syria and Lebanon … Those networks never went away.

“We killed 32 of 40 leaders in 2010, but they responded with, ‘We will remain due to the blood of the martyrs,’” Fishman quoted. “ISIS was able to explode into Syria because the networks that it used already existed.”

“The Iraqi government is as weak and dysfunctional as it is democratic and unresponsive. It is weak by design,” he said.

National unity governments, like the one in Iraq, are the most inefficient forms of democracy, Ollivant stressed. Imagine a U.S. democrat being elected president, but being forced to include republicans hostile to his agenda in his cabinet.

In Iraq, however, the divide between competing interests is far greater than the divide between the U.S. Republican and Democratic parties. Iraqi political factions tend to form along tribal and sectarian divides that are centuries old. And as the fortunes of Sunni Arabs have changed with the rise of a Shia dominated government in Baghdad, so too has widespread public resentment, conspiracy theories, and perceptions of inequality.

“Clearly Sunni citizens feel they are being deprived, but how much of that is real and how much of it is perceived? Are they truly being oppressed or are they just no longer getting the disproportional level of jobs and other advantages that they once enjoyed? It’s an open question,” said Ollivant.

Casey Lucius approached the rise and expansion of ISIS through the lens of U.S. national interests. She discussed the question of U.S policy in the region and questioned whether or not there are legitimate U.S. interests in ISIS affected areas that warrant intervention.

“It's a problem when we start with a tactic, and move toward a policy,” said Lucius. “We need to begin with a policy.”

Lucius described national interests as the things “we are willing to die for.” In her estimation, they include trade and prosperity, energy supply, freedom of the seas, national security, safe access, and perhaps cyber security.

She argued that ISIS should be engaged as a state, with U.S. national interest in mind. Doing so would “open up a variety of options by which we can engage without having to chooses between either engagement or disengagement,” she said.

And while Ingram recognizes that there are elements of the extremist organization that function like a state in its strongholds, he is quick to point to ISIS’ ragged edges where any semblance to a modern state begins to unravel.

For now the debate continues, and both students and faculty members across the NPS campus are contributing to the discussion.