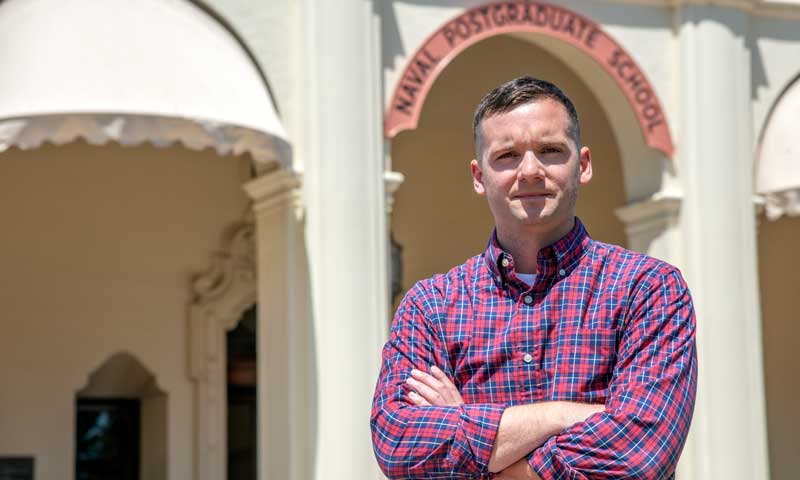 NPS Marine Corps Capt. Alexander Preston will serve as a military liaison between Elroy Air and the university during an 18-month Cooperative Research and Development Agreement to explore autonomous aerial resupply and support systems.

The Naval Postgraduate School (NPS) and Elroy Air, a producer of unmanned aerial cargo systems, recently signed a new research agreement which will allow for the mutually-beneficial exploration of autonomous aerial resupply and support systems for the two signatories as well as the U.S. Marine Corps.

NPS and Elroy Air officially launched an 18-month Cooperative Research and Development Agreement (CRADA) on March 22 opening the door for collaboration between NPS faculty and students with the company. The CRADA is one of a handful of recent research agreements with industry partners in response to SECNAV Richard V. Spencer’s call to the university.

“The idea behind this is that government expertise and industry know-how combine to create a new product or capability, or a commercial capability is made easier for government to apply to its needs,” explained Dr. Ray Buettner, NPS associate professor of Information Sciences.“[Elroy Air] is a Silicon Valley company that is developing an autonomous logistics capability that could potentially enable a platoon of Marines or a Special Operations Team to operate very far forward, all without the risk of manned aircraft trying to resupply them in dangerous environments.”

Preston said his experience as a logistics officer will provide a mission-oriented mindset to the industry developers in order to create a product that can operate successfully in contested environments.

Under the CRADA, Preston will spend several days each month at Elroy Air’s facilities near San Francisco, working with the team in person. Preston will also learn not just the system engineering requirements that go with his program’s curricula, but how these requirements are met by civilian industry as opposed to the DOD or defense contractor.

“We look forward to the opportunity to partner with NPS,” said Elroy Air Co-Founder and CEO David Merrill. “I am confident that we’ll learn a lot from each other, and advance our shared understanding of optimal concepts of operations in unmanned aerial logistics.

“The aerospace history has numerous examples of productive partnerships between private companies, academia and governmental organizations,” he continued. “We look forward to testing our systems collaboratively with the team at NPS, as well as sharing our industry knowledge about the art of the possible.”

NPS first became aware of Elroy Air’s work during one of the quarterly Joint Interagency Field Experimentation (JIFX) events held at Camp Roberts that allows for industry representatives and DOD personnel to network to find solutions to modern problems.

While the partnership with Elroy Air is at an early stage, Buettner says he does expect that the Marine Corps will emerge more prepared to rapidly adopt and employ these technologies because of the thesis and class projects that are part of this effort.