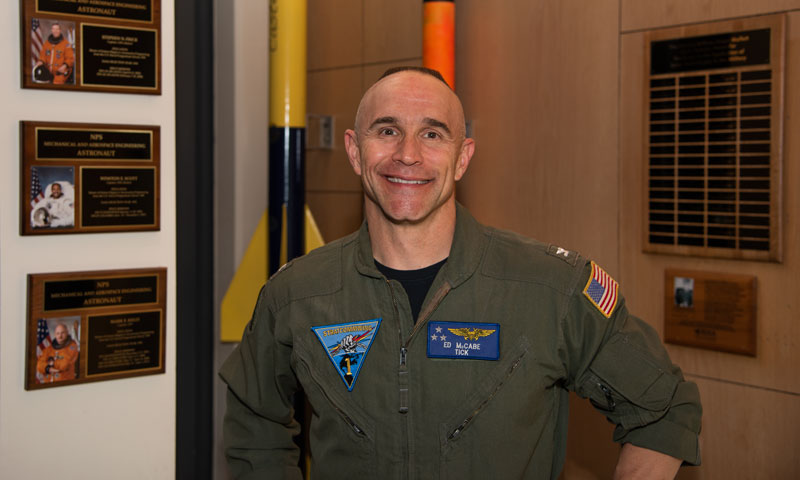 NPS welcomed U.S. Navy Capt. Ed “Tick” McCabe as the university’s first Air Warfare Chair. As an alumnus, McCabe looks to apply his first-hand knowledge of the institution to strengthen the connection between the university and the aviation community.

The Naval Postgraduate School (NPS) recently welcomed Navy Capt. Ed “Tick” McCabe to the university campus as its first-ever Air Warfare Chair. Much like similar warfare chair positions at the school, the NPS Air Warfare Chair will serve as a mentor to the cadre of aviator students on campus, as well as a liaison between the Naval Aviation community, and the NPS community.

McCabe comes to the institution following recent assignments such as Commander, Strategic Communications Wing ONE, and three tours with the Ironmen of Fleet Air Reconnaissance Squadron THREE. As an alumnus of the school, McCabe says he learned the value of an NPS education first-hand when he graduated in 2000 with a Master of Science in Systems Technology. But, he adds, his community of Aviators is not capitalizing on the opportunity as much as they should.

“There is a great deal of value in the critical thinking and development that you obtain here, but historically, the aviation community has gotten little return on that value,” said McCabe. “We have not cracked the code of how to send an aviator here without taking them off track for command.

“I am an exception to the rule, I continued on with a prosperous career after coming here as my first shore tour term as an Aviator,” McCabe continued. “And that’s what establishing an Air Warfare Chair is all about, addressing that problem so that we can send Aviators here for the valuable education that NPS provides, and still keep them on track for future leadership roles.”

The chair position was established by an agreement with the Navy’s previous “Air Boss,” now retired Vice. Adm. Mike Shoemaker. As then Commander, Naval Air Forces, Shoemaker advocated for the position in hopes of emulating the success U.S. Naval Surfaces Forces had with the establishment of the Surface Warfare chair.

“We have some perplexing issues facing Naval Aviation and we have to be able to ask the right questions, because we can’t afford to be wrong. NPS gives you the critical thinking skills and insights to do that,” said McCabe. “This position will help provide great mentorship and leadership roles for the Aviators on campus, which helps provide the means for the Aviation committee to send their people here and keep them on due course.”

As he settles in to the position, McCabe sees one of his most important initial responsibilities is to act as a liaison, to help connect students’ research with some of the key issues in the Aviation community.

“If you are an Aviator at NPS and you are working on a thesis, where do you go?” asked McCabe. “You should be able to have someone to go to and ask, ‘What issues are there that I can address?’ That’s where I come in.”