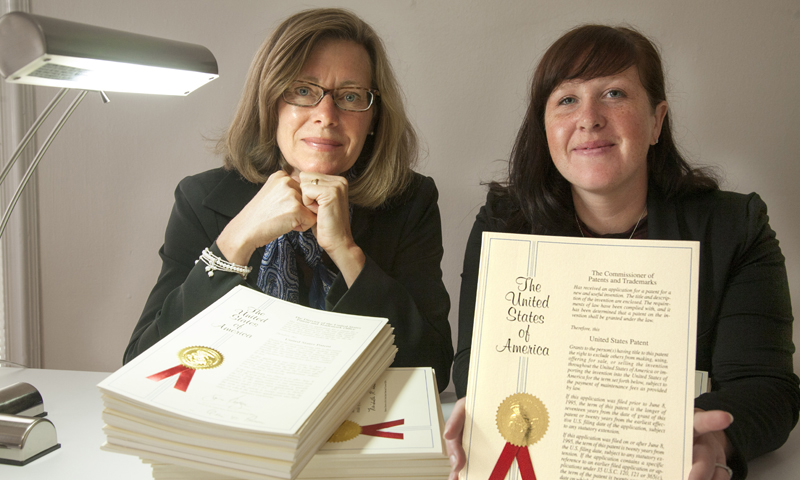 Associate Counsel, Intellectual Property Attorney Lisa Norris, left, and her assistant, Paralegal Kate Black-Will, right, are pictured in their NPS office with some of the patents they have worked tirelessly to file and defend. Their work ensures that NPS students and faculty receive proper recognition and that their intellectual property is protected.

Associate Counsel, Intellectual Property Attorney Lisa Norris, and her assistant, Paralegal Kate Black-Will, are an Army, or perhaps a Navy, of two, with a singular mission to protect the intellectual property of NPS students and faculty.

Norris came to NPS six years ago after practicing patent law at a local patent firm in Monterey and earlier at a large Silicon Valley patent firm. But prior to beginning her legal career, she served in the Air Force as an electronic-communications officer where she was given the opportunity to study at NPS earning a Master of Science in Systems Technology.

“I love this school, it is really great to be back here at NPS,” said Norris.

Black-Will was brought on recently to assist Norris. As a paralegal, she is trained to spot legal and factual issues and to properly file actions with the courts and agencies that support the patent process.

“My job as a paralegal is to make the attorneys’ lives easier, allowing them to do more legal work as I take on some of the administrative burdens,” said Black-Will. “For years, Lisa has had to do all her own support work … As the new patent paralegal, I hope to free up [Norris’] time from the more menial tasks, allowing her to get to the important work - patents.”

But although Norris was a one-woman-show for longer than desired, she has been an effective advocate for NPS inventors.

“When I came on board, there were six active patents, now there are 39,” said Norris. “All of them are very interesting. I have filed for everything from satellite release systems, and electronic circuits to plasma propulsion systems.

“One of the reasons we file patents defensively is to protect the Navy from being sued for infringing someone else’s invention,” said Norris. “Companies can attempt to sue claiming that the Navy is using their technology and intellectual properties.”

When a patent application is filed, Norris must also argue as an advocate for NPS inventors. When [U.S. Patent and Trademark Office] Examiners examine a patent application, they can find that an item already exists, or they can say that the information “art” is already out there.

“When you get an action you have to look at all of the art and argue why yours is unique,” said Norris. “I have argued 133 actions to date; some are very easy to argue, others are quite hard, but the inventors always work with me.”

The Navy also has a financial incentive for protecting the work of NPS researchers.

“Licensing royalties are an important consideration, as they provide revenue back to the inventor, NPS and the Navy, each entity gets a percentage of the royalties earned.

“Currently we have three patents that are licensed, two of which are paying royalties,” said Norris. “The two commercially-licensed patents at NPS that are receiving royalties are related to a motion tracking system. The other government purpose licensed patent is related to a method for determining optimal transmitter placement for the creation of wireless networks.”

The work accomplished by Norris and Black-Will is an important tool in the NPS toolbox - a tool that seeks to ensure that the work of NPS students and faculty receives its proper recognition and that it is protected long after NPS researchers have moved on.