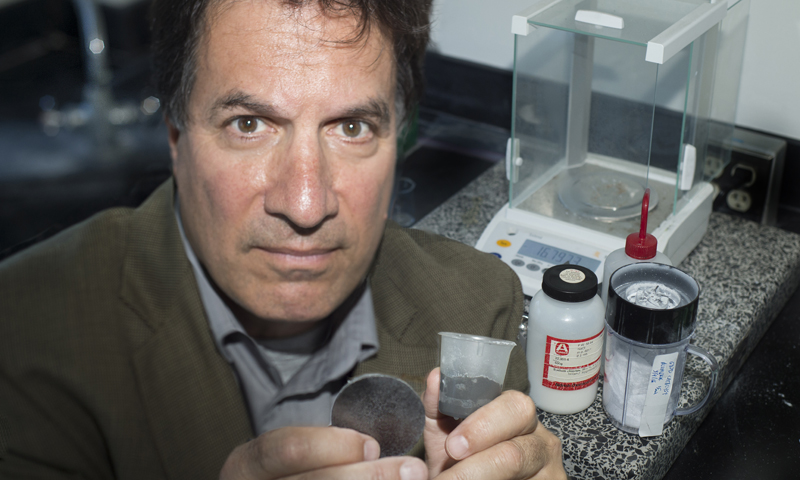 Naval Postgraduate School (NPS) Research Professor Jonathan Phillips is pictured in his NPS lab with a sample of the “beach sand” he created to increase capacitor performance. Phillips and his students say they have dramatically increased the output of parallel-plate capacitors with the substance.

Naval Postgraduate School (NPS) Research Professor Jonathan Phillips has been reaching out to anyone who will listen about what he calls a “revolutionary” development in the field of capacitors with vast naval and commercial implications.

“For a few years, no one believed me, but our Novel Paradigm Supercapacitors [NPS] are now getting traction.” The bottom lines, he says, is a dramatic increase in the “dielectric constant of the best dielectrics by more than six orders of magnitude.”

Phillips and his team came to this discovery by putting conventional wisdom aside, and revisiting a long dormant area of capacitor research. In short, the team devised a means whereby electrostatic capacitors can store far more energy than alternative capacitors – including supercapacitors.

“We think that we are just at the beginning. We are at this little, tiny lab at NPS and we are the only team in the world studying this,” Phillips said.

Any object that will hold an electron until a desired release is a capacitor, and they are important to the Navy, and industry, because they have the potential to store and release large bursts of energy in relatively short periods of time.

“You want capacitors to be really, really high in electron density because their energy is stored in individual electrons,” Phillips explained. “Every electron you bring up to the electrode surface is one more pellet of energy that you can release.”

Over the years, researchers have tried many things to improve capacitor energy storage. In recent decades, two primary methods have been the focus of nearly all capacitor research. Researchers have created integrated circuits or “micro-machines” that work by bringing the plates in parallel plate capacitors very close together - as little as a micron apart.

“As they get closer and closer, an electron way off ‘at infinity’ sees nearly equal plus and minus fields. So the plates, if close enough, will produce a very small net field, making it easier to bring an electron up to the electrode for storage,” explained Phillips.

But most researchers have focused primarily on a second area of supercapacitor research, which aims to improve efficiency by increasing the electrode surface area within capacitors. This is done by replacing metal plates with highly conductive, high-surface-area materials like graphene.

Phillips is focused on a third method that relies upon an area of research largely abandoned decades ago – the dielectric constant of the material placed between electrodes in a capacitor.

“I’m working on the Epsilon, or dielectric, value … I ignored 30 years of mathematical nonsense and went back to the understanding of dielectric behavior that was widely held,” he said emphatically. “I believe people had it right, we just took a turn in a strange direction.”

Traditionally, the gold-standard of polarizable materials for capacitors has been barium titanate. It increases a capacitor’s energy density by a factor of 1,500. But Phillips realized that he could dramatically increase energy density with nothing more than water containing a high concentration of dissolved salt.

“[But] I had to figure out how to trap the water. We had three ingredients in the first generation of our experiments: a powder, either silica or alumina, water and salt. I first added salt to the water to create a saturated solution, then added that solution to the powder to form what is essentially wet beach sand. With it, our dielectric constants are ten to the tenth power. We are increasing the dielectric constant not by a factor of two or 10, but by one million relative to barium titanate. It’s a complete revolution. We are getting energy densities in the same ball park as older types of batteries. Our prototypes are unsurpassed by even the best graphene based supercapacitors,” Phillips said.

Phillips and his students are excited by their success, but the work is far from over. He notes that despite the excitement of his discovery, there are challenges that must be addressed.

“We have these large dipoles that do not flip as fast as we would like and this means the energy delivery rate decreases with increasing frequency. Another problem is that in any liquid based system, the electrolyte becomes conductive at a relatively low voltage, limiting total energy,” explained Phillips.

But while challenges remain, neither of the problems that Phillips and his students are addressing are unique to NPS capacitors. Phillips notes that standard supercapacitors are dealing with the same problems. He and his students are working to overcome these challenges by experimenting with, among other things, salt water saturated anodized metal and different electrolytes.

Ensign Clayton Petty is one of Phillips’ students. He began working with capacitors while attending Phillips’ advanced energy materials course, and became interested in Phillips’ efforts to improve capacitors from a materials science perspective.

“As Phillips’ research student, I am looking at different ways to improve overall capacitor performance, ultimately measured in energy density, by using different combinations of materials to act as the capacitor’s dielectric,” said Petty.

Petty, who is a mechanical engineer by trade, notes that his work at NPS affords him an opportunity to do work with potentially wide-ranging applications across several engineering fields.

“Renewable energy is likely one of the biggest beneficiaries of capacitor research. Without the ability to store energy for use when renewable sources are insufficient, the implementation of fossil-fuel-free energy generation sources will fail to become ubiquitous in our daily lives.

“Our research has shown orders of magnitude improvements versus current technologies, which is certainly an exciting prospect,” said Petty.

But, Phillips and Petty’s work with capacitors goes beyond renewable energy research. It also has exciting implications for Naval weapons systems.

“Specific to the Navy, our capacitor research has significant implications for critical new weapons systems that the Navy is developing, like the rail gun and high-energy laser weapons,” said Petty. “Both are examples of systems that require a large release of energy in an instant, which is the essence of how capacitors operate.”