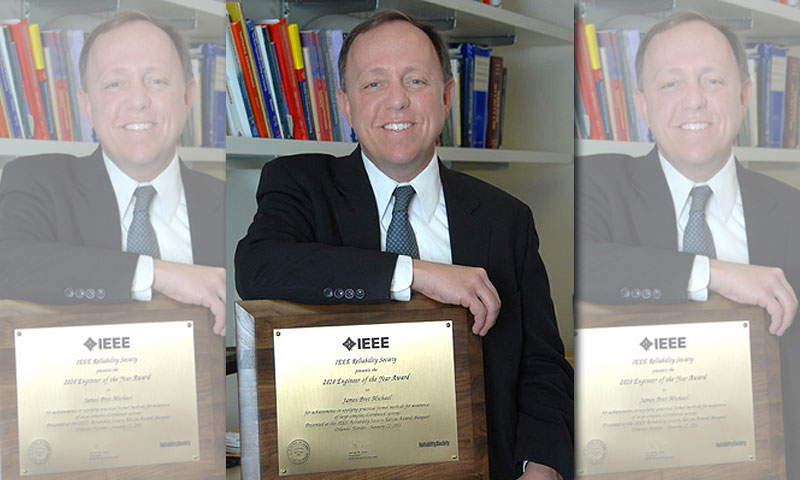 NPS Professor Bret Michael was awarded the IEEE Reliability Society 2010 Engineer of the Year Award on Jan. 22 for his work in formal methods. He currently teaches Computer Science and Electrical Engineering and has been at NPS since 1998.

NPS Professor Bret Michael was awarded the Institute of Electrical and Electronics Engineers (IEEE) Reliability Society’s 2010 Engineer of the Year Award at their annual awards banquet on January 22 in Lake Buena Vista, Fla.

Michael was honored for “achievements in applying practical formal methods for assurance of large complex distributed systems.” The award acknowledged his dedication to the reliability profession, contributions to reliability management and education, and his work with the IEEE Reliability Society throughout his career.

“Bret was selected for the award based on a combination of factors,” said IEEE Division Six Director Jeffrey Voas. “The dedication he has shown to the Reliability Society is one of the criteria, as well as his recent work in formal methods, related to software reliability and software safety. He also was cited for previous work he’s done in other software engineering related areas, particularly in education because he is viewed as a really great educator.”

Before joining the NPS community in 1998 as a visiting professor, Michael worked as an Assistant Research Engineer at the University of California Berkeley and as a visiting scholar at the Institut National de Recherche sur les Transports et leur Securite in Lyon, France. He has also maintained a leadership role within the IEEE Reliability and Computer societies, and worked closely with steering groups and working committees in the U.S. and abroad.

“My work has been focused on very large systems and primarily the systems used by the DoD and NASA,” explained Michael. “The challenge is that the systems are so large and complex that the traditional approaches to applying formal methods just don’t work. So my research group and I have taken a different approach over the past eight years. We came up with a framework for actually applying what are known as lightweight formal methods on these systems. The framework gives us direction as to where to apply the formal methods.”

Michael’s research, which has involved both NPS students and faculty, has delved into the development and assessments of large-scale distributed systems such as methods for conducting safety analyses of systems, frameworks for applying lightweight formal methods in computer-assisted verification and validation of systems, and specification and refinement of security and reliability policy for cloud computing.

His current role as professor of Computer Science and Electrical & Computer Engineering allows Michael to involve students in the kind of research that he is known for.

“Our students have a vested interest in taking part in research on software systems assurance; When students leave NPS, and take responsibility for DoD system acquisitions, they need to be able to define trust in those systems,” explained Michael. “Formal methods are used to demonstrate and validate that such trust is correctly defined and assure the right functionality is specified and correctly implemented.”

The IEEE was established in 1884 to provide support and community to the electrical, electronic, computing fields, and related science and technology professions. It is the world’s largest technical professional society, which Michael joined in 1986. He is active in IEEE publications, and currently serves as an Associate Editor of the IEEE Systems Journal and was an Associate Editor-in-Chief of IEEE Security and Privacy Magazine from 2008 through 2010.

The IEEE Reliability Society Engineer of the Year Award is awarded annually, or less often if the society doesn’t find any deserving nominees. Michael was one of two Engineers to receive the 2010 award, the other being IEEE Fellow Professor Michael Lyu of Chinese University of Hong Kong.

“This research is truly interdisciplinary and team-oriented, involving faculty and students from GSOIS and GSEAS, in particular the Computer Science, Electrical & Computer Engineering, and Information Sciences departments,” Michael noted. “The research has further enhanced NPS' standing in the system assurance and software engineering communities in DoD, industry, and academia.”