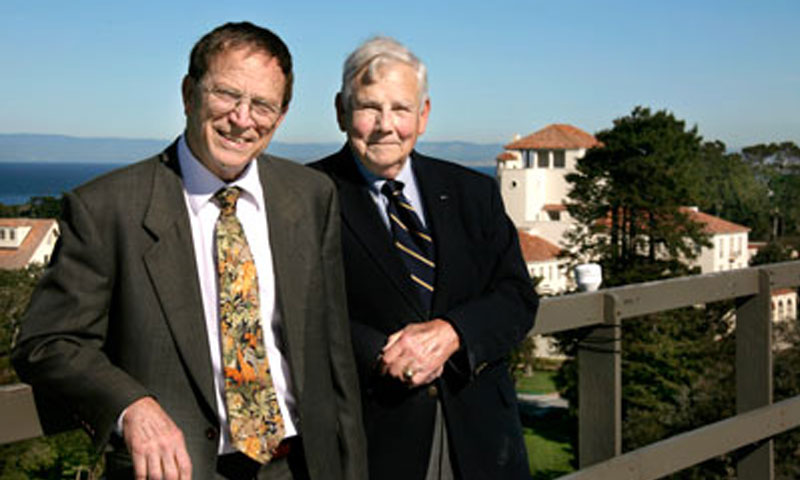 Two Naval Postgraduate School (NPS) faculty were selected as this year’s recipients of the J. Steinhardt prize by the Military Applications Society (MAS) of the Institute for Operations Research and the Management Sciences (INFORMS). The award was presented to Operations Research Professor Wayne Hughes and Distinguished Professor Emeritus Al Washburn at the INFORMS annual meeting in Austin, Texas, November 7-10.

The J. Steinhardt Prize is sponsored by the CNA Center for Naval Analyses Corporation to honor individual career accomplishments in practicing or managing military operations research (OR). The award’s namesake, Jacinto (Jay) Steinhardt, was a founding member of the Operations Research Society of America, and his lifelong contributions to the operations research community, through his work in military OR and his thoughts on the discipline, have been memorialized with the prize. It is awarded for a person’s life work and not for any specific contribution.

Hughes also noted that it was an honor to join other distinguished professors from NPS who have received the award, including Washburn, Dave Schrady and Jack Borsting. His research interests over the years have included tactical and campaign analysis, joint littoral warfare, theory of combat and naval history. With over 40 years experience as a teacher at NPS, Hughes continues advising students and conducting research work for the DoD leadership.

“Every well read naval officer knows the name Wayne Hughes,” said Senior Lecturer and Retired Navy Captain Jeff Kline. “His seminal book on Fleet Tactics is one of the most read studies by professional maritime officers. I am proud to call him mentor and friend, but I am only one of many, including Admiral Mike Mullen, Chairman of the Joint Chiefs of Staff, who was Wayne’s thesis student.”

Also bringing decades of experience to the OR community, Washburn, was inducted into the National Academy of Engineers in 2009. He has been bringing his expertise in mine warfare, antisubmarine warfare, munitions planning, and information warfare to the NPS community since 1970.

“My main lifetime achievement as far as MAS is concerned is probably the theoretical work I have done on search theory, particularly when the target is mobile and doesn’t want to be found,” said Washburn. “I have written tutorial notes on various topics, and have recently published a book, Combat Models, with Moshe Kress.”

Washburn also commented that he was especially delighted to receive an award that is sponsored by CNA, an organization whose roots go all the way back to WWII. He had admired CNA from afar for all of his professional life, and has had several fruitful interactions with its employees. His research interests include applied probability, search and detection, optimization, combat models, game theory and undersea warfare.

“If you want to find something, Al’s the one to ask,” remarked Kline. “In addition to literally writing the text book, the name Washburn and search theory are linked for generations of applied mathematicians and operations analysts. Washburn rises to many analytical challenges, ranging from the value of cued information to national issues on risk.”