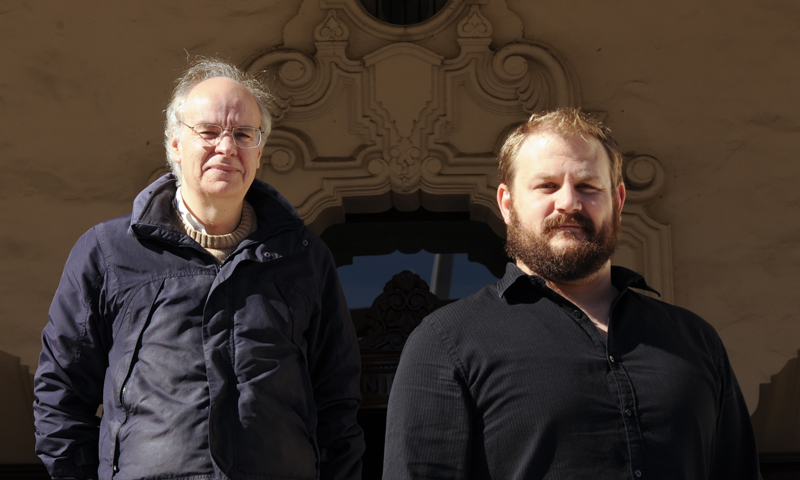 Strawser and Rowe will serve as co-principal investigators, along with Western Michigan University Professor Fritz Allhoff and California Polytechnical Institute Professor Patrick Lin. The ethics and philosophy experts received the funds to explore, “Safeguarding Cyberspace with Ethical Rules for Cyberwarfare.”

Strawser is NPS’ resident philosopher, a visual anomaly amidst his fellow professors who believes in the power and necessity of asking big questions – questions that he believes are the foundation upon which sound research is built. Quoting American philosopher Wilfrid Sellars, Strawser explains the philosophical approach that he hopes to utilize while exploring cyber ethics.

Strawser is best known for his work on the ethics of unmanned systems. His book, “Killing by Remote Control: the Ethics of an Unmanned Military” explores the potential ethical gains and pitfalls of drones. The NSF grant will now allow him to turn his inquisitive eye to the field of cyber warfare.

“We have established international norms on conventional warfare, but we need to come to a consensus on the norms of cyber war,” said Strawser. “What is cyberwarfare, and what actions in the cyber realm constitute an act of war?”

Strawser and his colleagues intend to use their grant to, amongst other things, provide a policy report and to bring together some of the world’s best thinkers in the realm of cyber ethics.

“Our policy report will go to the NSF and key DOD and NATO policymakers. We hope it will become something that will influence policy in this important area of study,” said Strawser. “We will also be writing a book, holding workshops, an international conference and will develop a curriculum to teach the ethics of cyberwarfare.”

Rowe’s background in artificial intelligence makes him the only non-philosopher among the grant awardees. He will be guiding his co-principal investigators on the more technical aspects of the research.

“I am the technical guy in the project. It is important that we understand what is possible … There is all sorts of new technology that we must evaluate as we sort out what is reasonable and what is not,” he said.

Rowe, although not a philosopher or ethicist, is well versed and has published several papers on ethics of cyber war.

“Ethics is not just abstract, it is useful. It should lead to agreements between states as we explore this issue,” said Rowe. “Ethics should lead to laws, particularly in regard to new technological developments.”

Key to Rowe’s contribution to the team’s research effort will be his work in cyber forensics. Ethical questions aside, if you cannot determine who attacked you and how, the ethics of a retaliatory response become a mute point.

“I do the same work on digital forensics that police investigators do when collecting physical forensics,” said Rowe. “I also work on intrusion analysis, trying to find attacks and figure out what our adversaries are doing.”

Both Strawser and Rowe are quick to point out that, despite the digital nature of the work, cyberwarfare has progressed to a level that is hardly benign. Cyberwarriors are no longer just hacking accounts or collecting data; they are taking overt actions that affect people’s lives in manners that, if conducted by kinetic means, would almost certainly be construed as acts of war.

“STUXNET resulted in real damage to an [Iranian facility], and there are reports that at least one person was hurt. If the Iranian facility was hit by a missile, than clearly that would have been a military action. Is a cyberattack the same thing? I don’t know, that is what we are going to explore,” said Strawser.

“People can definitely get killed in cyberwarfare, when you start messing with large powerful systems … but I am more concerned with the harm to society” added Rowe. “That is why I think it is important to talk about cyber ethics.”