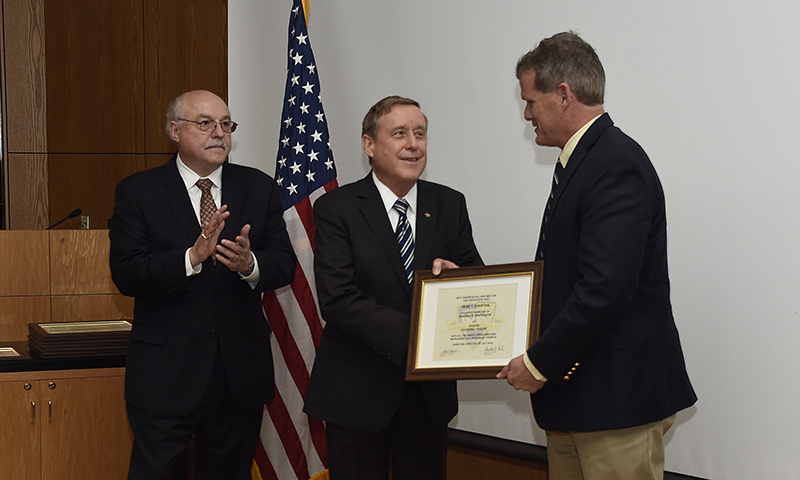 NPS Provost Dr. Douglas A. Hensler, left, applauds as NPS President retired Vice Adm. Ronald A. Route, center, presents Associate Professor Sean Everton, right, with his promotion and tenure certificate during a ceremony, May 8. Everton was one of 15 NPS faculty honored at the ceremony.

Hensler noted that being a faculty member is “more than a 40 hour per week job” and thanked the families of the assembled faculty for their support. He also pointed out that the awarding of promotion and tenure are signs of a healthy institution.

“There are events that demonstrate that the lifeblood of a university continues to flow. This is one of those events,” said Hensler.

Associate Professor Jonathan Lipow was one of the honorees, recognized for his award of tenure at the ceremony. He has worked as an economist with the Defense Resources Management Institute (DRMI) at NPS for the last six years. Prior to coming to NPS, he worked for the Israeli Ministry of Defense and taught at Hebrew University where he developed an interest in what he coined ‘expeditionary economics.’

Lipow’s work at NPS is rather unique. In fact, there are only a small handful of people exploring similar research interests.

“I am one of a few people that is doing theoretical work analyzing the attributes of the draft versus an [all] volunteer force,” said Lipow, who is also looking at the pros and cons of labor unions within military forces, a practice not uncommon outside the U.S.

Lipow’s latest work involves an in-depth analysis of data gleaned from the U.S. Army and the Veteran’s Administration.

“I got a U.S. Army data set of the people who joined the Army in the four years prior to the Iraq War. It allows us to look at what happens afterwards in regard to family life, education, income and other demographics,” Lipow said.

According to Lipow, numbers like these are difficult to obtain. He hopes that they will shed light on important issues like post-military compensation and social service needs.

“The issue for economists is finding a clean data set that helps them to differentiate between groups, that randomizes people and allows you to compare like items,” explained Lipow.

“If we look at who joined in 2001, we can compare people who deployed and those who didn't by profession … you can differentiate between people who chose to be in particular fields,” said Lipow. 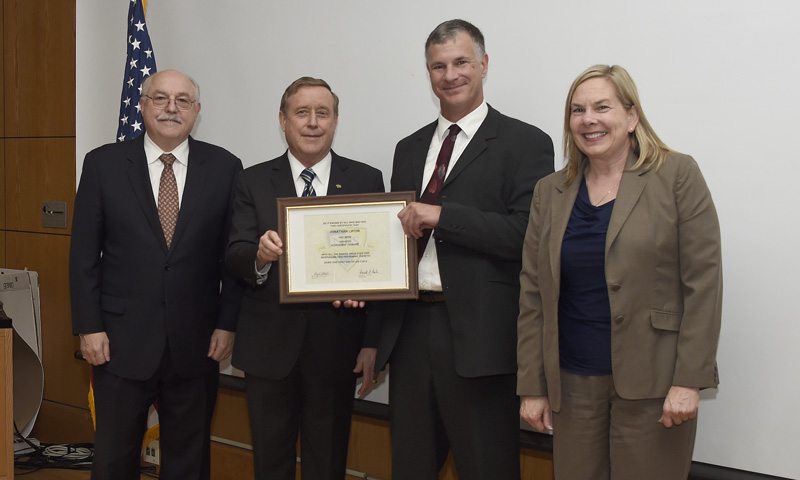 In the future, Lipow hopes to supplement data he has received from both the Army and the VA with IRS data that will help him to look at post-military service.

Dr. Leo Blanken was also recognized for his award of tenure at the ceremony. Additionally, he was promoted to Associate Professor. He is a political scientist with NPS’ Department of Defense Analysis and is currently working with the National Counter Terrorism Center to develop a means of conducting assessments of irregular warfare.

“During WWII you could measure what you blew up. But, it is more difficult to conduct wartime assessments when addressing irregular warfare, like the fight with ISIS,” said Blanken. His latest article, “Assessing War: The Challenge of Measuring Success and Failure,” will appear later this year in an edited book on the subject.

In addition to his work on wartime assessments, Blanken is working to develop a model that he hopes will allow policy makers and others to more efficiently plan future force structures.

“We invest a lot in weapons systems that we just can’t use,” said Blanken. “We are looking at developing a model that will help us to look at a better way to plan forces in our current political environment, not building systems that we cannot use against current threats.

“We have to recognize that the way we plan, build and develop forces is a legacy of the Cold War and it needs to be updated to meet the challenges posed by emerging threats,” Blanken continued.

Another honoree, Dr. Arturo Sotomayor, was also awarded tenure and promoted to Associate Professor at the ceremony.

“[Sotomayor’s] promotion and award of tenure are in recognition of his scholarship on the intersection of civilian-military relations and peacekeeping operations … and a major contribution to the subfield in international security,” said Hensler.

That contribution, reflected in part in Sotomayor’s award-winning book, “The Myth of the Democratic Peacekeeper, Civil-Military Relations and the United Nations,” recently received the prestigious Luciano Tomassini Latin American International Relations Book Award. The award is an annual recognition offered to the author of the best book on international relations in Latin America.

Sotomayor moved to the U.S. from his native Mexico in 1997 to study at Columbia University. He became interested in the role of youthful South American democracies in United Nations peace-keeping operations. His interest was spurred in part by UN attempts to garner assistance from Latin America in the ‘90s during UN-led peace keeping efforts in the former Yugoslavia.

“I was interested in the impact of these operations, especially their impact on societies that had experienced civil wars themselves, or were formerly authoritarian regimes,” said Sotomayor.

Sotomayor’s more recent work and teaching interests have centered upon the professionalization of military forces, and their subordination to civilian control.

During the ceremony, Route emphasized the important work that the awardees do in furthering NPS’ mission and their investment in the university’s unique student body.

“Here at NPS, not just any faculty will do. We need this faculty, that understands our students and their calling, that thinks ahead in their academic fields to tomorrow’s technology and defense needs, a faculty that accomplishes much and is recognized for their achievements,” said Route.