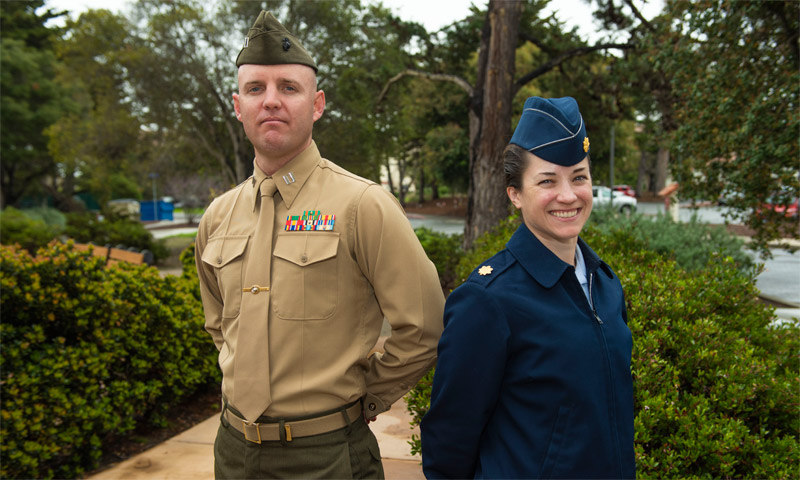 For the first time in eight years, Naval Postgraduate School (NPS) students have returned to the Middlebury Institute of International Studies (MIIS) campus in Monterey, Calif. as part of an exchange program that supports NPS’ ongoing effort to enhance partnerships with civilian institutions and academia to the benefit of its students.

According to National Security Affairs (NSA) Program Officer Cmdr. Paul Rasmussen, the exchange program was revitalized after the Secretary of the Navy Richard V. Spencer stressed the importance of expanding NPS’ partnerships with academia during a visit to NPS in 2018.

“With the positive trajectory that NPS has right now on partnering with other institutions, it was the right time to breathe some new life into this program,” said Rasmussen. “The biggest benefit is that it is going to open up future possibilities for partnership, collaboration and innovation between the faculty, staff and students of NPS and MIIS.”

MIIS and NPS share similarities within their curriculums in that they teach contemporary international politics, history and strategic studies. However, the MIIS courses in which the NPS students are enrolled come with the twist of being taught completely in a foreign language.

“Being taught master’s level courses in a foreign language adds a whole new dynamic of complexity to their studies,” said Rasmussen.  “In many ways, it is similar to our international students here at NPS, who have to engage with their classmates and material in a foreign language.”

“We want our students to not only leave Monterey with an NPS education, but with a broader education,” said Dahl. “Interacting with a diverse group of students and faculty at MIIS translates into our students becoming more effective, better educated officers.”

Due to the foreign language aspect of the course, NPS students already fluent in a language, or officers slated to become Foreign Area Officers (FAO), are strong candidates to take part in the program.

When the opportunity for the program was advertised to NPS’ NSA students, the advertisement included a variety of potential courses, from Nuclear proliferation to Russian cinema. For Air Force Maj. Caitlin Diffley and Marine Corps Capt. Jason Hotalen, both prospective Foreign Area Officers (FAO), this was a perfect fit for them to refine and diversify their expertise.

FAOs are commissioned officers from any of the four branches of the United States Armed Forces who are regionally-focused experts in political-military operations, possessing a unique combination of strategic focus and regional expertise in the area they are assigned.

“My class focuses on Russian through culture, so it is all conversational and all in high-level Russian,” said Diffley, who had studied the Russian language for 47-weeks at the Defense Language Institute (DLI) at the Presidio of Monterey. “I am gaining access to a Russian cultural mentality that I would not have had otherwise. This really opens the door for me to a lot of cultural discussions that are very new to me.

“From what I’ve learned so far, Russia makes choices very differently than we do,” Diffley continued. “Since FAOs are charged with being regional experts, being able to recognize the motivation, strategy and thought process of either an adversary or an ally is really important.”

The program was equally fitting for Hotalen, who is fluent in French and grew up in Sub-Saharan Africa.

“I have always been interested in leveraging my very unique experiences to help the Marine Corps,” said Hotalen. “MIIS is going to make me a better communicator for sure. In today’s environment, the military is not operating in a vacuum and there is a real possibility of working with people like you meet at MIIS in the future.

“A knowledge of language and cultures opens up doors and unique opportunities,” he continued. “This also helps by presenting a new view of the world’s problems because, being a warfighter, my experience of the world and the violence in it is very different from the other students that you interact with there, and that helps expand your point of view.”

Given the valued experiences by this initial cohort of students participating in the exchange, Rasmussen says the collaboration is still only beginning to take shape.

“I think as we deepen this partnership, we can not only increase the number of students we send there, but they also can begin to send their students here, which will bring that fresh perspective to our own campus,” said Rasmussen.