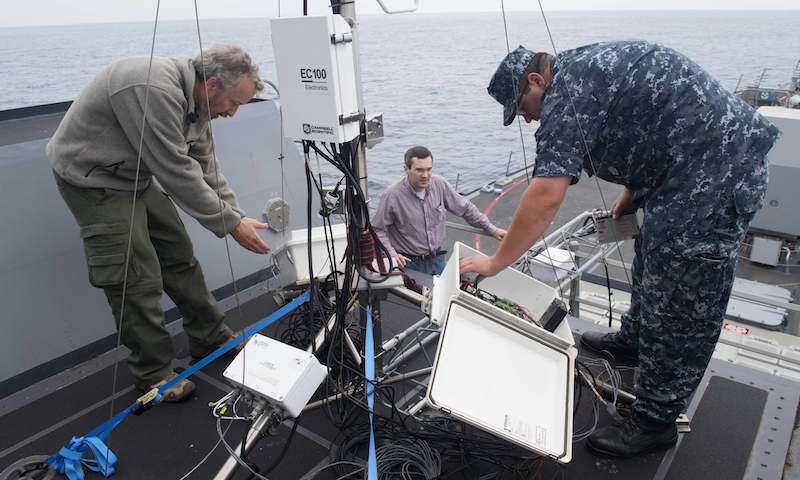 The Naval Postgraduate School (NPS) has brought the U.S. Navy one step closer to its goal of deploying laser weapons on destroyers by 2020.

Members of NPS’ Directed Energy Research Group went to sea in late June to measure turbulence in field conditions aboard the USS Spruance (DDG 111) off the coast of San Diego, and the data they collected will help estimate the performance of high-energy lasers (HELs).

“This is the first experimental work that’s been done on this particular effect,” said Dr. Joseph Blau, research associate professor with NPS’ physics department. “A lot of people have done work over the years on how turbulence is affected over the ocean or land, but people haven’t looked at turbulence right above the ship that could distort the laser beam even before it even gets off the ship.”

Unlike firing a laser from a fixed position on land, turbulence around a ship rolling through the waves presents significant challenges to accurately firing an HEL. The metal of a ship sitting in the sun constantly absorbs and releases heat which, along with the complex airflow over the superstructure, creates uneven, small-scale micro-turbulence around the vessel.

“When you’re driving down a road and see that wispy mirage out in the distance, that same effect happens on a ship,” NPS graduate student Lt. Jacob Busby explained. “The laser beam would have to propagate through that and that could potentially affect it.”

“Turbulence is a big factor, and it’s very important to characterize what that turbulence is, especially over the ship close to the source to be able to predict what the performance of the weapon will be,” added Dr. Keith Cohn of NPS’ physics department.

It’s worth the effort ... Firing laser weapons has many advantages over conventional, kinetic weaponry. Unlike ballistic munitions, lasers have a nearly instantaneous time of flight.

Traveling literally at the speed of light, a laser can precisely hit a target at great distances with a burst of directed energy. The intensity of the beam can be scaled anywhere from a non-lethal annoyance to a powerful blast that can fully disable the target.

Additionally, HELs are remarkably cost-efficient: laser weapons require just a little bit of electricity to fire and have a near-infinite magazine capacity.

“Now that a potential enemy has threats like inexpensive [Unmanned Aerial Vehicles], they can send swarms at our ships; if you’re sending million-dollar missiles at them, you’re basically losing the cost war,” Blau said. “Instead, if you can shoot a laser that only costs a few dollars per shot, then that’s sort of a game changer.”

The U.S. Navy realizes the potential impact of lasers on warfare, and over the last decade has actively pushed to bring laser weapons out of the realm of sci-fi fantasy into operational reality.

In 2014, the Navy successfully installed a prototype aboard the USS Ponce (AFSB(I) 15) for three years of at-sea testing, marking the first time the Navy has operationally deployed a laser weapons system.

“This is a revolutionary capability,” Rear Adm. Matthew Klunder, then Chief of Naval Research, said at the time. “It’s absolutely critical that we get this out to sea with our Sailors for these trials, because this very affordable technology is going to change the way we fight and save lives.”

For the Navy to take the necessary steps forward to deploy high-energy weapons across multiple platforms, environmental conditions with even minor impacts on system performance must be scrutinized and tested, in all possible scenarios and conditions.

Getting there requires refining HEL’s performance, and the Navy’s Space and Naval Warfare Systems Command (SPAWAR) expressed an interest in examining how near-ship turbulence might affect lasers at their source.

“This topic sort of came up in discussions with [SPAWAR], and the first step in the project was a couple of NPS theses we worked on a year ago which looked at turbulence on a test ship in port,” Cohn said. “The results from those experiments grew into, ‘well, okay, we really need to go out at sea with the ship moving and have the airflow over the deck to get a real feel for what the turbulence is doing.’”

When Busby arrived at NPS in the Spring of 2017 to pursue his physics degree, he brought with him an abiding interest in lasers, and the operational expertise of two division officer tours under his belt.

He became interested in the study being done on the test ship in port, and immediately turned a keen eye to follow-up research at sea. The trio soon began working to organize the experiment and acquire the necessary equipment.

They then spent the week of June 25-29 aboard the USS Spruance collecting data.

The team will spend the next several months analyzing the many gigabytes of data collected, which will be incorporated in Busby’s thesis.

“There are two results we’d like to get from this study,” Cohn said. “First, how much turbulence did we observe? Once we understand what the turbulence actually was, we can use that information to predict how a notional laser would perform were it mounted on the ship.”

“Second, we’d really like to understand why we saw the turbulence that we saw from the other measurements that we took,” he continued.

With the ultimate goal of deploying cost-effective, highly-lethal weapons systems on Navy vessels, the NPS trio is proud to be playing their own role in getting the service a bit closer this reality.