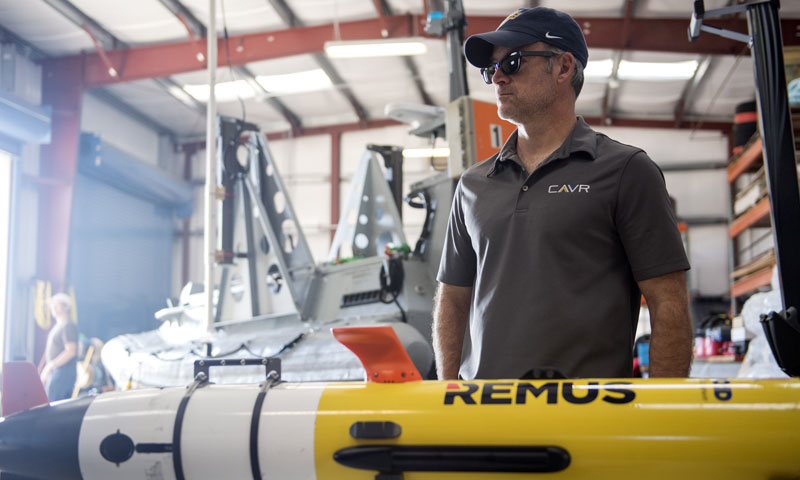 Dr. Doug Horner prepares a REMUS unmanned underwater vehicle for experimentation during the November 2017 Multi-Thread Experiment (MTX) off San Clemente Island in southern California. MTX is exploring the autonomous integration of unmanned systems across multiple domains, and how these systems can further support the fleet.

Beneath the waves, an unmanned underwater vehicle scanned the terrain to a small Pacific island and transmitted bathymetric mapping to a Navy SEAL team offshore.

The SEALs were offshore on a driverless surface vehicle, tasked with taking down a building on an island, 70 miles off the coast of Southern California. About 100 meters from shore, the frogmen exited the boat and swam ashore.

The team infiltrated inland while multiple unmanned aircraft drifted 6,000 feet above them, scouting road networks for enemy forces and calculating the optimal path for the SEALs to take. Meanwhile, an unmanned aerial vehicle (UAV) monitored the target and prepared coordinates for indirect fire support from a guided missile destroyer miles offshore.

As the SEALs moved, the unmanned vehicles automatically repositioned themselves in tandem, optimizing communication between each other, the SEALs, and the distant command and control element.

Once at the objective, the team deployed a small quadrotor from a backpack. The small drone self-navigated through the building, laser scanning each room and producing an accurate map of the structure. This allowed the team to know exactly where to hit without having to search each room.
The SEALs proceeded directly to the site and knew exactly which room housed their intended target. With their objective complete, the team proceeded to their exfiltration and extraction point under the umbrella support of a network of autonomous vehicles.

The scenario was notional, but the mobile network of unmanned vehicles – and the artificial intelligence allowing them to work together with minimal human input – was very real.

It was part of the Naval Postgraduate School’s first Multi-Thread Experiment, or MTX, held from Oct. 31-Nov. 12, 2017, on San Clemente Island. The experiment successfully tested the ability of a network to autonomously control multiple unmanned vehicles across domains: air, surface and underwater.

The main goals of the project are to reduce reaction time to threats and increase the “tooth to tail ratio,” according to Dr. Douglas Horner, technical lead and former Navy SEAL.

“The way we do that is by making the robots smarter, by making the networks more adaptable, through the use of techniques in artificial intelligence known as machine learning, to control the overall system in such a way that it can react faster and more accurately than what we’ve been able to do in the past,” Horner explained.

Increasing this ‘tooth-to-tail’ ratio means the numbers required for logistical support for unmanned systems is reduced. Additionally, the presence of a greater number of unmanned systems may mean fewer people are needed on the ground, he said.

Historically, unmanned systems required a dedicated operator to pilot the vehicle. For each of these remotely-piloted vehicles, such as the Predator, there’s somebody flying or navigating the vehicle, making all the decisions.

“It’d be nice if I could put up a whole swarm of vehicles and only have one or two operators, because not every one of those vehicles is necessarily going to have something important going on every minute,” said Navy Capt. Charles Good, Surface Warfare Chair at NPS, who helped facilitate MTX.

The issue, Good added, is not about taking humans out of the loop, but keeping humans in the loop in a way which makes them more agile, accurate and lethal, while minimizing their risk, with help from machines.

In an era of warfare where the “new normal” might be defined by a numerically superior or technologically equivalent adversary, the capability to deploy autonomous networks of unmanned systems may prove critical.

For example, the rapid modernization of China’s aggressive naval forces, Naval War College strategist Andrew Erickson recently wrote in the National Interest, is already seeing its quantitative-qualitative divide diminishing, and with it  closing a capability gap with U.S. and partner nation forces.

This includes potentially equipping its vast coast guard and maritime militia forces with unmanned air and underwater systems of its own. In February, the world watched in awe as a burst of more than 1,000 drones opened the PyeongChang 2018 Olympic Winter Games with a spectacular 3-D light show. The aesthetic merits of the display may be debatable, but the affair turned more than a few military heads.

This was underscored by the recent drone “swarm” attack on Russian forces in Syria, in which 13 off-the-shelf unmanned aerial vehicles packed with explosives were defeated by a hybrid anti-air missile and cyber defense.

The ability of the system demonstrated at MTX, to defeat a large drone swarm may be in the distant future, but Horner sees the potential.

“[This system] is not designed for that right now, but the thought process is that you want to have a network control system that has the distributed smarts to be able to make decisions without having to say ‘what do you want me to do now,’” he said.

Unmanned systems and automation grants the ability to successfully face off against an overwhelming force by preempting the enemy’s ability to react.

“We have to have our unmanned systems react faster than their manned and unmanned systems,” Horner said. “What you want to do is automate portions of the robotics, the network and the thought process on how to deploy these systems so that our ability to get them into place is quicker than our current capability.”

In this, the MTX research program is hitting the proverbial nail on the head when it comes to identifying and meeting fleet needs, according to Good. The November experiment went a long way in demonstrating how scouting information by the unmanned systems can potentially deliver fires in support of ground forces.

MTX opened the door to making this a reality, laying the groundwork for automation of unmanned systems for generations down the line. The project is the culmination of decades of research by NPS faculty and students regarding how to integrate autonomous vehicles into naval operations.

NPS’ Center for Autonomous Vehicle Research, which Horner formerly directed, has labored for the better part of the last decade honing the finer points of getting a mix of unmanned systems to work together.

“What we had to develop was the capability to work with individual vehicles, then the vehicles together with respect to their [air, land or sea] domains, and then we could start thinking about how to work with them all together as an overall, cohesive whole,” Horner said.

Collaboration with NPS’ Consortium for Robotics and Unmanned Systems Education and Research, or CRUSER, enabled this to finally take shape. The MTX project aligns with CRUSER’s vision of integrating \ research efforts across discipline boundaries.

“That is the sweet spot right now: looking across domains, getting out of thinking of things as simply an air system or simply a sea or surface system,” said Dr. Ray Buettner, director of CRUSER.

There are challenges ahead for MTX, such as improving network performance. The November experiment relied on a fixed-point mesh network to supplement communications between the mobile assets, and its structured scenario ensured great data collection, but left little room for free play. The dialogue has now turned to how to move MTX forward, how to continue to add to the complexity and realism of the exercise.

“This is very much a crawl, walk, run sort of experimentation,” Good said. “We’re starting to take our first step ... But what you’ll see each year is that we’re going to add something new.”