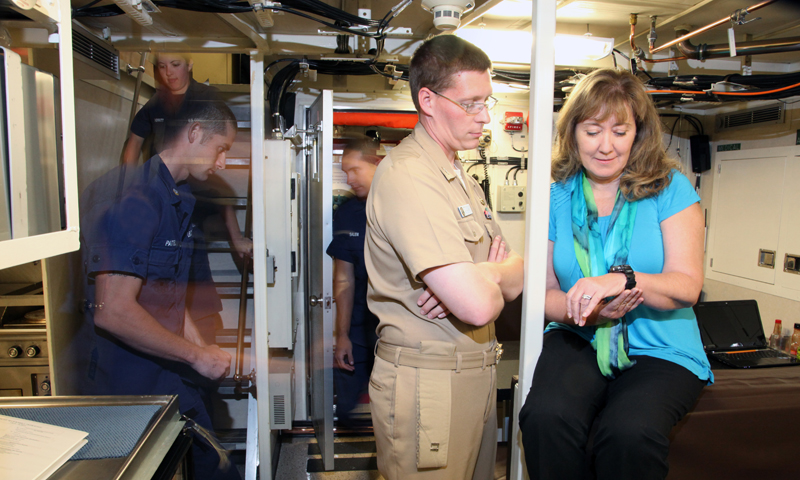 NPS operations research student Lt. Matt Yokeley and Associate Professor Nita Shattuck are on a mission to help Sailors at sea get the rest they need to optimally perform their duties. They spent four weeks at sea conducting sleep tests to prove the value of a revised watchbill that allows for a more regular sleep schedule.

For the Navy’s surface warfare community, sleep is a luxury not often afforded while on sea duty. The Navy’s standard 81-hour workweek means Sailors in the fleet often experience sleep problems serious enough to have researchers concerned that safety and performance on the job might be compromised. The human performance research of NPS Associate Professor Nita Shattuck and operations research student Lt. Matt Yokeley has caught the attention of surface warfare officers, even being featured in a recent issue of "Navy Times."

The pair has proposed a revised watchbill of three-hours-on-duty, and nine-hours-off, which they have dubbed the NPS Optimized Watchstanding (NOW) Schedule, in place of the traditional five-hours-on and 15-hours-off. After conducting four weeks worth of research aboard the USS Jason Dunham, during which time they tested Sailors on both the traditional watchbill, and the revised watchbill, they found that, overall, the Sailors are more alert when the work day is on a 24-hour schedule. In addition, Sailors overwhelmingly prefer the NOW schedule.

“The traditional watch rotation for a four-section watch is five-on and 15-off. One big difference is that with the three-and-nine, you maintain a static watch, you stand the same watch time every day for a week or two,” Yokeley explained. “With the five- and-15, you are constantly rotating, because it puts you on a 20-hour workday. By doing that, you are constantly forcing yourself to shorten your day and move your daily sleep watch patterns. This disrupts the natural circadian rhythm that causes us to sleep and awake at certain times. And by constantly rotating, you’re throwing that rhythm out of whack.”

In the four weeks aboard the Dunham, Yokeley and Shattuck worked with the Commanding Officer (CO) and his crew to gather data on the Sailors’ alertness, sleep patterns, and overall feelings towards the traditional and NOW schedules. Using laptop computers stationed around the ship, they were able to collect Sailors’ reaction times using a device called the psychomotor vigilance test. Crewmembers wore specialized sleep watches called actigraphs to gather information about their individual sleep patterns. This allowed the research team to determine how much sleep Sailors were actually getting on both schedules. They also used the Fatigue Avoidance Scheduling Tool, a tool developed over many years by the DOD based on the Sleep, Activity, Fatigue and Task Effectiveness model.

“We collected four weeks of data on the same Sailors, two weeks on either schedule. We looked at their sleep and reaction times on the two schedules and we also asked them how they felt about the new schedule,” said Shattuck. “The results show how alert they are on the two different schedules. There was a statistically significant improvement in performance in the period of time when it’s really hard to stay awake, which is midnight to 4:00 a.m. The bottom line here is these guys were more alert and they liked it better than the conventional watch standing schedule.”

Shattuck’s first foray in U.S. Navy sleep patterns occurred in 2002 when she was asked to look into the issues related to sleep after numerous Sailors aboard the USS John C. Stennis complained to the ship’s medical team of sleep problems. Based on her background research in how sleep impacts human performance, Shattuck was invited to study the sleep patterns of the Sailors to find out more about the issues they were experiencing.

“The senior leadership of the Stennis wanted to know if the sleep problems were as serious as they appeared to be. The Stennis was in an unusual situation in that the entire ship was working the night shift,” said Shattuck. “This was during Operation Enduring Freedom and they were conducting all flight operations, including launch and recovery of aircraft, at night rather than during the day. And we found that Sailors were getting very little sleep —and those who worked topside got even less sleep than Sailors working below decks. We looked closer at this finding and saw a recurring pattern where many of the Sailors who worked below decks also stopped smoking cigarettes on the deployment. And we wanted to figure out why. “

“As it turns out, they told us that if they came topside to smoke, they could see what time of day or night it was,” she explained. “And if they came up at the end of their shift when the sun was coming up, they just couldn’t go to sleep. So, many of them stopped smoking because they decided it wasn’t worth missing their sleep. If Sailors would stop smoking to get help them get more sleep, sleep is a very important drive.”

The lessons learned aboard the Stennis were just the beginning of numerous student thesis projects on sleep, the most recent of which was Yokeley’s. Shattuck has seen the sleep data collection methods improve since her first paper and pencil surveys, but she sees it all leading to a solid research results supporting the three-and-nine watchbill, or something like it.

“The surface warfare officers understand that we need to fix this. With reduced manning, it just gets worse and worse, and the margin for error has gotten slimmer…because things move faster,” Shattuck said. “We operate on a 24/7 clock. There are operations all the time, and with the danger that lurks around every warship, Sailors must be alert.  There is little margin for error. It has become a more dangerous world, and because of that we need Sailors to be vigilant and ready to respond in an instant.”

And the feedback Shattuck has seen from the fleet thus far has been promising.  The trial run aboard the Jason Dunham was so successful that the CO agreed to maintain the three-and-nine schedule into a nine-month deployment to the Fifth Fleet. A number of Sailors will continue to wear the sleep watches, providing Shattuck and future students with plenty of data for further research. Yokeley will be graduating from NPS in September, but is already pleased with the result of their work. The ultimate goal, he explained, is to help the surface warfare community get the rest they need to optimally perform their duties at sea.

“Really, for this to be implemented, it’s going to have to start from the ground up. It’s going to be commanders at sea, taking the initiative,” Yokeley said. “All it takes is a willingness to change how you look at the problem, a willingness to think about how to do things better and how to do better by our Sailors. Because our Sailors are our most important assets, and we need to take care of them and make sure that their needs are met.

“And I think that by doing that, by getting ships to adopt this plan, it will really go a long way in showing Navy leadership that this is something that we need to do. And as more ships do it, there will be more lessons learned,” he added. “We will find out what works and what doesn’t work. The research that we have done is not the end-all be-all. It is an iterative process. It’s going to take time to figure out how to do it right. But again, it’s going to take those individual commanders on the front lines, willing try something different.”